Motorola One Macro comes with a 6.2-inch display and a waterdrop notch. There's a triple camera setup comprising of a 13MP primary, 2MP macro lens and 2MP depth camera.

Motorola launched the Motorola One Zoom smartphone at IFA 2019 last month and now it appears that the company is ready to launch yet another One series smartphone. The Motorola One Macro has now been spotted online in the form of an official-looking render and specifications.

A Saudi Arabian retailer Extra posted an image and specifications of the Motorola One Macro on its website. Screenshots shared by /Leaks show that the phone comes with a 6.2-inch display and is powered by an Octa-core processor. 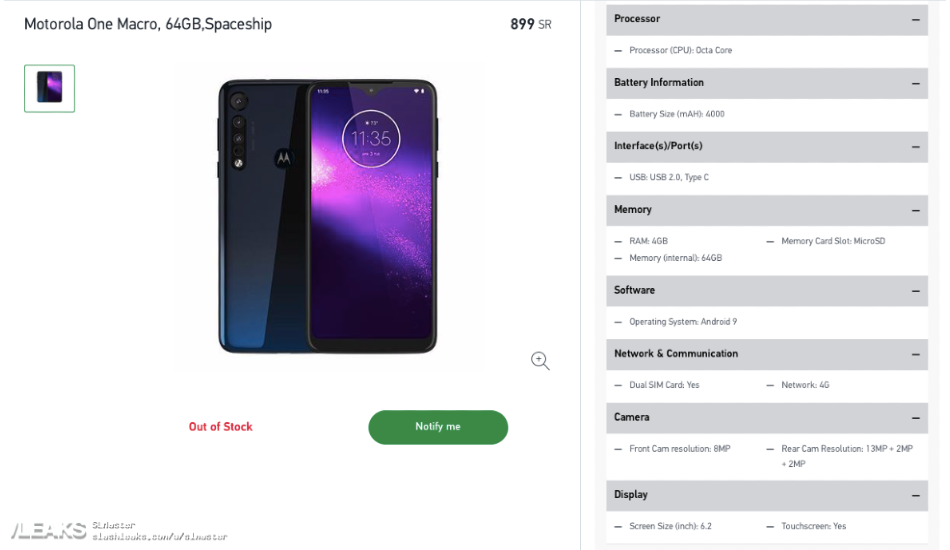 The device listed on the retailer site is named as Spaceship which could be the name of the colour variant of the One Macro. Besides that, the listed variant comes with 4GB RAM and 64GB internal storage. There is a micro SD card slot for expandable storage. The phone will run on Android 9 Pie.

Motorola One Macro comes with three cameras comprising of a 13MP primary, 2MP lens (possibly a macro, judging by the name of the device) and 2MP depth sensor which is tagged alongside the laser-assisted autofocus sensor and an LED flash. There will be an 8MP camera inside the waterdrop notch on the front.

The phone is backed by a 4,000mAh battery and has a USB Type-C port for wired connectivity and charging. The phone offers Dual SIM support and 4G for wireless connectivity. There’s a read fingerprint scanner embedded into the Motorola logo at the back.

Before this, the Motorola One Macro has reportedly received certifications from FCC in the US and NCC in Taiwan. The phone has also been spotted on Geekbench with an Helio P60 chipset clocked at 1.9GHz and 2GB of RAM and scored 1429 and 5584 points in single-core and multi-core tests respectively. It’s unclear if the phone will come in a single variant or multiple configurations.

The retailer site Extra also disclosed the alleged price of the Motorola One Macro as SAR 899 (approx. Rs 17,100).

Moto Razr foldable phone to arrive before the end of 2019

Besides the upcoming Motorola One Macro, it’s established that the company is working on a Moto Razr foldable phone that could cost nearly Rs 1,20,000. Cnet reports that Moto Razr is now touted to hit the market before the end of 2019 to compete with Samsung’s Galaxy Fold and Huawei’s Mate X. The upcoming foldable phone from Motorola will fold like its original Razr phone used to and will thus be a flip phone but with a touchscreen on the inside. 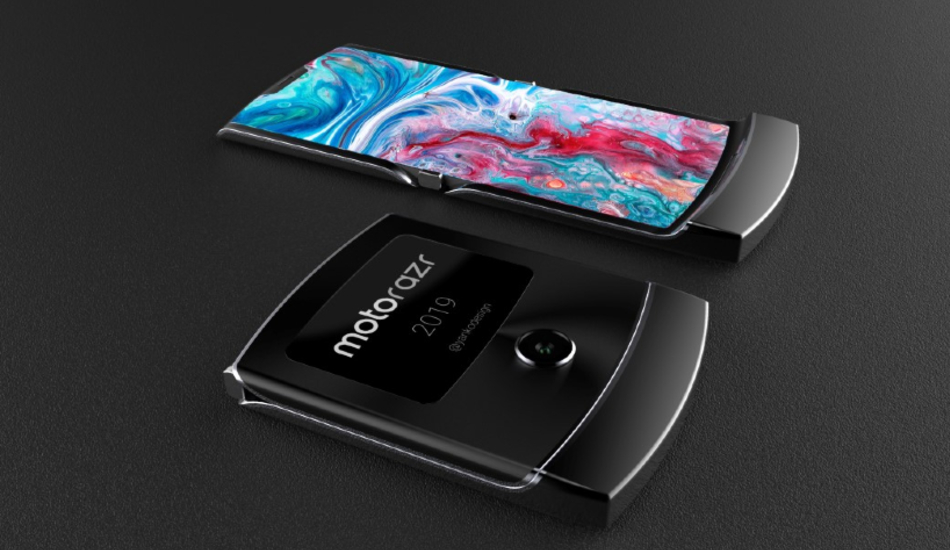 There will be a smaller screen on the outside which is expected to display notifications and status icons. Since the power unit is comparatively smaller, we can expect the Razr foldable phone to be as slim and having the same thin profile as the original Razr phone.

The Razr is expected to be powered by a Snapdragon 710 SoC and coupled with 4GB or 6GB of RAM and 64GB or 128GB of onboard storage. Previous rumours point out that the Razr foldable smartphone will have a primary display of 6.20-inch with a resolution of 2142 x 876 pixels. The secondary display will feature a resolution of 600 x 800 pixels. The Motorola Razr will be backed up by a 2730mAh battery with some kind of fast charging support.