Motorola was earlier reported to be working on a vast portfolio of smartphones for this year. The brand is expected to launch several products in different series and the latest leak spills some beans about the upcoming smartphones.
Evan Blass, a known tipster, has shared some leaked presentation slides that showcase the upcoming Motorola smartphones. The leaked image shows complete lineup of including Moto Z, Moto X, Moto G, Moto E and Moto C series.
Moto X (2017) or Moto X4
According to the latest leak by the tipster, the upcoming Moto X (2017) would be simply named as Moto X4. The smartphone will carry a metal body coupled with a 3D glass finish at the front. The smartphone will also boast a dual-camera setup along with IP68 certification making it water and dust resistance. The phone is also touted to feature some AI integration, always-on voice and LTE modem with support for 3x CA.
The leaked presentation further reveal some key specifications of the device including a 5.2-inch Full HD display, Qualcomm Snapdragon 660 processor with Adreno 512 GPU, 4GB RAM and 64GB internal storage, Android 7.1 Nougat, 3,800mAh battery with Turbo charging, 4G VoLTE, Wi-Fi, Bluetooth 5.0 and Dual SIM support.
Moto Z lineup
The leaked slides reveal that the company will be launching Moto Z Play and Moto Z Force this year and the series will support Moto Mods as well. The Moto Z Play is said to feature a 5.5-inch Full HD display, while the Moto Z Force will allegedly come loaded with ShatterShield display, which will probably make the screen shatterproof. Further, the Moto Z Force will also offer 1GB LTE speed. Previous rumours indicate that the Moto Z Play will come with a dual-camera setup.
Moto G Lineup
Motorola recently introduced the Moto G5 Plus and Moto G5, which garnered a lot of praise from all corners of the tech town. It seems that the company will take this legacy forward and will introduce two new devices under the G series. The leaked slide reveals that the company will launch Moto GS and Moto GS Plus smartphones this year.
The leak reveals that the Plus variant will sport a 5.5-inch full HD display along with dual-camera setup, while the smaller sibling will come loaded with a 5.2-inch FHD display with a metal body. 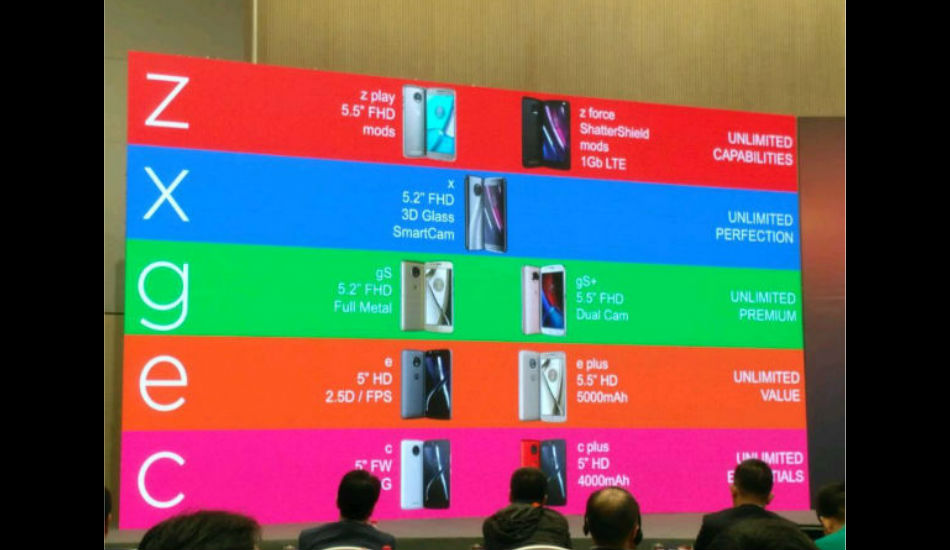 Moto E lineup
The slide shows that the company will launch the fourth generation of Moto E and Moto E4 Plus. Starting with the Moto E4, the device will come with a 5-inich HD display with 2.5D curved glass, while the Plus variant will come loaded with a 5.5-inch HD display and will probably be backed up by a 5000mAh battery.
Previous rumours indicate Moto E4 will be powered by a MediaTek MT6737m processor. It will have 4GB of RAM and 16GB of internal storage. On the camera front, it will feature a 5-megapixel rear camera and a 2-megapixel front camera. The device would run Android 7.0 Nougat out of the box backed up by a 2,300 mAh removable battery.
Moto C lineup
Lastly, the leak also confirmed that the company will be launching the entry-level Moto C series, which include Moto C and Moto C Plus. The Moto C will feature 5-inch FWGA display, while the Plus 5-inch HD display along with 4000mAh battery.
Previously, both the devices are reported to boasts MediaTek processors. Moreover, the Moto C Plus will be strictly a 4G LTE-enabled device, the report adds. The major highlight of the device would be the 4000mAh battery. The smartphone is expected to be powered by a 64-bit quad-core MediaTek processor clocked at 1.3GHz. The device will be backed by 1GB/2GB RAM, depending upon the region while it will feature a 16GB internal capacity, with an expandable storage option via microSD card. On the camera front, Plus variant will come loaded with an 8-megapixel rear camera and 2-megapixel front-facing camera with rear and front flashes.
Meanwhile, Moto C would come in two variant, one with 3G connectivity, while the other sporting a 4G support. The Moto C 3G will be powered by a 32-bit quad-core processor, clocked at 1.3GHz, while the 4G variant will boast a 64-bit processor slightly underclocked at 1.1GHz. Both the variants will sports a 1GB of RAM and could be loaded with either 8GB or 16GB of internal storage, depending upon the region.
On the camera front, the Moto C will boast a 5-megapixel rear camera with flash (fixed-focus on 3G, auto-focus with 4G), along with a 2-megapixel front-facing camera with selfie flash as well. Further, both the variants will be powered by a 2350mAh battery.Moto X 2017, Moto Z, Moto G, Moto E and Moto C lineups leak surfaced online: Here’s everything you need to know