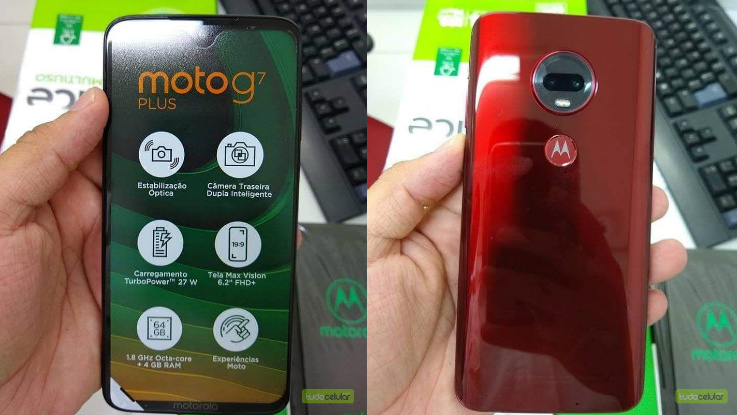 Moto G7 Plus will feature a 6.2-inch Full HD+ Max Vision display with a screen resolution of 2270 x 1080 pixels. Interestingly, the phone will also be equipped with optical image stabilisation (OIS) for its dual-camera setup at the rear.

Motorola is all set to unveil its next-generation of Moto G-series including Moto G7, Moto G7 Plus, Moto G7 Power and Moto G7 Play on February 7 in Brazil. Now, just ahead of official launch, real-life images of Moto G7 Plus has surfaced online revealing some key information.

The latest set of real-life images were obtained by Brazilian publication TudoCellular and it shows the Moto G7 Plus red colour variant as well as retail packaging. Starting with the design, the leaked images reveal that the smartphone will feature a waterdrop notch, which is now becoming a new trend in 2019. The back panel is made of glass and there is a dual-camera setup at the top-centre position. The fingerprint sensor can be found just beneath the camera module with Moto’s famous batwing logo engraved on it. 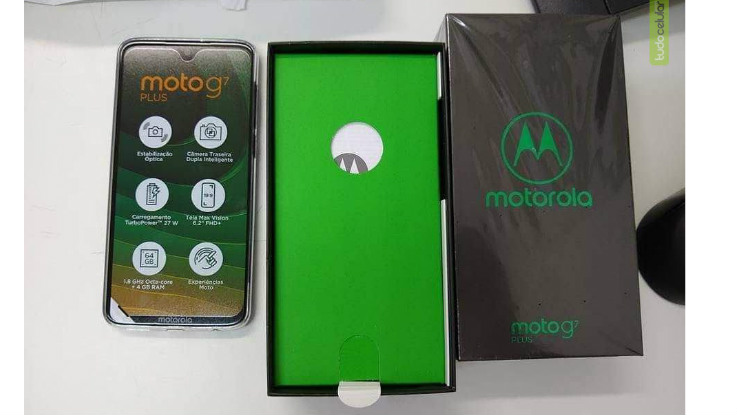 The hands-on images also reveal a sticker on the display that reveals key specifications. The important thing to notice here is that the upcoming smartphone will come loaded with 27W TurboPower fast charging support. The sticker further highlights that the smartphone will feature 6.2-inch Full HD+ Max Vision display with a screen resolution of 2270 x 1080 pixels. Interestingly, the phone will also be equipped with optical image stabilisation (OIS) for its dual-camera setup at the rear.

The leak further reveals that the phone will be powered by a 1.8GHz octa-core processor coupled with a 4GB of RAM and 64GB of internal storage. As per previous leaks, the phone will be equipped with a Qualcomm Snapdragon 636 processor. It is will be backed by a 3,000mAh battery.

On the camera front, the Moto G7 Plus will feature a dual-camera setup with a combination of 16-megapixel primary sensor with f/1.7 aperture and a 5-megapixel secondary shooter with f/2.2 aperture. For the front, there will be an 8-megapixel selfie shooter with f/2.2 aperture. Connectivity options include 4G LTE, Bluetooth 5, WiFi, USB Type-C, dual-SIM and more. The phone measures 157 x 75.3 x 8.27 mm and weighs 172 grams.