Moto E6 Plus to be launched soon in India on Amazon

Moto E6 Plus phone will be available on Amazon India upon its launch in India.

The Moto E6 Plus has been spotted on GeekBench benchmarking website revealing its key specifications. Additionally, the smartphone has also been leaked because of a prematurely launched Google advertisement revealing that the phone will be available on Amazon India upon its launch in India.

Google is known to push relevant ads when users search for something. When we searched Moto E6 Plus on Google, the search engine accidentally showed a Google Ad campaign for the smartphone. So it seems like the phone will be soon launched in India.

As per the GeekBench listing via MySmartPrice, the Moto E6 Plus smartphone will be powered a 12nm MediaTek Helio P22 octa-core processor clocked at 2.0 GHz. In addition to the chipset, the Geekbench listing also confirms that the smartphone will feature 2GB of RAM. 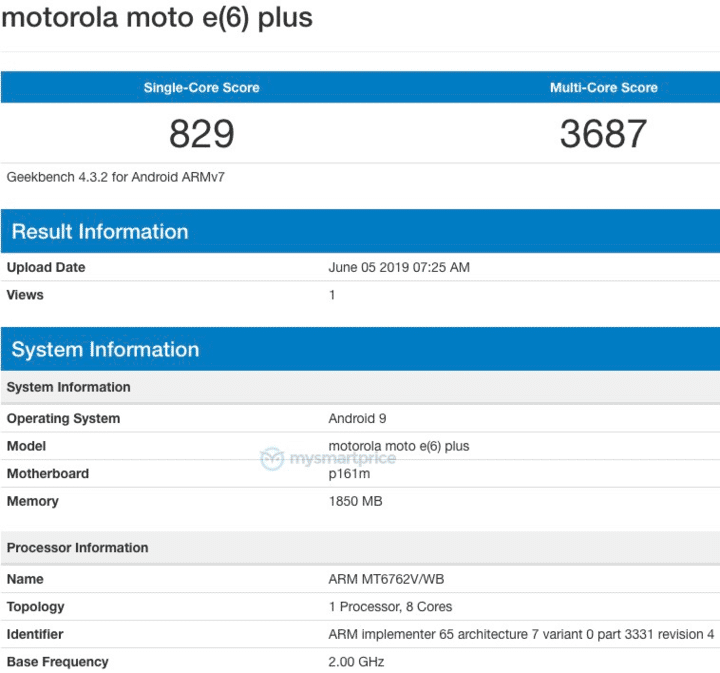 For the software, the Moto E6 Plus will run Android Pie out of the box. In the GeekBench listing, the phone has scored 829 points in the single-core and 3687 points in the multi-core test.

Meanwhile, Motorola has scheduled a launch event to be held on June 20 in India where it is expected to launch the Motorola One Vision. The phone features 6.3-inch Full HD+ LCD display with 1080×2520 pixels resolution, 2.2 GHz Octa-Core Exynos 9609 processor coupled with 4GB RAM and 128GB storage. The smartphone is backed up by 3500mAh battery with 15W TurboPower fast charging and it runs on Android 9.0 (Pie) operating system out-of-the-box.