Modu T, worlds lightest 3G full touch handset launched in India by Micromax, plans to launch two new jackets Textify and Boostify by January in India.
The concept of providing jackets, add on attachments, instead of inbuilt features helps basic phone to be a simple and user friendly. It also gives freedom to the user to choose additional features based on how they want to use their phone. 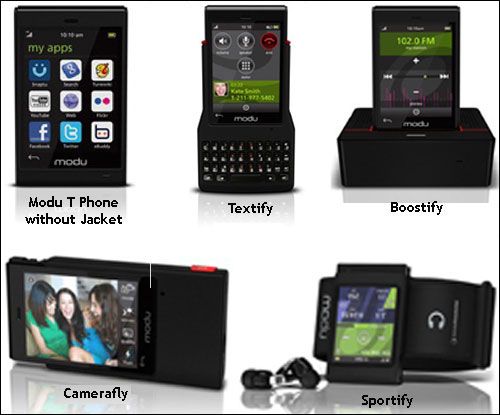 The phone has been made by Israeli company Modu and was introduced in India by Micromax last month. At present Modu T comes with two jackets Sportify and Camerafly which are bundled with the handset.
Perhaps the most interesting jacket is Sportify, which is meant for joggers and displays the calories burnt and distance travelled while running or walking. It has a handsfree and armband, and can also be used to listen to music while exercising.
Another jacket, Camerify, is a 5 mega pixel camera with flash.
Apart from that, Modu T’s soon to be launched jacket Textify is a Qwerty keypad for emailing and messaging; while Boostify is a speaker dock, company claims that it will produce sound loud enough for a party in a small room.
Although their price hasn’t officially been revealed, these jackets could cost around Rs 2,500. The phone Modu T meanwhile is priced at around Rs 12,600.
The two new docks will be available bundled with the device as well as sold as independent attachments.
Micromax Modu T is a 3.5G phone and like the HTC Smart, it runs Qualcomm’s Brew OS. The phone runs on a QSC6270 processor with a custom swipe-controlled user interface and a 2.2 inch touchscreen that is capable of resolutions of up to 240 x 320 pixels.
It has the capacity for a 32 GB memory card while a new device comes with a 2 GB card. Modu T enables web access, instant messaging, and social networking through links on the phone. The phone also has a built in FM radio, GPS and music player.
Modu T has applications for YouTube, Google Search, Twitter, Facebook, Flickr, TuneWiki, eBuddy and Snaptu.
Going forward, Modu will launch its Modu W Android device with touchscreen that can access WiFi networks. In India, however, Modu W won’t arrive for another three months.