The company has started sending out media invites of the same, which is scheduled to take place at 3:30 PM IST.

As reported earlier, Micromax and BSNL are teaming up to launch a new 4G-enabled feature phone, known as Bharat One, in India. Now, the company has confirmed that it will be launching the phone tomorrow i.e. October 17, 2017.

The company has started sending out media invites of the same, which is scheduled to take place at 3:30 PM IST. The invite has the word “BHARAT”, which could mean that the company will be launching the Bharat One feature on the said date. 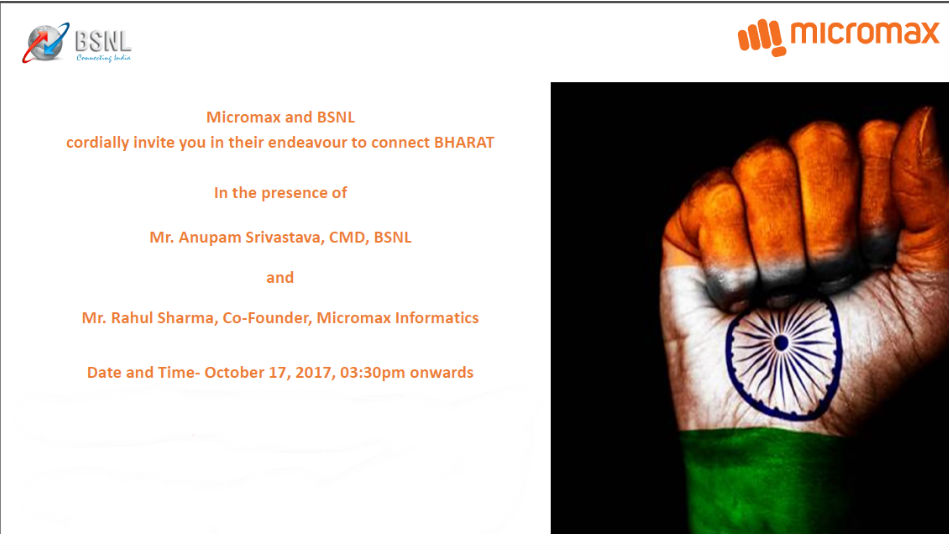 For the unintended, Micromax Bharat 4G VoLTE would be budget-centric feature phone to compete Reliance JioPhone. According to multiple reports, Bharat One will offer a larger screen size, more battery life, and a sharper phone camera as compared to an existing feature phone. At present feature phones normally offers 2-inch of screen sizes and 2,000mAh battery capacity. On the camera front, the best rear camera in a feature phone is of 2-megapixel and a VGA camera at front.

Previously, Airtel and Karbonn partnered to launch a new affordable 4G smartphone known as A40 Indian at an effective price of Rs 1399. The partnership between Airtel and Karbonn is part of Airtel’s ‘Mera Pehla 4G Smartphone’ initiative and the company has announced that it will partner with multiple mobile handset manufacturers to create an ‘open ecosystem’ of affordable 4G smartphones.

Vodafone and Idea Cellular are reportedly working on a series of low-cost 4G-enabled smartphones to take head-to-head competition with Reliance JioPhone and recently-launched Airtel A40 Indian smartphone. The companies will provide latest smartphones around or less than Rs 1,500.