Love Windows Phone 8’s theme but doesn’t want to pay thousands of bucks for that well then you have a good news as Lemon Mobile, an Indian brand which sources its phones from China, has launched a new phone with a user interface that looks exactly like Windows Phone 8 operating system’s interface.

The phone, called T109, is a Java based feature phone and not a smartphone. Interestingly, its screen’s size is 3.7 inch which too is a very common screen size for Windows Phone 8 devices from the likes of Nokia, Samsung and HTC. 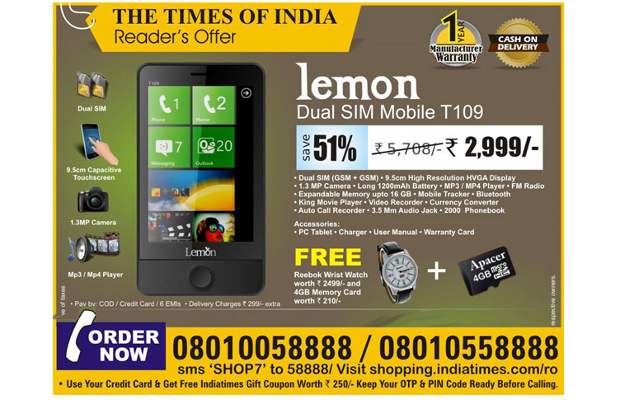 Lemon T109 is a very basic dual SIM feature phone with a 1.3 megapixel rear camera, 1200 mAH battery, and expandable memory slot for up to 16 GB.

You also get a Reebok watch and 4GB micro SD card for free with this phone which is priced at Rs 2,999. If you want to flaunt a phone which looks like a smartphone without smartphone price, then this is certainly a phone to look out for.