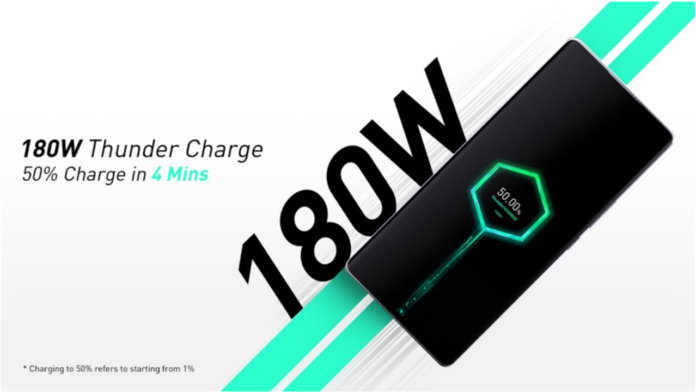 Infinix today unveiled its 180W Thunder Charge Technology, which will debut on selected Infinix flagship phones that will be announced in the second half of this year. The new technology will enable users to achieve a 50% charge of the 4500mAh battery in just four minutes, claims the brand.

How has 180W charging been made possible?

Regular smartphones with fast charging features generally use batteries with a charging rate of 1 to 3C, while 180W Thunder Charge uses batteries with a rate of 8C, which reduces the chances of the battery overheating due to the fast charging technology. Infinix says that it worked with the world’s leading battery manufacturers to develop a new 8C battery cell, which is the maximum charging rate rechargeable lithium battery in the industry at present.

The company says that the 8C cell has lower internal resistance when compared with the conventional single electrode lug structure, the 8C cell has a multi-electrode lug, which reduces more than 50% of the internal resistance and produces less heat. Furthermore, the 180W Thunder Charge uses two 8C-rated batteries in series, so the charging power of each battery is only 90W while being charged, reducing heat and increasing longevity.

Is it safe enough?

The 180W Thunder Charge from Infinix has 111 software and hardware security protection mechanisms to protect smartphones, chargers, and charging cables. The security protection is triggered during abnormal scenarios – such as high temperature, increased voltage, electromagnetic interference and more, to ensure the safety of the smartphone’s system.

Furthermore, 180W Thunder charge has 20 temperature sensors, which are distributed in USB inputs, charging chips, on the battery and other locations inside the device. The charge is monitored in real-time through an intelligent temperature control algorithm which keeps track of everything. While the device is charging, the smartphone’s temperature oil is kept below 43 ℃ ensuring a safe and fast charging experience without excess heat or battery degradation.

The 180W Thunder Charge cable has a built-in Infinix special encryption chip as well, which outputs 180W power transmission for a fast charge. 180W Thunder Charge can intelligently identify the cable’s power transmission capacity and adjust accordingly. If a different cable without Infinix’s special encryption chip is plugged into the device, it identifies the cable and limit power to 60W/100W to ensure a safe charge.

Present in the technology is the new semiconductor material GaN, which enables the 180W Thunder Charge to be resistant to a variety of environments with high temperatures above 40°C. Furthermore, the charger adapter is compatible with multiple fast charging protocols, and can perform a maximum of 100W fast charging for most electronic devices on the market, which include mobile phones, tablets, and laptops, claims Infinix.

Users can also use cables from other manufactures to charge Infinix devices up to 100W. 180W Thunder Charge has two separate charging modes, Furious Mode and Standard Mode. Furious mode can be activated at the click of a button giving users 180W super-fast charging.

Infinix’s competition is catching up where OnePlus and Realme are already selling smartphones in the market with 150W fast charging. In fact, Infinix also introduced 150W charging for one of its devices which never made it to India. However, Infinix claims that smartphones with 180W fast charging will arrive in the second half of this year. Moreover, Vivo seems to be working on 200W fast charging that could also debut soon with the iQOO 10 series.