Here's the comparison of Infinix Smart 5A with its top competitors including the Micromax In 2B and the Realme C11 (2021). 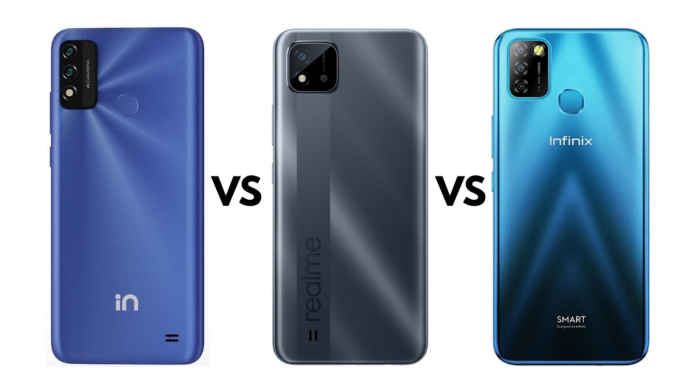 The latest entrant in the budget segment in the Indian market is Infinix Smart 5A. The device comes with an exclusive Jio lock offer where customers can get an upfront cashback of Rs 550. But with the primary sim slot of the smartphone locked with a Jio SIM. This is something unique but the Infinix Smart 5A will have to go through a lot of competition.

The Micromax In 2b features a 6.5-inch LCD display with HD+ resolution. The display has 400 nits brightness, 89 percent screen-to-body ratio, and 20:9 aspect ratio.

All of them have an identical display in terms of specifications and none of them is superior. However, it now depends on how the brand has set the colour tone of the display along with other aspects, which will decide the winner.

The Infinix Smart 5A is powered by the Helio A20 chipset and 2 GB of RAM and 32 GB of storage. For more storage, it features a dedicated microSD card slot.

How to use Locked Folder in Google Photos to hide your…

Under the hood, the In 2b is powered by a Unisoc T610 chipset coupled with up to 6GB of RAM and 64GB of internal storage. In addition, the memory can be expanded by up to 512GB via a microSD card slot.

If we look at processor specs, the Unisoc T610 is the most powerful out of these. The In 2b also runs on Android 11 Go Edition that should provide you with a smoother experience compared to other devices.

Although, it also depends on how Realme UI 2.0 and XOS 7.6 have been optimized that may output similar performance. In our experience, XOS hasn’t been the most user-friendly software, while Stock Android would come at the top, followed by Realme UI 2.0.

Smart 5A by Infinix features a dual-camera setup at the rear. There is a 13-megapixel primary camera and a 2-megapixel depth sensor. For the front, there is an 8 megapixels selfie sensor.

Coming to the cameras, the Realme C11 2021 comes with a single 8MP shooter with f/2.0 aperture, LED flash on the back paired with a 5MP selfie camera with f/2.2 aperture on the front for selfies.

Micromax In 2b is also equipped with a dual rear camera setup. This will include a 13-megapixel primary main camera and a 2-megapixel secondary sensor. In addition, for selfies, the phone sports a 5-megapixel front camera.

The Infinix Smart 5A is backed by a 5,000mAh battery that supports only 10W charging. The company claims a standby time of 35 days, up to 23 hrs at a stretch. In addition, you can enjoy up to 25 hours of music, 33 hours of non-stop 4G talk-time, 12 hours of web surfing and 14 hours of gaming.

The In 2b is fueled by a 5000mAh battery with 10W charging support. The company claims to offer 160 hours of music playback, 50 hours of talk time, 20 hours of web browsing, and 15 hours of video streaming on a single charge.

All of them again have a similar sized battery. It depends on software optimization and on a user-to-user basis regarding which one will give you the best battery life. All of them charge at identical speeds as well.

Smart 5A and the Micromax In 2b come with a rear-mounted fingerprint scanner. On the other hand, Realme C11 (202nd misses out on a fingerprint sensor which is a bummer.