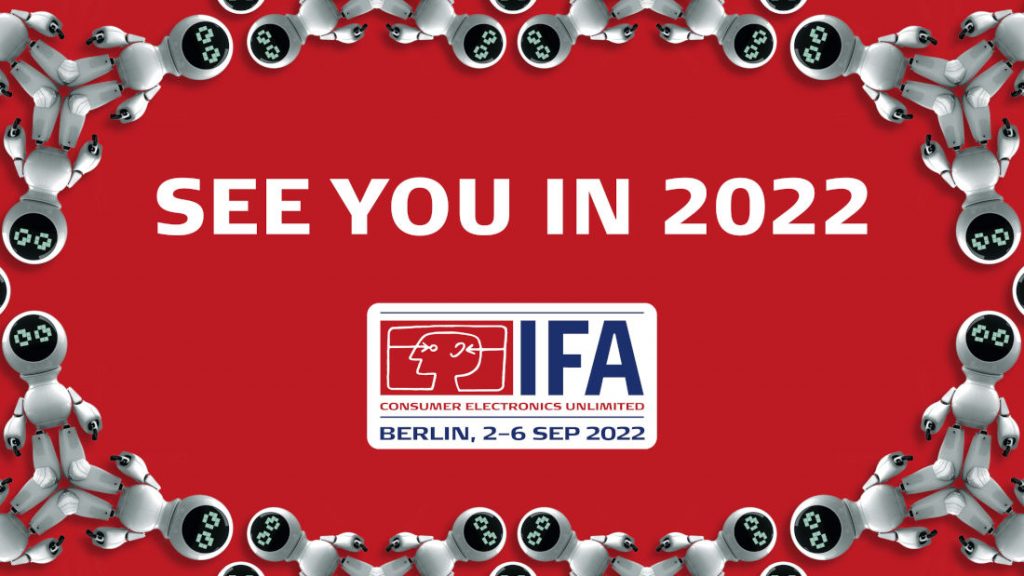 The decision was made following detailed conversations with public health experts and multiple stakeholders.

The tech expo IFA 2021 has been canceled because of uncertainties around the coronavirus pandemic in Germany and in other countries across the globe. The event was to take place from 3rd to 7th, September 2021. It will now be held from 2nd to 6th September 2022.

The decision was made following detailed conversations with public health experts and multiple stakeholders. However, IFA says that the preparations for Berlin Photo Week at ARENA Berlin and SHIFT Mobility are continuing as planned.

The organisers of IFA are now working with their partners from industry, trade and media to get everything ready for IFA 2022, which will be held as a full-scale live event at the Berlin exhibition grounds.

“Ultimately, several key global health metrics did not move as fast in the right direction as had been hoped for – from the rapid emergence of new COVID-19 variants, for example in South Asia, to continued uncertainties about the speed of the rollout of vaccination programmes around the world,” the organization said in a press release. “This in turn is adding uncertainty for the companies that were committed or interested in coming to Berlin, as well as media and visitors – all of whom have to plan well ahead with regards to budgets, investments and travel – not just for IFA, but all similar events around the world,” said IFA.

Another reason for cancelling IFA 2021 is the fact that Messe Berlin venue has been currently turned into a vaccination centre and an emergency hospital facility; both are now likely to be required for longer than originally anticipated.

“Innovation needs a platform; it needs the focus of global attention. That’s why brands and manufacturers across the tech industry were very keen to come to IFA Berlin 2021. Unfortunately, the latest public health developments introduced too much risk into everybody’s planning for the event,” said Kai Hillebrandt, Chairman of the Supervisory Board of gfu Consumer & Home Electronics GmbH. “There simply are now too many uncertainties. Therefore, right now it has become near impossible for anyone to responsibly plan their participation in any trade show.”

“We did not take this decision lightly. IFA Berlin is arguably the most important event of the year for brands and retailers alike. IFA Berlin connects our industry with trade visitors, media and real consumers like no other event. However, the health and safety of everybody has to be absolutely paramount. The efforts to contain this pandemic – from the roll-out of vaccination programs to the resumption of international travel – did not happen at the pace we had hoped for. Given these developments, this difficult and disappointing decision was inevitable,” said Martin Ecknig, the CEO of Messe Berlin.