Huawei India has confirmed this through its official twitter handle.

Huawei today has confirmed to roll out Android 7.0 Nougat update for its last year’s flagship device Huawei P9. Huawei India has confirmed this through its official twitter handle, which reads ‘User experience will be made smoother with the #EMUI 5.0 is expected to roll-out, globally in Q1 2017’. Once the global roll-out will start, subsequently Indian Huawei P9 users can also expect to see EMUI 5.0 update. 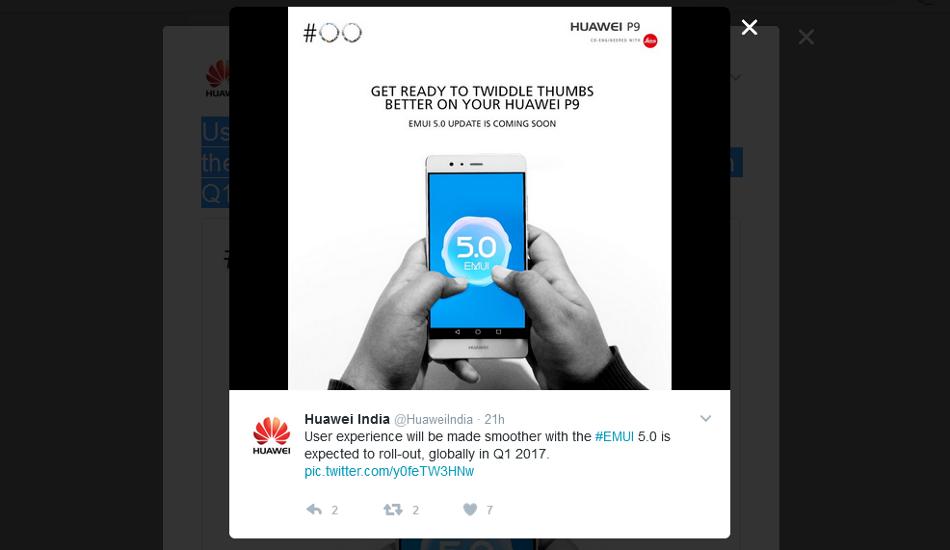 To recollect, last year in the month of December, the company had revealed the list of devices that will receive Android 7.0 Nougat update, which will come with Huawei’s EMUI 5.0, in the first round of roll out. As per the list, Huawei Mate 8, Huawei P9, Huawei P9 Plus, Huawei P9 Lite, Huawei Nova, Huawei Nova Plus will receive the Nougat update sometime in first quarter 2017.

As far as specifications are concerned, the Huawei P9 has a dual rear camera setup made in collaboration with Leica. The Huawei P9 has a 5.2-inch full-HD (1080×1920 pixel) IPS LCD display. Though it has a 4GB RAM/ 64GB storage variant, in India the Huawei P9’s 3GB RAM model was launched at Rs 39,999. This model has 32 GB of internal storage. It a sports a 3000 mAh battery and runs on Android 6.0 Marshmallow with EMUI 4.1 on top. It is powered by HiSilicon Kirin 955 octa-core processor and offers 4G connectivity.

Coming back to camera functionality, P9 features two 12-megapixel sensors, with one capturing light in colour, and the other captures monochrome images. It is expected that the combination will provide sharp and detailed images even in low light conditions.