The listing confirms that the smartphone is powered by the company’s own Kirin 980 7nm processor clocked at 1.8GHz along with 6 GB of RAM.

Huawei is all set to launch its upcoming flagship smartphones – Huawei P30, P30 Pro, and P30 Lite on 26th March in Paris, France. Now, ahead of the phone’s official launch, the Huawei P30 has been spotted on Geekbench. Earlier, Huawei P30 Pro was also spotted on the same website.

The Geekbench listing of the P30 reveals some important details related to the smartphone. It confirms that the smartphone is powered by the company’s own Kirin 980 7nm processor clocked at 1.8GHz along with 6 GB of RAM. 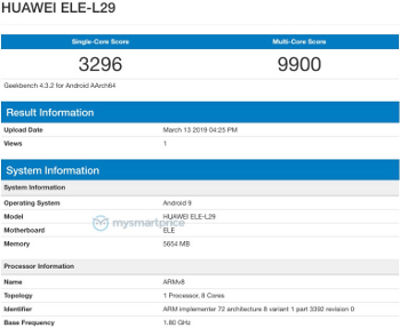 The phone has a model number “HUAWEI ELE-L29” on the GeekBench listing. As for the software, the smartphone will run on the latest Android Pie OS out of the box.

As per an earlier report, Roland Quandt revealed the RAM and storage options of the Huawei P30 Pro and Huawei P30. As per the leak, the Huawei P30 will be available in 6GB of RAM and 128GB of internal storage.

The GeekBench listing of Huawei P20 Pro revealed that the phone runs on Android 9.0 Pie and it comes with 8GB of RAM. The phone runs on octa-core processor clocked at 1.8GHz, which could be none other than Kirin 980 chipset.