This is in line with previous rumours where HTC U 11 was, indeed, touted to skip the 3.5 mm headphone jack.

HTC U 11 is set to launch on May 16 and rumours are not looking to stop as we now have a possible final render of the device. OnLeaks and 91Mobiles have now leaked a new HTC U 11 render showing the device in bright red colour. The back looks to be made out of glass and is extremely glossy, almost similar to that of HTC U Play and U Ultra while we failed to spot the 3.5 mm headphone jack. This is in line with previous rumours where HTC U 11 was, indeed, touted to skip the 3.5 mm headphone jack. 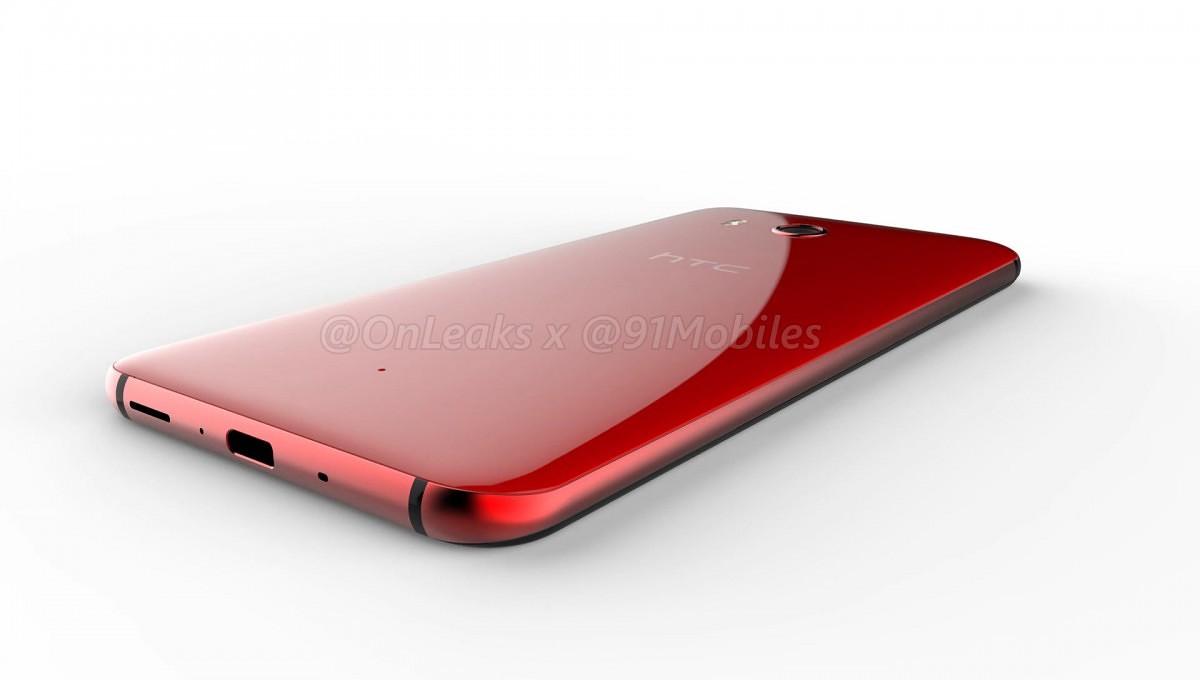 Based on the leaked render video, the power button, which is texturized, and the volume rockers are situated on the right side of the phone while we have nothing on the left side. At the bottom, we have USB Type-C port, a speaker grill and two holes out of which one seems to be the primary microphone while the other one is touted to provide additional noise cancellation. On the top, we get two holes again which again can be assumed as a secondary microphone and a noise cancellation additional microphone. Otherwise, as a wild guess, these might be a possible full-fledged implementation of HTC Sense Companion.

Apart from this, the screen looks to be slightly curved on the sides but due to being display switched off, we cannot comment on the functionality.

Keeping this aside, perhaps the most talked-about feature of the upcoming HTC U 11 is the Edge Sense support. A gesture support which is said to be infused on the side edges of the screen and will allow users to interact by ‘squeezing’ the edge of the phone frame.

According to various rumours, the functioning of the Edge Sense is interesting. Users need to short squeeze the Edge Sense in order to perform tasks like launch Camera, Google Assistant, HTC Sense Companion, or even turning on the Wi-Fi Hotspot.

In the camera department, the buzz is for a 12-megapixel rear camera and 16-megapixel front shooter. HTC U 11 will run on the latest Android 7.1 Nougat with company’s own Sense 9 UI running on top of it and it will be juiced up by a 3000mAh battery with Qualcomm Quick Charge 3.0. Further, it will support connectivity options including, Wi-Fi 802.11 a/b/g/n/ac, Bluetooth 4.2 and a fingerprint sensor integrated into the home button.