Samsung is working on its upcoming foldables and here’s our first look at the devices. 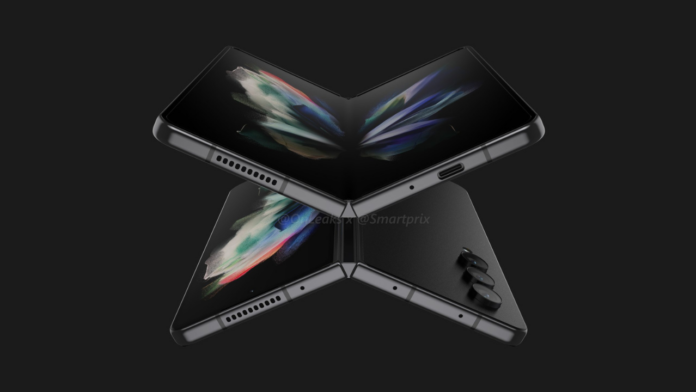 Tipster Steve Hemmerstoffer aka OnLeaks, has partnered with two separate publications to reveal the design renders of the Galaxy Z Fold 4 and the Galaxy Z Flip 4. Talking about the Z Flip 4, the leak suggests that it will have a design which will look similar to the current generation Galaxy Z Flip 3. However, there will be some minor changes to the dimensions. The handset should also be available in multiple colour options.

It will sport the same dual tone look with two cameras at the back. The phone continues to feature a narrow profile with a flip-style form factor like its predecessor. When unfolded, you will look at a display with a centred punch-hole cutout to house the selfie camera and a possibly better hinge design. The phone appears to have an aluminium frame and a glass back panel.

On the bottom, you get the USB Type-C port, primary microphone, SIM tray section, and speaker grille. The power button which will also act as a fingerprint sensor and volume rocker are on the right side. On the back, the Z Flip 4 has dual cameras, a secondary screen to display time, a music player, notifications, and more, and an LED flash. Not much is known about the internals of the smartphone at this point. However, we expect it to come with Snapdragon 8 Gen 1+ SoC, and as tipster Ice Universe recently revealed, it should pack a 3700mAh battery which will be an upgrade from the 3300mAh cell inside Z Flip 3.

Coming to the Z Fold 4, the second leak suggests that the Z Fold 4 will adopt the design from the Galaxy S22 Ultra and thats explainable considering both are top tier phones from Samsung. The Galaxy Z Fold 4 flaunts a 6.2-inch cover display and a 7.6-inch display inside when unfolded. It will be a high refresh OLED panel.

The camera module contains 3 lenses that are protruded and an LED flash. The device has flat sides and has a stereo speaker setup. It has a Type-C port at the bottom. There’s fingerprint sensor integrated power button on the right and the smartphone is further expected to sport an improved hinge design as well.