Google X which is expected to be made by Motorola is going to have a 1.5 GHz processor.

A new Nexus smartphone seems to be in the making. Named as Google X, the new handset comes with an all new Android 5.0.1, as per a listing on the Antutu benchmark.

As per the listing, there seems to be three versions of the handset. The top model has a 1.5 GHz processor with Android 5.0.1 operating system version while another comes with a 1.2 GHz processor but the same Android version. Another comes with a 1.2 GHz processor but with Android Jelly Bean operating system, however this may not be launched as Google phones (usually branded as Nexus) usually come with a brand new Android version. Thus probably the top model of new Google X phone with 1.5 GHz processor (in all likelihood a quad core processor based on Qualcomm 600 chipset) and Android 5.0.1 (which could be named as the Key Lime Pie) would be launched.

However, if the Antutu listing is to be believed, Google X will not be the fastest smartphone out there as it has got 15479 score which is much lower than Samsung Galaxy S4’s 24894 or even HTC One X+’s 16170. Lower level of performance could also be result of Google’s attempt to bring the phone at a very affordable price point similar to what it did with Nexus 7. 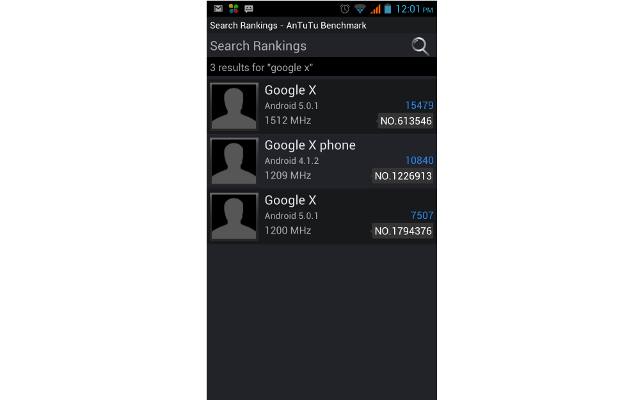 However this Antutu benchmark listing could very well be a hoax. But if true, this means that Google will unveil the phone in next couple of months.

No other detail about the phone is available. However next Nexus phone is going to be made by Motorola and this is likely to be the rumoured Motorola X phone.

The phone could have a smaller screen than 5 inch as earlier this month while talking about the upcoming Google smartphone, Google’s executive chairman Eric Schmidt said “If you like smaller form-factor devices or stock Android, you’re going to be excited.”