Google made a bunch of announcements at its I/O 2022 event including Pixel Watch, Pixel Buds Pro and more. 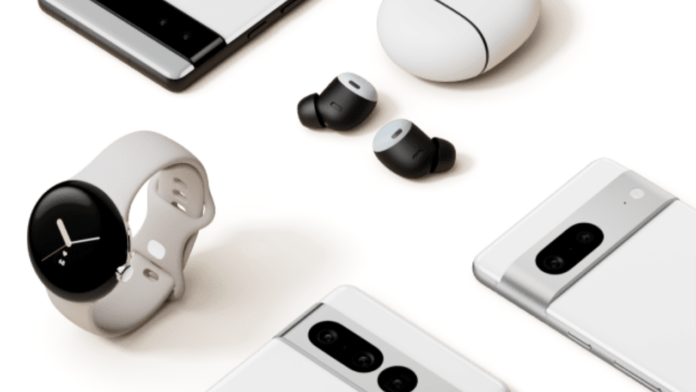 Google I/O Day one concluded yesterday with a bunch of announcements on both the software and hardware sides of things. Where Google announced that the Pixel 7 series is arriving this fall and also gave us a brief look at the smartphones, it also announced a bunch of new features for Google Maps, Google Meet, Android 13, Google Assistant and much more. So here’s every new announcement made at Google I/O 2022, from the Pixel 7 series to Android 13 and more:

Google not only teased the Pixel 7 series but also announced a bunch of other hardware including Pixel Buds Pro, Pixel Watch as well as the Pixel 6a.

The Google Pixel Watch runs on the latest Wear OS and features a circular display with minimal bezels and a dome-shaped design. It has a curved glass on the front. The watch has a stainless steel build. It also features a crown on the right which will supposedly be used for navigating throughout the UI.

The Pixel Watch also comes with customisable, swappable wrist bands that can seamlessly attach. Further, Google is claiming that the Pixel Watch runs an improved Wear OS software which is more fluid with navigation and smart notifications.

“It’s all designed to be tappable voice-enabled and glanceable so you can be more present at home, at work or on the go”, said Rick Osterloh, SVP, Devices and Services at Google, during the keynote.

For a seamless experience, you get access to Google’s services on your wrist with the Pixel watch which includes Google Assistant, Google Maps, and Google Wallet. Google has also integrated a feature where the watch acts as a remote for compatible smart home devices using the Home app for Wear OS.

Google has additionally integrated Fitbit within the Pixel Watch to deliver “industry-leading health and fitness experiences” out-of-the-box. Google said that the watch provides continuous heart rate and sleep tracking. The Pixel Watch also works with the Find My Device app which can track the location of a lost Pixel phone, earbuds, or any other supported devices on a map available on their wrist.

The Pixel Buds Pro are the most premium TWS offering by Google as of yet. It carries beam forming microphones that use noise suppression algorithms trained with machine learning to suppress wind traffic and other background noise. These earbuds pack a custom audio chip that is claimed to deliver power efficiency so users get a playback time of up to 11 hours of seven hours with ANC turned on.

Coming to ANC, the Pixel Buds Pro not only supports that but also include a transparency mode that helps users hear ambient sound easily. Moreover, the buds will also get Spatial Audio support later this year. This makes the Pixel Buds Pro a direct competitor to the Apple Airpods Pro.

As the buds support Google Assistant built-in, one can use it to translate in 40 languages or ask the assistant to get walking directions, without requiring to use your phone. The charging case has a USB Type-C for wired charging as well as support for Qi wireless charging.

The buds also include support for multipoint connectivity to let users connect them with “compatible phones, tablets, laptops, and TVs” simultaneously. Users will also be able to find their Pixel Buds Pro using Find My Device in case they lose the earbud. The Pixel Buds Pro use Bluetooth v5.0 and can also be paired with any Bluetooth v4.0+ device, including Android and iOS devices as well as tablets and laptops.

Google also gave us a brief look at its upcoming Pixel flagships during the I/O 2022 keynote, which will launch later this year. It is confirmed that the smartphones will be powered by the next generation of Google’s Tensor SoC, and will run on Android 13 out-of-the-box. The design of the smartphone looks similar to that of the Pixel 6 series but the camera bar is now made up of aluminium instead of glass. Moreover, the triple camera setup (on the Pixel 7 Pro) inside the bar is also placed differently and in a different shape. The Pixel 7 on the other hand will have dual cameras.

Lastly, the company also announced that it is working on an Android-powered tablet that is expected to arrive sometime in 2023. Google’s Senior Vice President of Devices and Services Rick Osterloh confirmed that the tablet will be powered by a Tensor SoC. Google also announced the Pixel 6a at the I/O 2022 event as well.

Google also announced a bunch of updates to Wear OS. The company is bringing Emergency SOS to Wear OS and has started allowing its users to instantly contact their trusted family members or call an emergency service directly from their smartwatch. Google is working with various partners to enable this feature. Further, Google announced that it is soon bringing Google Assistant to Samsung Galaxy Watch 4 series. In addition, more apps are being added to Wear OS. Apps such as SoundCloud and Deezer will debut on smartwatches based on Wear OS later this year.

Android 13 Beta 2 is now available with a bunch of new features including a unified Security & Privacy settings page, new media control featuring the album’s artwork, and a new photo picture that lets users to select the exact photos and videos that they want to grant access to. Further, Android 13 will bring features to help those who are multilingual. It will help you use language as fluidly as you do in real life, so you can select a different language preference for each of your apps in Settings.

You can also get Android 13 Beta on select phones, tablets, and foldables from Google’s partners who are working to deliver quality from day one, including ASUS, HMD (Nokia phones), Lenovo, OnePlus, Oppo, Realme, Sharp, Tecno, Vivo, Xiaomi, and ZTE. Google is also optimising Android 13 for larger screens such as a tablet.

Google is now bringing an immersive view in Google Maps which fuses together billions of Street View and aerial images to create a rich, digital model of the world. With the new immersive view, you’ll be able to experience what a neighborhood, landmark, restaurant or popular venue is like — and even feel like you’re right there before you ever set foot inside.

Immersive view will work on just about any phone and device. It starts rolling out in Los Angeles, London, New York, San Francisco and Tokyo later this year with more cities coming soon. Further, Google recently launched eco-friendly routing in the U.S. and Canada, which lets you see and choose the most fuel-efficient route when looking for driving directions — helping you save money on gas. “Since then, people have used it to travel 86 billion miles, saving more than an estimated half a million metric tons of carbon emissions — equivalent to taking 100,000 cars off the road. We’re on track to double this amount as we expand to more places, like Europe”, says Google.

Lastly, Google is making its Live View available to developers through the new ARCore Geospatial AP. Live View helps you find your way when walking around, using AR to display helpful arrows and directions right on top of your world. It’s especially helpful when navigating tricky indoor areas, like airports, malls and train stations.

Google Meet is getting a bunch of new features as well that have been announced at Google I/O 2022. The video calling service is getting Portrait to restore which uses Google AI technology to improve video quality, so even if you’re using Google Meet in a dimly lit room using an old webcam — or maybe you’ve got a bad WiFi connection — your video will be automatically enhanced. Other new features include portrait light, de-reverberation, Live Sharing, extending auto-summaries to Spaces, automate transcriptions, and security protections.

Google Assistant’s first new feature announced at I/O 2022 was Look and Talk, which is beginning to roll out today in the U.S. on Nest Hub Max. Once you opt in, you can simply look at the screen and ask for what you need. It’s designed to activate when you opt in and both Face Match and Voice Match recognize it’s you. And video from these interactions is processed entirely on-device, so it isn’t shared with Google or anyone else.

Google also noted that the feature work across a range of skin tones and for people with diverse backgrounds. Further, Google is expanding quick phrases to Nest Hub Max to let users skip saying “Hey Google” for their most common daily tasks. This means that you will be able to turn on the lights in your room by saying, “Turn on the living room lights,” without saying the hotword first.

Lastly, Google is also building new, more powerful speech and language models that can understand the nuances of human speech — like when someone is pausing, but not finished speaking. “And we’re getting closer to the fluidity of real-time conversation with the Tensor chip”, said Google.

Google also announced that it is releasing a new skin tone scale called the Monk Skin Tone (MST) Scale based on the research conducted by Harvard professor and sociologist Dr. Ellis Monk. This will help bring more inclusive of the spectrum of skin tones, the company said.

“The MST Scale will help us and the tech industry at large build more representative datasets so we can train and evaluate AI models for fairness, resulting in features and products that work better for everyone — of all skin tones. For example, we use the scale to evaluate and improve the models that detect faces in images”, said Google.

Google Workspace is also getting new improvements where the company is adding security protections that were a part of Gmail to Google Slides, Docs, and Sheets. The company claimed that these protections will help users prevent from opening documents that contain phishing links and malware or other viruses, using automatic alerts.