Google has introduced new Play Music All Access service for $10monthly subscription. Along with that Google has also refreshed the Google Music app for the Android devices.

As simple as it sounds, the All Access is a monthly subscription based music service that aides discovery of new songs-artists and provides unlimited access to the large library. Users can either create their own custom playlists or create a Radio Mix based on automated recommendations. 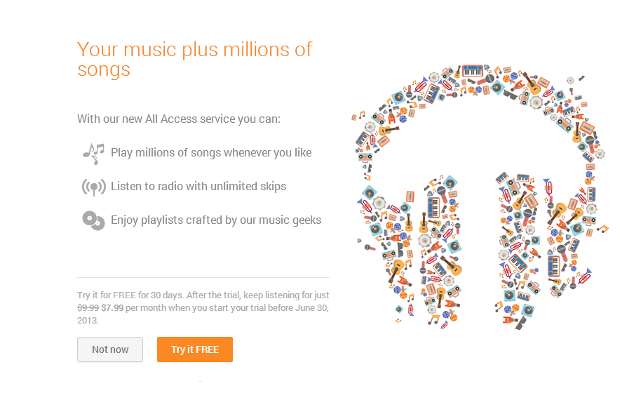 Along with access to millions of songs, the music can be played anytime through the new updated Google Music App for Android and also via the Google Play Music’s web interface.

When the user wants to create an auto playlist, then an automated and customizable “radio” channel is created for the user with list of recommended songs. These recommendations are derived based on the songs uploaded, purchased, played, genre and popularity of the artists.

Users can create “Radio” stations/channels consisting of tracks from particular artists. This automated playlists and Radio stations will carry list of songs that can be re-organized and customized – i.e. some tracks can be deleted too.

Thus All Access allows creating radio without rules based on tracks already owned-uploaded by the user and the ones that exists in Play Music library. Initially, the Play Music: All Access subscription service will be accessible only for the US residents. Google plans to make this service available to other regions in phase wise manner.

The Instant Mixes allows creating mixes based on the songs on the device and others available as free (for the users outside US). Playlists are automated playlist based on songs added and the ones created manually by the user. Over all App experience is very smooth and clean. The updated Google Play Music app can be downloaded from the Google Play Storestore

With the new Google Play Music: All Access service, Google has indirectly taken up the competition against Spotify, Pandora, iTunes, and several other music services offered by Sony, Nokia and other handset makers.