The handset is based on the Android 6.0.1 Marshmallow operating system.

A new Coolpad smartphone with the model number Coolpad R116 has now been spotted on a GeekBench benchmarking website, indicating a possible launch in near future. The listing throws light on some of the major specifications for the mysterious smartphone.

In the GeekBench listing, the Coolpad R116 scored 1440 points in single-core test and in muli-core test it scored 2697 points. As per the listing on Geekbench, the Coolpad R116 has 3GB RAM and is powered by Qualcomm Snapdragon 430 or 435 1.40 GHz octa-core processor. The handset is based on the Android 6.0.1 Marshmallow operating system. 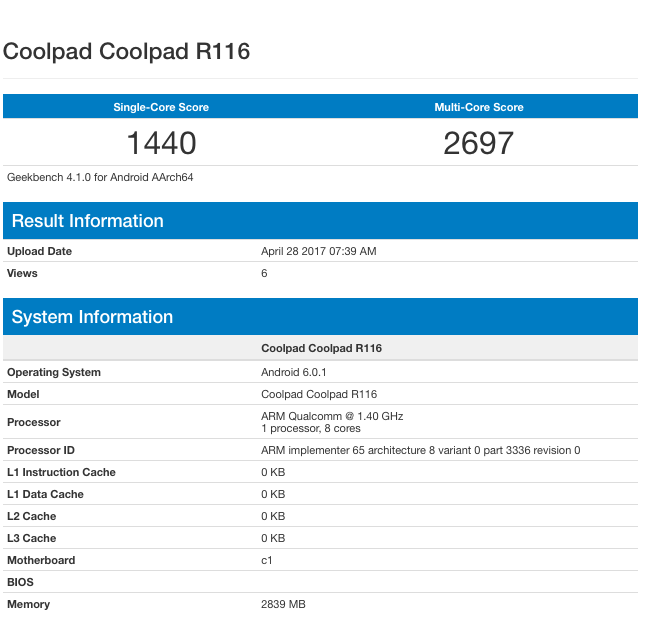 Postthis listing, we can expect some more leaks in coming days which can reveal the specifications, launch date and price of the phone. So stay tuned to The Mobile Indian for latest updates on this.

Meanwhile, Coolpad launched its Note 5 Lite in India for Rs 8,199. The handset boasts a metal unibody design and a 5-inch HD display with a screen resolution of 1280 x 720 pixels coupled with 2.5D curved glass. The device is powered by 64 bit 1.0 GHz quad-core MediaTek MT6735CP processor, along with Mali 720 GPU. It is backed by a 3GB of RAM and 16GB of internal storage which can be further expanded up to 64GB via microSD card slot. On the camera front, the device sports a 13-megapixel rear camera coupled with an 8-megapixel front-facing camera alone with front flash. The smartphone runs on Android 6.0 Marshmallow with company’s Cool UI 8.0 running on top of it. The device is juiced up by a 2500mAh battery which the company claims give a standby time of 200 hours.