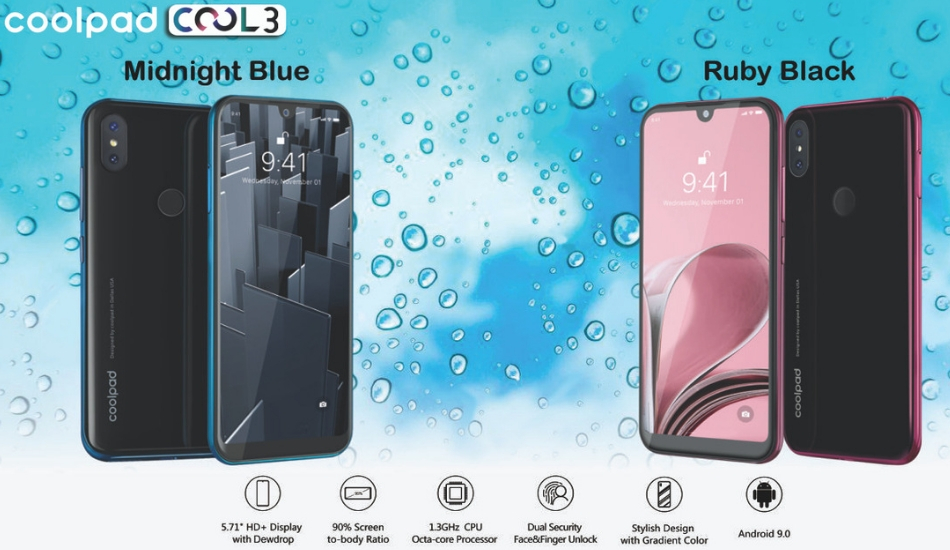 The phone will be featuring tiny dewdrop screen and glossy Back panel with multiple colour options.

Coolpad has launched the Coolpad Cool 3 in India. The smartphone comes with a price tag of Rs 5,999 and it will be available in online stores by end of this week and dates about offline availability has not been shared. It seems the company has just shared an update as nothing concrete about the availability has been shared.

The major highlight of the smartphone is the new Dewdrop notch. The phone features a dual-colour glossy back cover with edges highlighting in different colours. The phone will be available in Midnight Blue, Ocean Indigo, Teal Green and Ruby Black colour options.

Jumping straight to the specifications, the smartphone features a 5.7-inch HD+ display and 90 percent screen-to-body ratio. It is powered by an octa-core Unisoc processor clocked at 1.3GHz. The phone is backed by a 2GB of RAM and 16GB of internal storage.

On the camera front, the phone features a dual-camera setup at the back with a combination of an 8-megapixel primary lens and 0.3-megapixel secondary shooter. For the front, there is a 5-megapixel shooter for selfies and video calling. The Coolpad Cool 3 runs on Android 9.0 Pie and runs on 3000mAh battery. It is equipped with Face Unlock and there is a fingerprint sensor at the back panel.

Coolpad will be launching Coolpad Cool 3 in India on 5 February. The company has now released a teaser for the upcoming launch which has revealed that it will be featuring dewdrop notch display.

The announcement comes as Coolpad’s effort into making a strong comeback in the Indian market keeping inline with the current trend of dewdrop notch trend in the smartphone industry. The phone will be featuring tiny dewdrop screen and glossy Back panel with multiple colour options.

The company has revealed that the Coolpad Cool 3 will be the first phone with a water drop display and with Android 9 Pie. The phone will be priced under Rs 6,000, the company has claimed.

Coolpad’s last devices in India were the Coolpad Mega 5, Mega 5M, Mega 5C for a starting price of Rs 3,999. All the phones are available exclusively through offline multi-brand outlets across India.

Coolpad Mega 5M comes with a 5-inch HD display. The device is powered by a quad-core processor clocked at 1.2 GHz and is paired with 1GB of RAM and 16GB of internal memory which is expandable to up to 32GB. The device equips a 5MP camera at the rear end for primary imaging and 2 MP snapper on the front.It has 2000mAh battery and runs on an unspecified version of Android.

Coolpad Mega 5C features a 5.45-inch Full Vision HD+ display with face unlock and Android Oreo. The device is powered by a 1.3 GHz quad-core processor with 1GB RAM and 16GB internal storage. It comes with a 5MP camera on the front and a 2,500mAh battery. The phone features the 5MP rear camera.

Coolpad Mega 5 packs in a 5.7-inch Full Vision HD+ display with an aspect ratio of 18:9. It is powered by a MediaTek MT6739 quad-core processor with 3GB of RAM and 32GB of onboard storage. There’s a dual camera setup at the back which consists of a 13-megapixel sensor and a 0.3-megapixel lens. It has a front facing 5MP camera. The device is fuelled by a 3,00mAh battery and runs on Android 8.1 Oreo.