Xiaomi has confirmed the Redmi 10 will come with dual speakers, 50-megapixel quad cameras, and a 90Hz display. 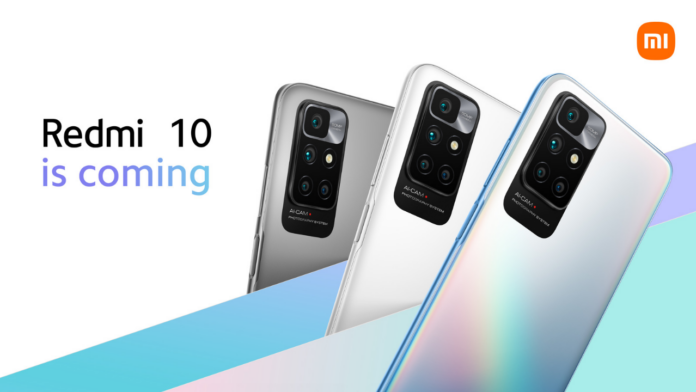 Redmi 10 has now been confirmed to launch in at least three colour options. The confirmation comes officially from Xiaomi India who has also confirmed that the device will have a 50-megapixel primary camera along with three other sensors.

Xiaomi took to Twitter to make the announcement that “Redmi 10 is coming”. In the teaser, the design of the device has been revealed from the back. The camera module clearly states the device has a 50-megapixel which is a first for the Redmi series smartphones.

Furthermore, Xiaomi has confirmed the device has a 6.5-inch FHD+ 90Hz DotdDsplay and dual speakers as well. There will be a side-mounted fingerprint sensor as well for security. The device was recently leaked through an official blog post as well. It revealed that the Redmi 10 will launch in 4GB + 64GB, 4GB + 128GB, and 6GB + 128GB variants.

The Redmi 10 will come with a 6.5-inch Full HD+ display with a 90Hz refresh rate and Corning Gorilla Glass 3 protection. It will be powered by MediaTek Dimensity G88 processor and Mali G52 GPU along with up to 6GB RAM and 128GB internal storage. There will be a microSD card slot for more storage.

The phone is said to pack a massive 5000mAh battery with 18W fast charging support. It will run MIUI 12 based on Android 11 OS.

When the phone will be launched, it will be available in Carbon Grey, Pebble White, and Sea Blue. Other connectivity features available on the device include dual SIM, Wi-Fi 802.11ac, Bluetooth 5.0, GPS, and a 3.5mm audio jack. The phone measures 162 x 75.3 x 8.95.