Research In Motion (RIM) has now come out with a new version of its BlackBerry App World application. Although currently in the beta Phase, the BlackBerry App World 3.0 comes with a different look than its predecessor and brings some improvisations to impress its users.

With the new application, BlackBerry has tried to keep it as simple as possible. The interface of the new app has been made touch friendly with bigger icons and gesture based controls. A search bar has been included right on top of the application with a new and refined search engine. Users can simply search the application based on the name, developer and even the price. 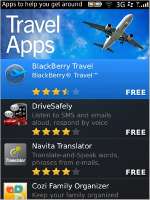 Besides, the newer application also gets grouping of the similar apps in the form of tabs like games, application, and themes. Also featuring on the home page is an app banner that suggests applications to the users on the basis of popularity and users can also see 25 top apps in each category. Also the developers promise weekly updation of the application catalogue.

The BlackBerry App World 3.0 also provides more details to each app along with the screen shots and user rating, all in one screen. There are more improvements promised by the developers on all fronts of this application including payment gateway and additional search functionalities.