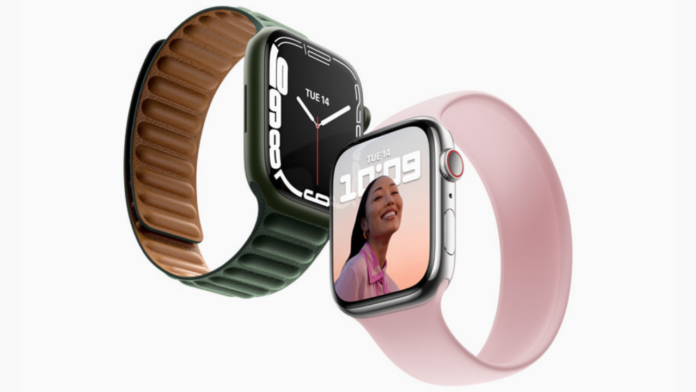 Apple, along with the new iPads and iPhones, today announced Watch Series 7. The Watch features a re-engineered Always-On Retina display with more screen area and thinner bezels as well. In addition, the design of Watch Series 7 has been updated with softer and more rounded corners.

All Apple Watch Series 7 models will be available later this year. However, this means that pricing and availability for India are yet to be announced.

Apple Watch Series 7 is available in 41mm and 45mm sizes. The Watch Series 7 gets an all-day 18-hour battery life, now complemented by 33 percent faster charging. It is the first Apple Watch to have an IP6X certification for dust resistance and maintain a WR50 water resistance rating. In addition, the Watch is compatible gets an electrical heart sensor and ECG app and a Blood Oxygen sensor and app.

The display of Watch Series 7 offers nearly 20 percent more screen area. In addition, it has thinner borders at 1.7 mm, which is 40 percent smaller than those on Watch Series 6. Moreover, while the wrist is down, the Always-On Retina display is up to 70 percent brighter indoors than that of the Apple Watch Series 6.

Apple Watch Series 7 offers two additional larger font sizes and a new QWERTY keyboard that can be tapped or swiped with QuickPath. With watchOS 8, larger menu titles and buttons in apps like Stopwatch, Activity, and Alarms make the screen even simpler to interact with, says Apple. watchOS 8 will be available for Apple Watch Series 3 and later on Monday, September 20, and requires iPhone 6s or later with iOS 15 or later.