Android Nougat rolled out for Samsung Galaxy J7 (2016) in India

After rolling out Android Nougat update in Russia last month, Samsung has now rolled out the Nougat 7.0 update for its Galaxy J7 (2016) smartphone in India, as per a report of SamMobile. Samsung Galaxy J7 (2016) was launched in India last year in 2016 with Android 6.0 Marshmallow operating system. The smartphone comes in three different colours – White, Black and Gold.

The software firmware version for this update is J710FXXU3BQHC for the Samsung Galaxy J7 (2016) Do keep in mind that before you go for the downloading the update, check that battery of your smartphone. It should have at least 50% charge and 2GB of free space is available. Since the update is being rolled out over-the-air, it may take some time before it comes to your device. One can also manually check for the update by going to Settings ->About Phone -> Software Update. 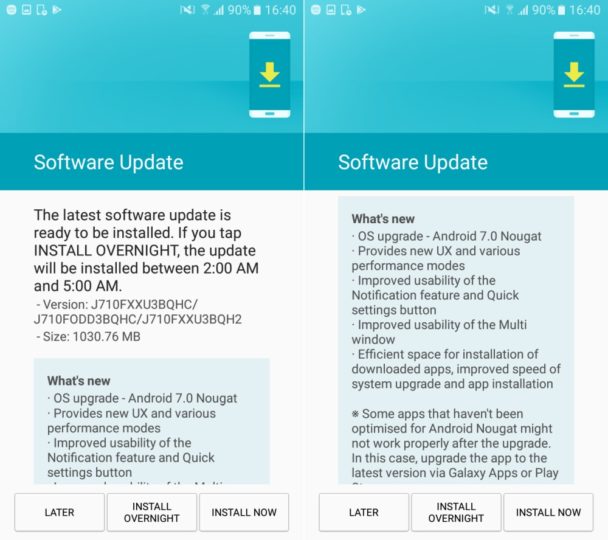 To brief out the specifications, the Samsung Galaxy J7 (2016) comes with a 5.5-inch full-HD (1080 x 1920 pixels) AMOLED display. It is powered by 1.6 GHz octa-core processor with 3GB of RAM, 16GB of internal storage which can be further expanded to 128GB via a micro SD card. The device now runs on Android 7.0 Nougat operating system and packs in a 3,300 mAh battery.