Benchmarks hint that the next major Android 5.0 dubbed as Key Lime Pie is being tested on Sony LT30i smartphone.

The next version of Android operating system, Android 5.0 aka Key Lime Pie, seems to have been ready as the TechKiddy reported to have spotted the same on the Sony Mobile LT30i at the Nenamark Benchmark listing.

Nenamark Benchmarking suite listing hints that Sony LT30i running Android 5.0 was being tested recently and results were submitted. The benchmark does seem interesting but what does confuse is the graphics chip – Adreno 220. 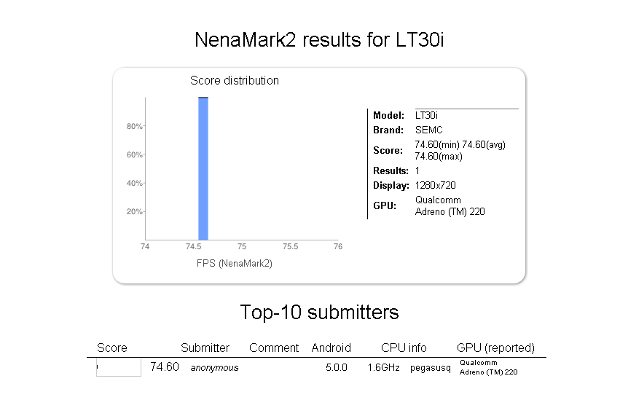 That in a way indicates that the Android 5.0 Key Lime Pie will be compatible with the phones released in early 2011 and late 2010 – most importantly carrying that typical hardware such as S3 family of processors. Of course, this is just an estimate based on Google’s Android Software update program that will support a smartphone for 18 months after its availability in the market.

The Android 5.0 Key Lime Pie can be expected to be announced by the mid of next year at the Google I/O Conference.