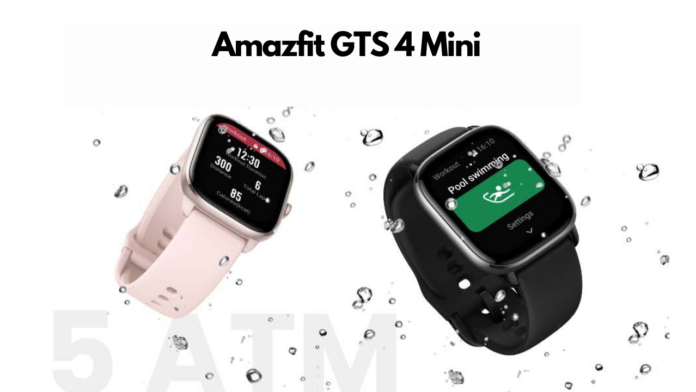 Amazfit is on a launch spree in India and it is soon going to launch a new smartwatch in the country which will be the GTS 4 Mini. The company has not revealed as to when exactly the smartwatch is launching but what it has confirmed are specifications and the features of the smartwatch.

Amazfit has created a dedicated Amazon microsite which confirms the design and specifications of the watch. The Amazfit GTS 4 Mini will sport a 1.65-inch AMOLED display with an HD resolution. It is water-resistant up to 50 metres as its 5ATM rated and it will be available in four colours including Blue, Pink, White and Black.

Further, the will be equipped with a 24-hour heart rate monitor, SpO2 sensor, and a stress tracker. It is capable of monitoring sleep patterns and breathing quality at night. The watch will have support for tracking over 120 sports modes along with automatic recognition for a few of them. The wearable device will also pack a menstrual cycle tracker and PAI health assessment system.

Next, the GTS 4 Mini is confirmed to be equipped with a built-in GPS and features such as sedentary reminders, to-do lists, weather updates, social media notifications, and more. As mentioned, the launch date as well as the pricing for the GTS 4 Mini will be available soon.

The brand recently also launched the T-Rex 2 rugged smartwatch in India at Rs 15,999. The watch weighs 66.5g including the strap and it comes with 15 military certifications. The company says that the watch can be used in extremely cold weather with ambient temperatures as low as -30°C. In addition, it is also built with up to a 100-meter water resistance level, five-star dual-frequency precise positioning, trajectory & navigation, and other features.