Amazfit Falcon is the latest rugged smartwatch to arrive in India with 20ATM water resistance, 150 sports modes and more. 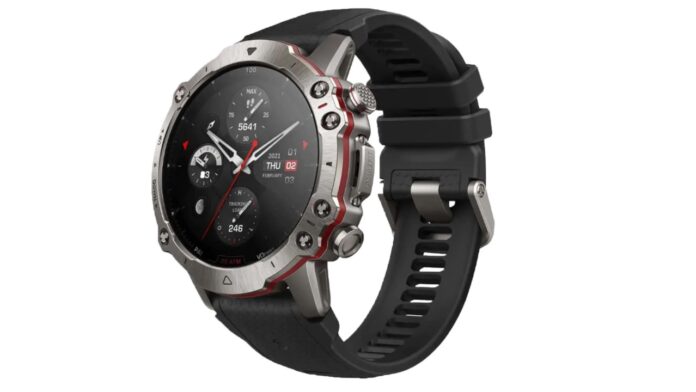 Amazfit has launched a new smartwatch in India that actually costs more than a number of smartphones in India. The new rugged smartwatch from Amazfit is called Falcon and it has military-grade certification. It has passed the 15 military-grade tests to bag the MIL-STD 810G certification. Moreover, the Falcon is water-resistant up to 200 meters – a first for Amazfit smartwatches.

The Amazfit Falcon is priced at Rs 44,999 in India. It comes in a single Supersonic Black colour and will be sold through Amazfit’s official Indian website starting December 3, with pre-orders beginning on December 1. Those who pre-book the Falcon will get an Amazfit Multi-Functional Duffle/Sports Bag worth Rs 1,999 for free.

The Amazfit Falcon is a premium, rugged smartwatch with an aircraft-grade TC4 titanium unibody design. It runs on Zepp OS, the company’s own operating system for smartwatches. It sports a 1.28″ always-on AMOLED touchscreen with 416×416 pixels resolution. The display is covered with a Sapphire Crystal Glass having a Mohs hardness rating of 9/10.

Next, it supports over 150 indoor and outdoor sports modes and has automatic recognition for eight of them, such as pool swimming. Amazfit has provided the ability to connect the Falcon to professional workout devices like heart rate belts and cycling power meters via Bluetooth.

The smartwatch can also sync data with third-party fitness apps, including Google Fit, Apple Health, Relive, Strava, and Adidas’ Running app. Falcon is backed by a battery with a rated capacity of 500 mAh that is claimed to offer up to two weeks of runtime in a typical usage scenario. The watch takes two hours to charge with the bundled 5-pin plug charger.

The Falcon supports 2.4GHz Wi-Fi and Bluetooth 5.0 BLE connectivity and works with Android (7.0 and above) and iOS (12.0 and above) devices. Lastly, the watch has passed the 15 military-grade tests to get the MIL-STD 810G certification, alongside 20ATM (up to 200 meters) water resistance.