The sensors for face recognition, an earpiece speaker, a possible ambient light sensor along with a front-facing camera in the notch at the top have also been revealed by the images

Chinese company Xiaomi announced the bezel-less flagship Xiaomi Mi Mix 2 smartphone in September this year in China and later launched it in India last month for Rs 35,999. Now, it seems like Xiaomi is working on its next bezel-less design smartphone which is dubbed as Xiaomi Mi Mix 2s. A few alleged pictures of the Xiaomi Mi Mix 2s smartphone has surfaced online which the device sports an iPhone X like notch at the top. The alleged phone looks like a modified version of the Mi Mix 2.

The images have been leaked on Chines microblogging website, Weibo and were first spotted by GSMArena. As per reports, the Xiaomi Mi Mix 2s can be expected as an upgrade to its recently launched Xiaomi Mi Mix. The leaked images show a notch at the top of the handset which is like the notch on the latest iPhone X.

The bezel-less display has also been revealed by the leaked images. The slim bottom bezel of the phone is visible in one of the renders of the alleged Mi MIX 2s. Apart from that, the sensors for face recognition, an earpiece speaker, a possible ambient light sensor along with a front-facing camera in the notch at the top have also been revealed by the images. On the right side of the notch, the display shows the battery status and network strength while on the left we can expect the notification icons. 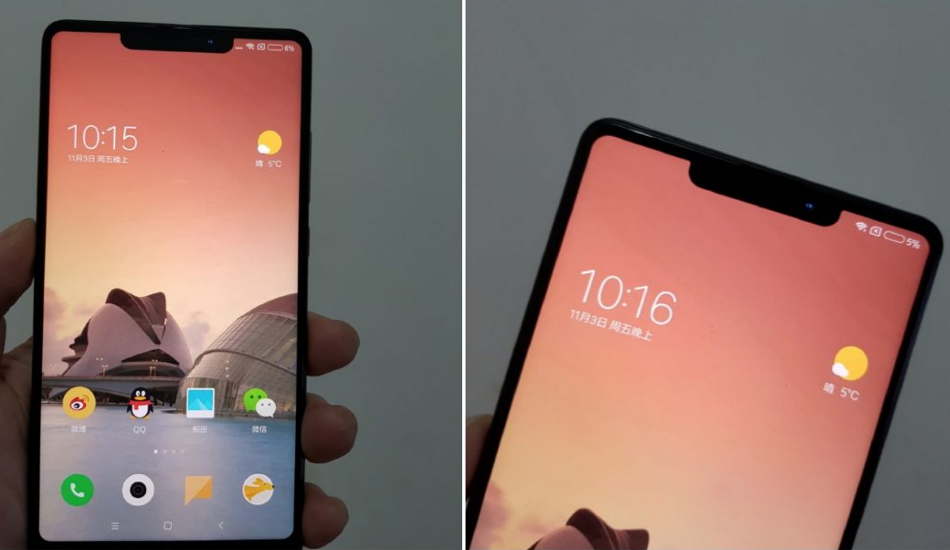 Sadly, no details about the Xiaomi Mi Mix 2s is known at the moment. We advise our readers to take this information with a pinch of salt as the authenticity of these images cannot be guaranteed as they come from an unconfirmed source. Also, the company has not officially announced any details for the Xiaomi Mi Mix 2s smartphone.

To recap, the Xiaomi Mi Mix 2 comes features a metal chassis with the ceramic rear body and comes with a 5.99-inch (2160 x 1080) Super AMOLED with an 18:9 full-screen display and a bezel-less display. It is powered by 2.45 GHz octa-core Snapdragon 835 64-bit processor coupled with 6GB RAM and 128 internal storage along with Adreno 540 GPU. The dual-SIM smartphone runs on Android 7.1 Nougat operating with MIUI 9 and has a non-removable 3400 mAh battery with Quick Charge 3.0 technology.

It offers a 12-megapixel autofocus rear camera with dual-tone LED flash, Sony IMX386 sensor, 4-axis OIS, f/2.0 aperture, 5P lens, PDAF, HDR. On the right of the lens is a dual LED flash and below it is a fingerprint scanner. For the front, there is a 5-megapixel camera that supports face recognition and also has autofocus. On the connectivity front, the device offers 4G with VoLTE, Bluetooth 5.0, WiFi (802.11 b/g/n), GPS with AGS/GLONASS and USB Type C. Unfortunately the device lacks 3.5mm headphone jack but instead, the device will be shipped with a USB Type-C dongle. The handset measures 151.8 x 75.5 x 7.7mm, and weighs 185 grams.