Sony has recently entered into the lucrative tablet segment with two new models – Tablet S and Tablet P. These Sony tablets were previously codenamed as Tablet S1 and Tablet S2 respectively. Sony is amongst the forerunners who incorporated a dual-core Nvidia Tegra 2 mobile processor in the tablet products.
Amongst the existing breed of new tablets that run Android 3.0 Honeycomb operating system, Sony Tablet S does seem like a late entrant at a face-value. But in mean time, Sony has added several amazing features to really make the consumers think whether the tablet is really worth the wait or not. 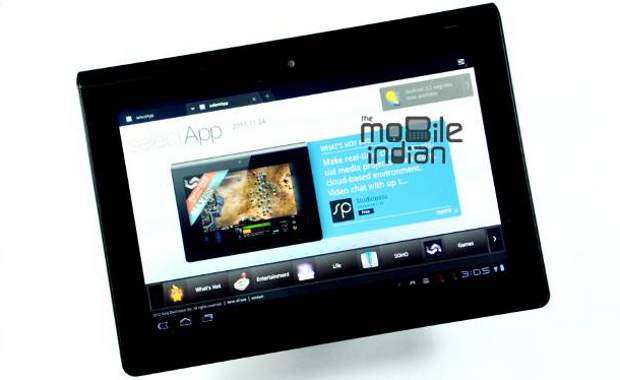 The Sony Tablet S arrives in India with couple of novel features such as the PlayStation Certification, Universal Remote and Sony Reader app. Most important is the unique wrap design that makes the Tablet S stand out amongst all other slim or sturdy tablets with slate design. For India, Sony has introduced both WiFi and WiFi+3G models.
###PAGE###
Design and Build:
Though late, Sony always enters a new segment with a unique product design. Sony has taken a unique wrap design approach with Tablet S and it appears like an open magazine with one side-folded. The display has been constructed using Sony TruBlack technology which offers reduced reflection, slightly better contrast ratios and greater HD video quality result. 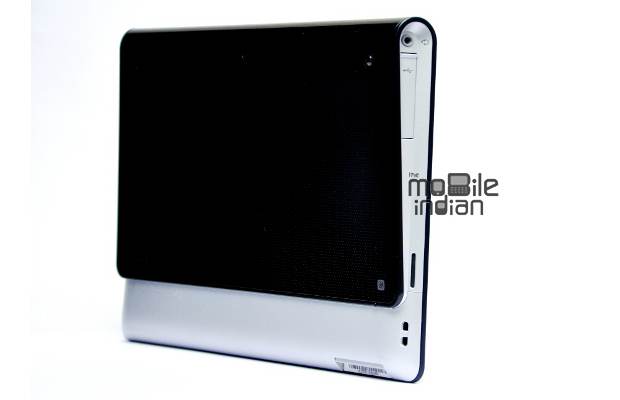 Sony Tablet S has been constructed with twin colours. The metallic black part which forms the wrapped design starts from top of the display and extends to the bottom on the back side. Everything else under that part is brushed with silver color.
Sony Tablet S weighs 625 grams which is bit heavier than the Samsung Galaxy Tab 750 (Galaxy Tab 10.1) that weighs just 560 grams. The tablet indeed feels bit heavy while holding it in landscape mode while in the portrait mode, the thicker part of the tablet needs to be held and the fingers get some grip of raised spots at the back.

Built using the polycarbonate material, the three sides of the tablet are thin and quite edgy instead of rounded. Only the top side of the tablet with wrapped style design was blunt and totally harmless. The feel of Tablet S is similar to every other Sony product that involves polycarbonate usage and is prone to fingerprints.

###PAGE###
Display and Hardware:
The tablet has a 9.4-inch touchscreen LCD display which has been built using Sony TruBlack technology that promises better reproduction of high quality images and videos. The Sony’s TruBlack technology incorporates usage of a special anti-reflective film and thereby makes tablet display less reflective.
Sony Tablet S display bears (WXGA) 1280×800 pixel resolution with 16:10 aspect ratio that is same as found in the most 10.1-inch display bearing tablets. The brightness setting of this display was quite a surprise for the lowest setting would make the content non-visible but the highest setting doesn’t seem too bright. 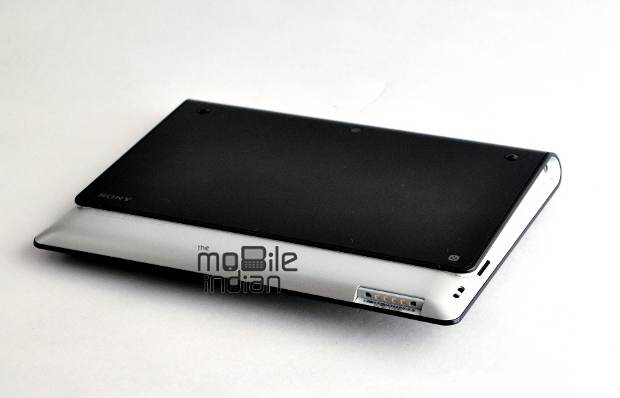 Innards of the Tablet S comprises of a dual-core 1 GHz Nvidia Tegra 2 mobile processor and low power GeForce series graphics chip. At times the tablet did appear bit slower while opening some apps (especially games) and even during closing them. This tablet has 1 GB memory which, along with the Honeycomb operating system, ensures a smoother user experience. As per the specification, the tablet comes with 16 GB on-board storage but out of that only 9 GB is user accessible storage and rest is meant for system storage as well as for the operating system.
There’s a 5-megapixel camera in the rear center of the tablet which comes without any LED Flash. This camera is powered by Exmor R for Mobile image sensor for HD quality images and also record video in 1280×720 pixel resolution. The front facing camera is mere 0.3 megapixels and would serve good enough for video chats.
The volume control buttons lie on the right side just under the power buttons. There’s also a Reset hole just under the volume control buttons to reset the tablet to the factory settings. On the left side of the tablet lies the 3.5mm audio port to hook in earphones. Under is the flap cover that guards the micro USB Port and the SD card slot.
Sony has not offered any micro HDMI port on the tablet but instead provided DLNA support to let the user share content with DLNA certified Sony products – laptop, speakers and Bravia HD TVs. Along with providing a micro USB port, Sony has also offer the USB Host support, so only if you manage to get a third party convertor then you can make the tablet access and read files from a Flash drive or even attach a mouse to it.
Finger-print prone Sony Tablet S is ergonomically comforting almost but limits with its bit sharper edges. Slight elevation achieved due to the wrap design makes it wee bit comfortable while using the onscreen keyboard.
Sony has the prowess to offer products with great industrial design and potential. The Tablet S just proves it from the hardware point of view.

###PAGE###
Software Performance and Apps:
Sony Tablet S comes preloaded with Android 3.2 Honeycomb update and new updates are received over the air once connected to a WiFi network. Sony has not tried to revamp the home screen user interface of the Android 3.2 Honeycomb but just made it smoother. Swipe transitions between the home screens are swifter and snappier.
Basic home screen of the tablet has couple of custom icons that link to native applications. For instance, the top of the screen has shortcuts for the browser, email, WiFi connection and Reader app along with a Launcher button in the corner. The moment you tap on the app Launcher button, you will enter in to a totally different App Drawer. 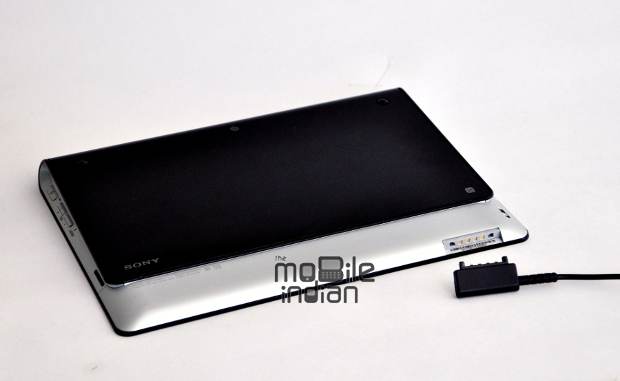 Tablet S has the VAIO software like styling with white background and the square icons have silver lining borders. There’s a streak of silver lining that flows diagonally from left to right – basically a shining effect for eye candy.
The Tablet S has been PlayStation Certified which means most PlayStation games developed using the PlayStation Suite for the Android Platform. The Android Market will offer specific PlayStation Certified games along with the apps for the Tablet S.
Crash Bandicoot and Pinball Heroes games come preloaded and open up in full screen. Casual gaming lovers would totally enjoy the interface that offers a regular direction pad on the left side and the action buttons on the right side of in the screen. Also the position of those optical button sets is customisable as per your comfort. With the built-in 3-axis accelerometer and gyroscopic sensor, the gaming is fun with the tablet.
Sony India us offering five exclusive apps designed and bundled with Tablet S that includes Video Chaska, Star Player, Big Flix, Bollywood Hungama and Meragaana. These apps offer India specific content such as videos, Music, wallpapers, and even movies on demand service. Even the Universal Remote was good to use with the IR Port if distance between the tablet and the TV was not blocked by anything.
Avid e-Book readers will simply love the Reader app specifically designed and customised for the Tablet S. It offers several free to read classics. Don’t get confused with the Reader and Social Feed Reader. The latter offers an all in one place view of the updates from user’s different social network accounts. The only pitfall visible was dearth of good Honeycomb specific applications to try out.

###PAGE###
Multimedia and Camera:
Watching movies on the tablet is mostly the intention of several users. However, users might be bit bugged with the lack of support multiple video formats with the tablet. Though the Android 3.2 Honeycomb has been here for almost a year but there are no tablet optimised video players that will support several video formats out of the box. Best bet is to transfer .mp4 files and be happy with the video output. By default the tablet supports .mp4, h.264 and and h.263 video format. 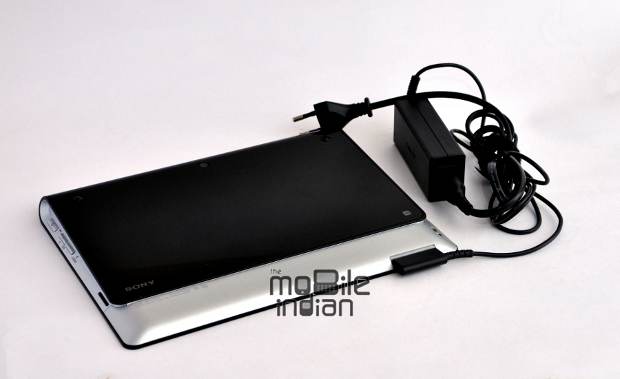 Sony has strategically placed the speakers on the side of the tablet and used its proprietary audio technology – xLOUD Volume Enhancement Engine. The xLOUD engine basically boosts the music while playing through the tablet’s speaker or while listening through a pair of earphones. Music listening and movie watching experience was fairly pleasant. In fact the TruBlack display does serve nice while watching videos in dark with vivid colors and good contrast.
The Tablet S features a 5-megapixel camera with Exmor R image sensor that does offer decent quality images. However, the photos when zoomed to actual quality bit of noise creeps in the details. Lack of LED Flash serves as drawback while clicking images in low luminance areas. The 720p HD video recording is great feature and also little comfortable thanks to the tablet’s ergonomics.

Battery life:
Sony loves to have at least one unique (read: proprietary) feature in its every new product. With the Tablet S, it is the charger and the charging port. It takes about five hours to charge the tablet completely using the proprietary charger which is bit heavy. Thankfully one can always charge the tablet via the micro USB port but that takes way longer than a properly wall-mount power source.
With a normal usage – involving watching movies for 1 hour 45 minutes, listening to music for roughly 25 minutes and light browsing – the battery lasted for about 9 hours. To be noted here that the WiFi was turned on only when required which apparently boosted the battery life a bit. But at this point, I preferred keeping brightness low. But with high brightness and constant connectivity to WiFi, the tablet lasted barely six hours. So if you are going to use this tablet exhaustively, you may have to keep it connected to the power source.

###PAGE###
Conclusion:
Undoubtedly Sony wins and takes away all the brownies with the fresh and different industrial design made Tablet S. With smart usage of textures at back and glossy screen, the Tablet practically evens it out. Sony Tablet S 16 GB (WiFi) is available in India at a retail price of Rs 29,990 and is ideal for the Sony product lovers who already have Sony product eco-system at home. Even for those who love PlayStation Games and love good quality multi-media in a tablet with a different design can opt for this tablet. 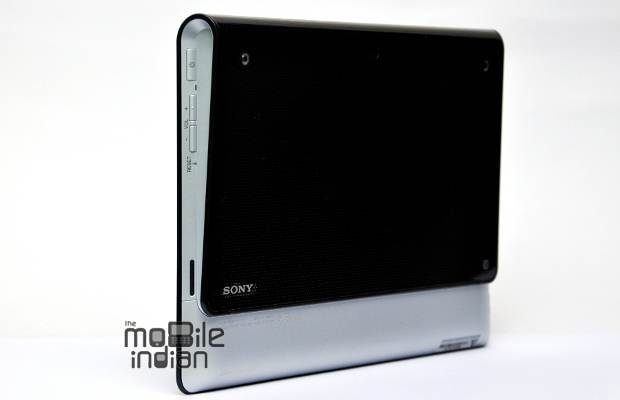 Sony will really have to offer the Android 4.0 Ice Cream Sandwich update to the users of this tablet. The consumers would be lured to buy this tablet only after that update arrives and several other compatible PlayStation certified games as well as apps.
Test unit sourced from Perfect Relations.