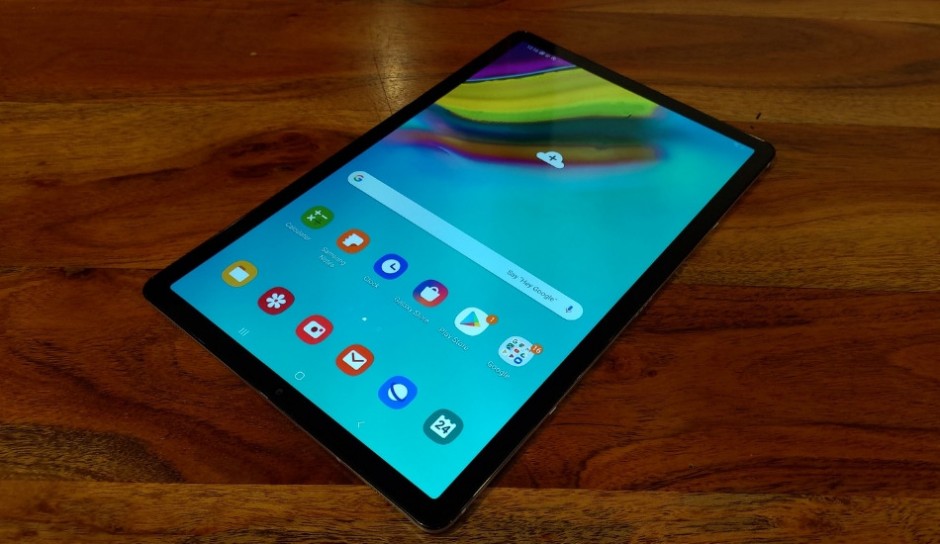 Samsung has today announced the launch of its latest tablet in the market with the launch of Galaxy Tab S5e in India. The tablet comes with a price tag of Rs 35,999 for the WiFi model, while the WiFi + LTE variant is priced at Rs 39,999. The tablet will be available for sale on Amazon for the WiFi variant and on Flipkart for WiFi + LTE version along with key retail stores and Samsung online store.

With this, Samsung is gearing to strengthen its position in the stagnant tablet market. The company has added a slew of exciting features and the key highlights are quad speakers along with in-built support for Samsung DeX. This coupled some decent hardware and design language, the Galaxy Tab S5e is meant to make a long-lasting impression. We spent some time with the device and here are our first impressions.

Samsung Galaxy Tab S5e is, without any doubt, one of the slimmest and lightest tablets we have seen in the market. The tablet is just 5.5mm thin and weighs 400 grams, which makes it extremely lightweight, even lighter than some smartphones. It has a metallic body, which gives a premium look and adds some durability as compared to the Galaxy Tab S4. The front sports a large 10.5 screen with minimal bezels around the corner. 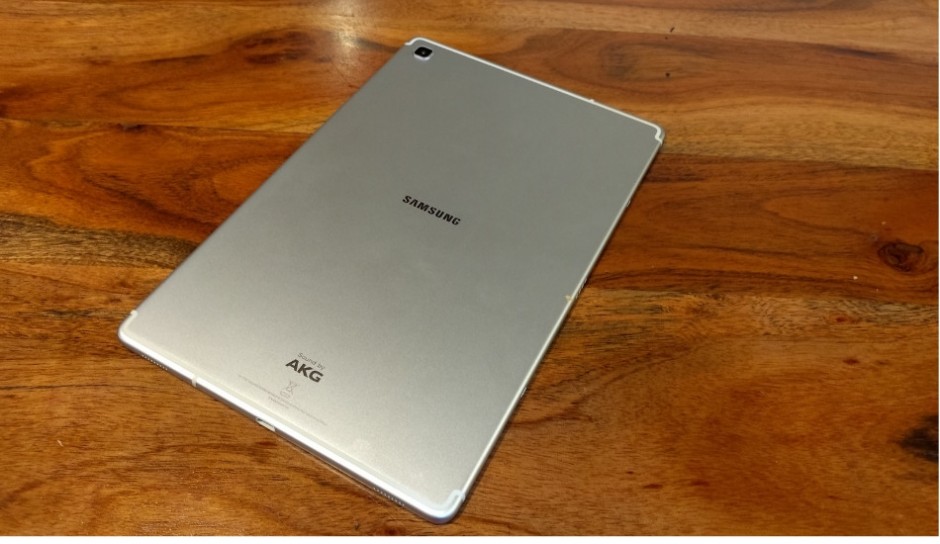 Quickly giving brief about key placement, the right side of the device features power on/off button along with volume controls and a microSD card slot. The left houses Pogo connector, which is used to pair it with Samsung Pogo keyboard. The base comes with USB Type-C port flanked between two speaker grilles, while the top also features two speakers. The back panel is loaded a single rear camera and Samsung branding. That said, the Samsung Galaxy Tab S5e features a premium design language, which is quite impressive in nature and the slim profile along with lightweight body makes it comfortable to hold in hand or carry it around your backpack.

Coming to the display, the Samsung Galaxy Tab S5e is equipped with a 10.5-inch WQXGA Super AMOLED display with a screen resolution of 2560 x 1600 pixels, 16:10 aspect ratio and 288 ppi pixel density. The display is quite vibrant and the colours look vivid. The viewing angles are quite decent and it comes with Wideline L1 support, meaning that you can stream HD content on Netflix and Amazon Prime Videos. We will talk more about this in our upcoming review.

On the hardware front, the Samsung Galaxy Tab S5e is powered by a Qualcomm Snapdragon 670 processor along with 4GB of RAM and 64GB of internal storage, which can be further expanded up to 512GB via microSD card slot. The company has used a mid-range chipset for this tablet. It would be interesting to see whether it will work smoothly or not. 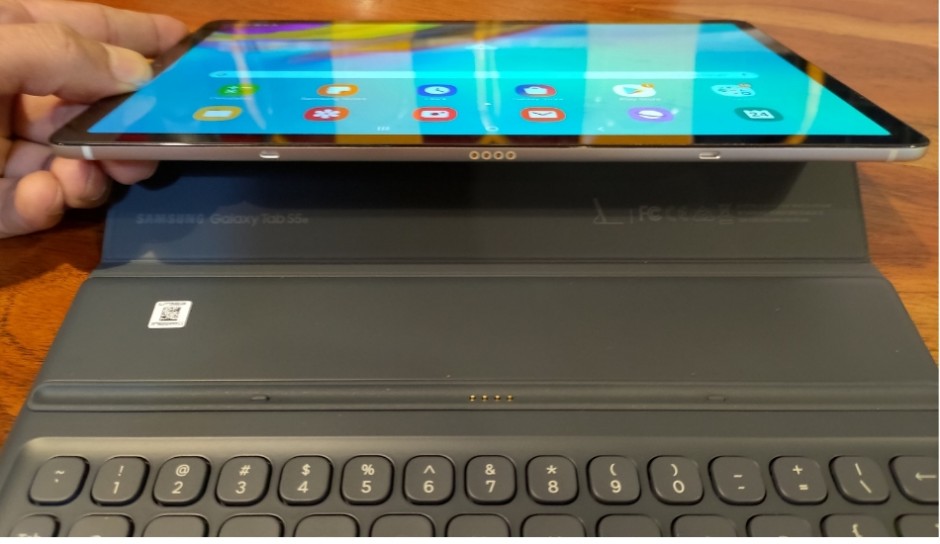 On the software front, the Samsung Galaxy Tab S5e is loaded with OneUI, which is based on Android 9.0 Pie. The tablet offers almost the same user experience as you will notice in a Samsung smartphone. However, the company has optimised it so that the apps work perfectly with the tablet. Interesting thing here is the inclusion of Samsung DeX support. For the unintended, DeX allows users to use their Samsung smartphone or tablet as a PC. The brand has optimised multiple apps with DeX. The new tablet can be connected to Samsung Pogo keyboard and one can also connect any universal Bluetooth mouse and use it as a 2-in-1 device. The built-in DeX works pretty smoothly in our initial testing and we will discuss in details in our upcoming review.

On the camera front, the Samsung Galaxy Tab S5e is backed by a 13-megapixel rear sensor, while for the front, there is a 5-megapixel shooter for selfies and video calling. The camera performance looks decent in our initial testing and the selfies are decent as well but don’t expect too much from the cameras. 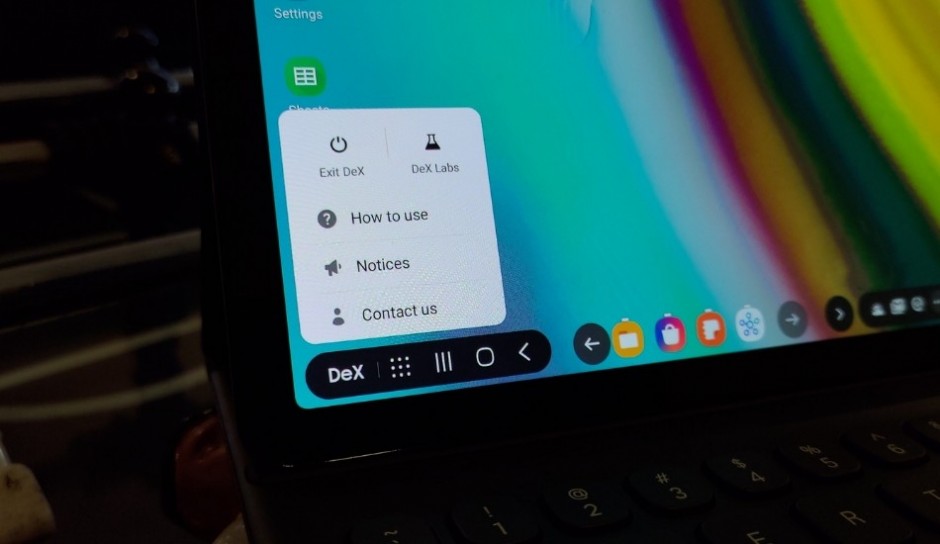 On the battery front, the company has added a 7040mAh battery and it has also bundled an 18W fast charger. The company claims that the tablet can provide a battery backup up to 13.5 hours and with the help of fast charging, it can get fully charged in 3 hours. This is a claim, which is yet to be tested out.

The Samsung Galaxy Tab S5e is surely one of the slimmest tablets available in the market at present. The premium design coupled with AMOLED display and quad speakers will provide an immersive viewing experience. The performance seems to be just fine and Samsung DeX looks promising. Stay tuned with us for the detailed review of the Samsung Galaxy Tab S5e.