Be it design or hardware or the software, the Samsung Galaxy Tab S 10.5 (LTE) has everything desired.

Camera could have been better

Samsung has a tremendous growth story when it comes to the tablet market, no doubt thus its tablets are much in demand. One big reason behind Samsung’s success is its strategy to bring tablets in various price brackets, starting from as low as Rs 10,000. It has tablets of various screen sizes – 7 inch, 8 inch, 10 inch, and even 12 inch. It has launched tablets in Note series, Tab 4 series, Tab 3, and now in S series. 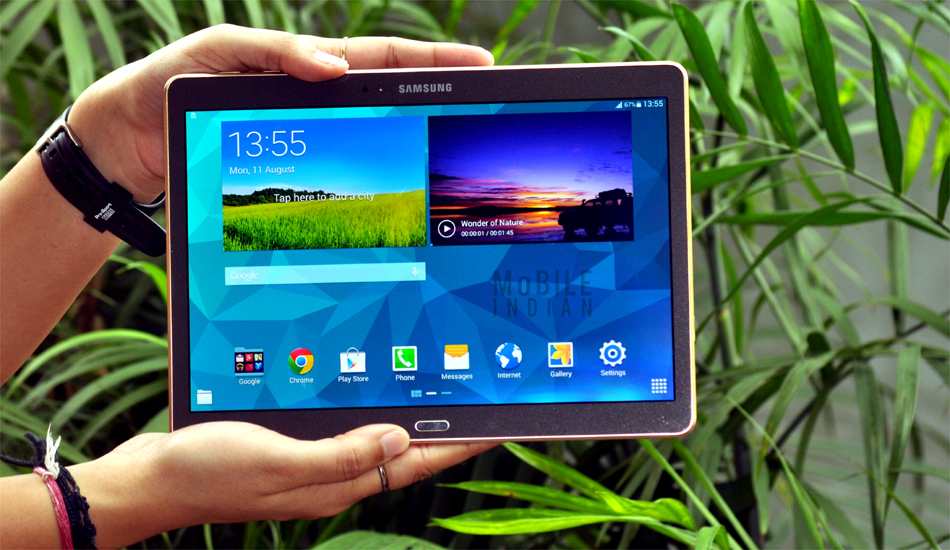 In the S series, Samsung has launched a tablet with 10.5 inch screen size and another with 8.4 inch touchscreen. I have recently got the Samsung Tab S 10.5 SM-T805 for review. Note that this is a 4G enabled tablet and comes with a huge 10.5 inch screen, octa core processor, 3 GB RAM, 16 GB ROM, 128 GB micro SD card support, 8 megapixel rear camera, 2.1 megapixel front camera etc.

We used the tablet for more than two weeks and here is our take on the Samsung Galaxy Tab S10.5.

To start with the Tab S 10.5 comes in white, black and gold colours. We have got the gold colour variant which looks good. It is extremely light. Even though it has got a 10.5 inch screen and has metallic strip around its four sides, the tablet weighs only 467 grams. Moreover, it is just 6.6 mm thick and thus doesn’t strain wrists during extended usage. The surprising fact is that it is even lighter and thinner than the 9.7 inch display bearing Apple iPad Air (16 GB).

Furthermore, the back panel of Tab S has got the same dimpled faux leather panel as the Samsung Galaxy S5. I have been an admirer of such faux leather panel for long as it feels good, does not get dirty, isn’t slippery, and looks classy too. Especially tablets which are meant for e-books and movies, such back panels come as a boon. 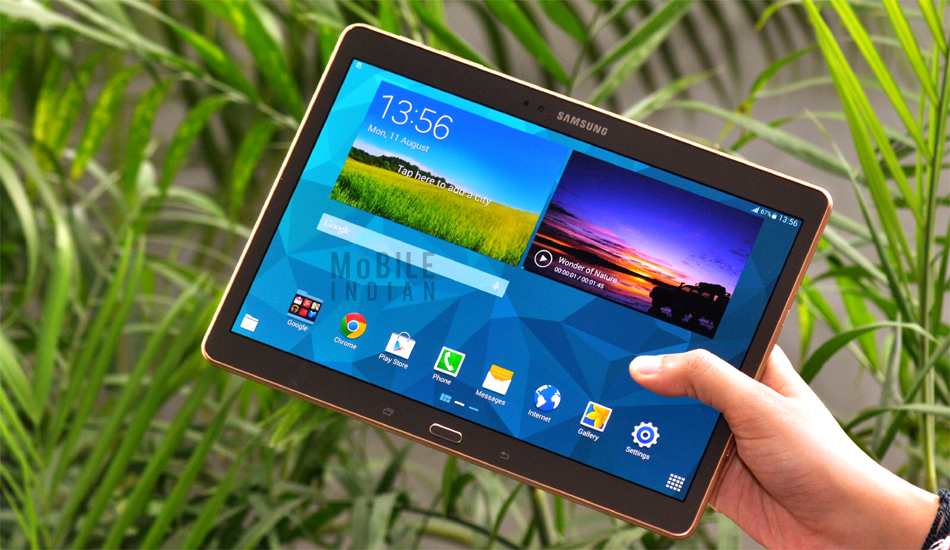 Talking about placement of ports and buttons, the Tab S too has the traditional physical home button below the display, flanked by recent and back soft touch keys on either side. The home button also acts as the fingerprint scanner. The bezel surrounding the display are just enough for comfortable holding. Above the display lies a camera and a sensor. 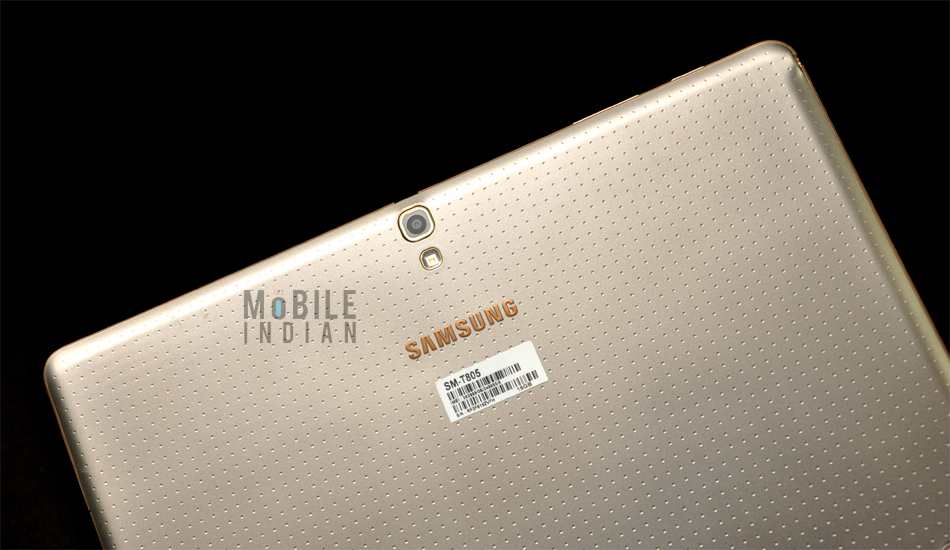 There are two grooves in the back panel which are meant for the cover but since we were not given one with the review unit we cannot comment on its benefits.

Coming back to the design aspect, the 8 megapixel camera lies at the top of the back panel (when you hold it in portrait mode), exactly in the middle. Below it lies the LED flash. The brand name, in metal pieces, is engraved into the rubbersied surface.

A metallic strip covers all its four sides, giving a sense of security. The front display part is on a lower surface than this surrounding side panel, so even if you keep the tablet on table with display down, the display would be separated from the tablet by few millimetres.

Samsung has always delivered its high end devices with superb displays. The Tab S 10.5 is no aberration either. The display comes with 2560×1600 pixels resolution thereby pushing pixels density of 287 ppi. On top of that Samsung has employed the Super Amoled technology for this display, thus enhancing the colour output and contrast. The Super Amoled technology also reduces the light reflection and thus offers a much better reading experience. 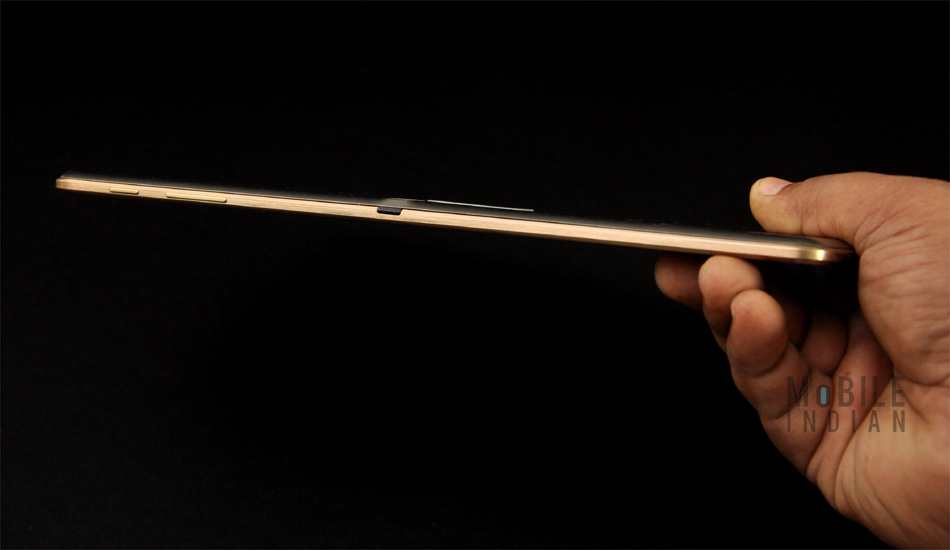 The screen has superb touch response while brightness levels are so high that you cannot even look at it indoors with maximum brightness. Even in bright outdoors, the tablet is operable with half the brightness. The Auto Mode is thus preferable which does a splendid job in adjusting the brightness according to the environment.

The Tab S comes with Android 4.4.2 KitKat operating system. Like all Samsung devices, it has the customised Samsung software known as TouchWiz. The modified UI makes the Android interface much simpler. For instance, the settings page has been divided into four segments -Connections, Device, General, and Application. 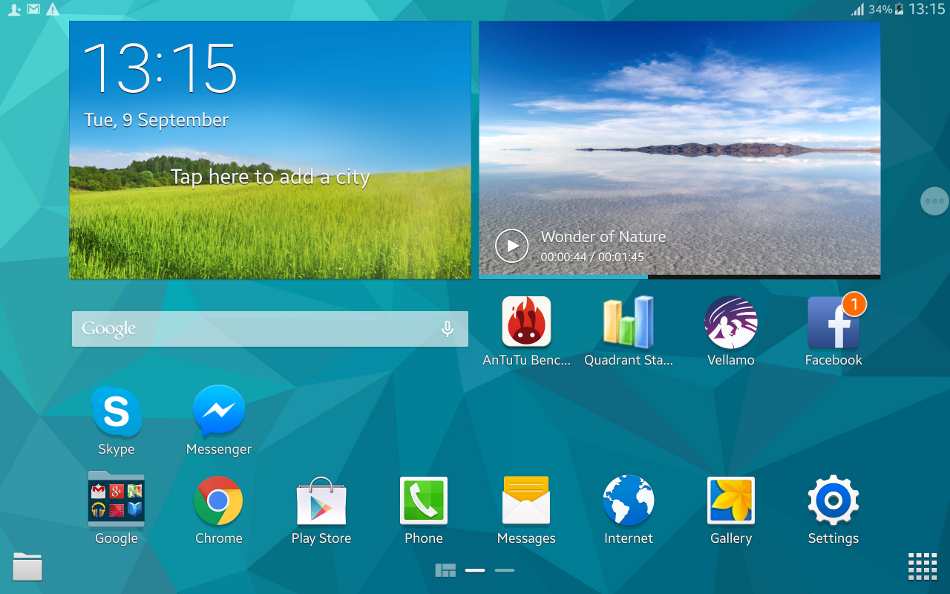 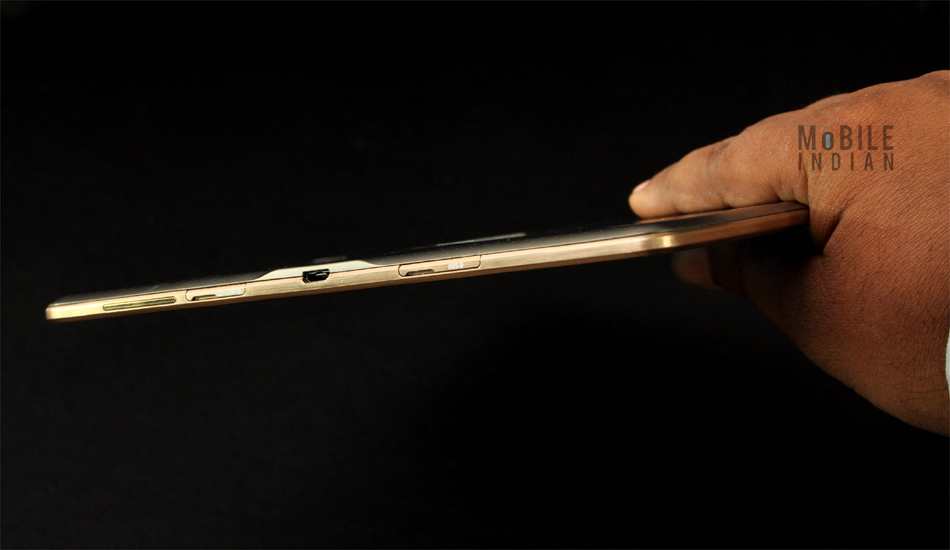 Pulling down from the top brings up the notification bar. The Multi Window feature is also there along with a new Tool Box that appears as a small circle and can be dragged to any place no matter what you are doing -watching movies, playing games etc. Both these two features allow users to quickly access other apps like camera, gallery, browser etc. 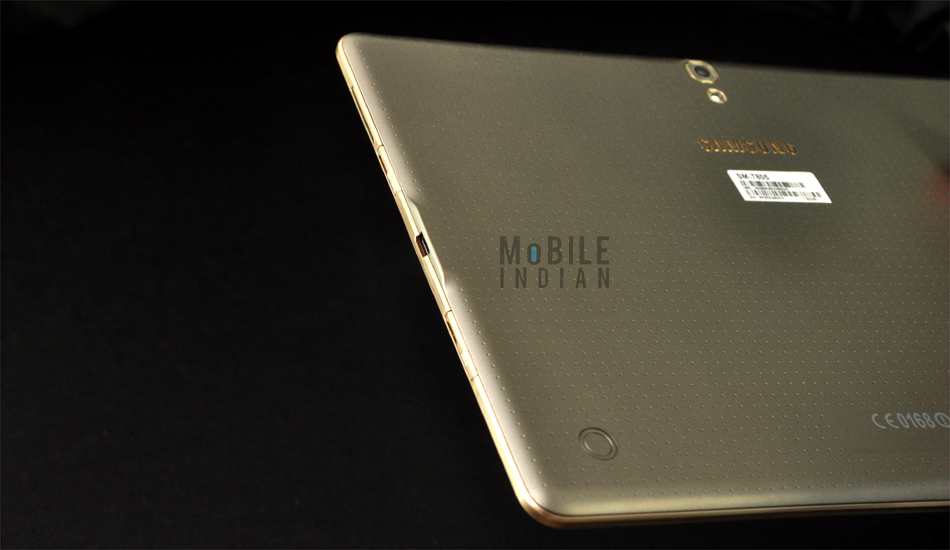 For security, it has the fingerprint scanner apart from regular Android locking systems like pattern, PIN, password etc. There is a Private Mode as well if you wish to lock certain apps from prying eyes. There is also provision to create a separate user profile or Restricted Profile if you want to share the tablet with others without compromising your privacy.

The Exynos 5 Octa 5420 octa core processor, comprising a 1.9 GHz Cortex-A15 quad core processor and a quad-core 1.3 GHz Cortex-A7 processor, powers up the Samsung Galaxy Tab 10.5. To handle the graphics, there is Mali-T628 MP6. Moreover, it has 3 GB RAM. Needless to say, the tablet managed to handle anything thrown at it – whether heavy games like Modern Combat 5 or a bunch of apps. 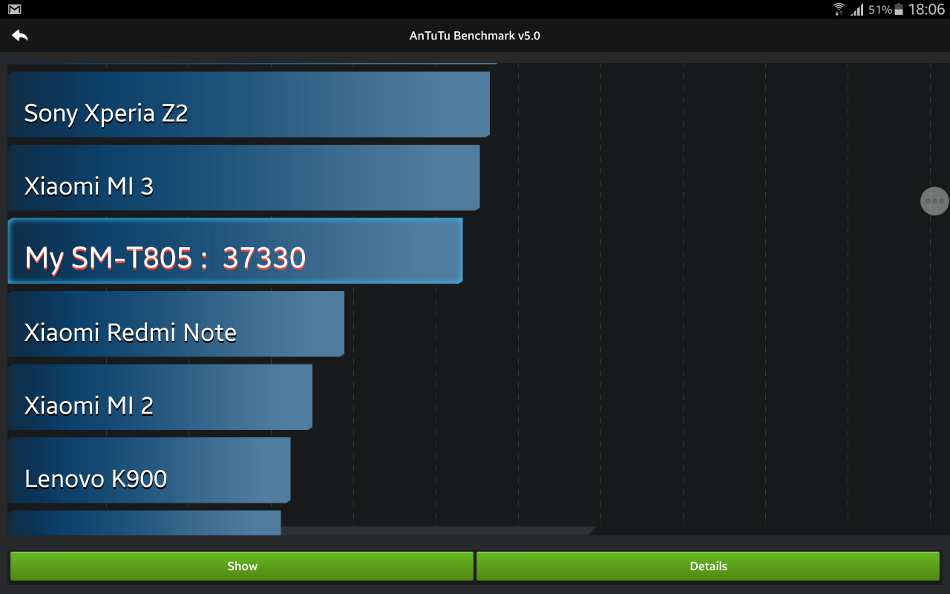 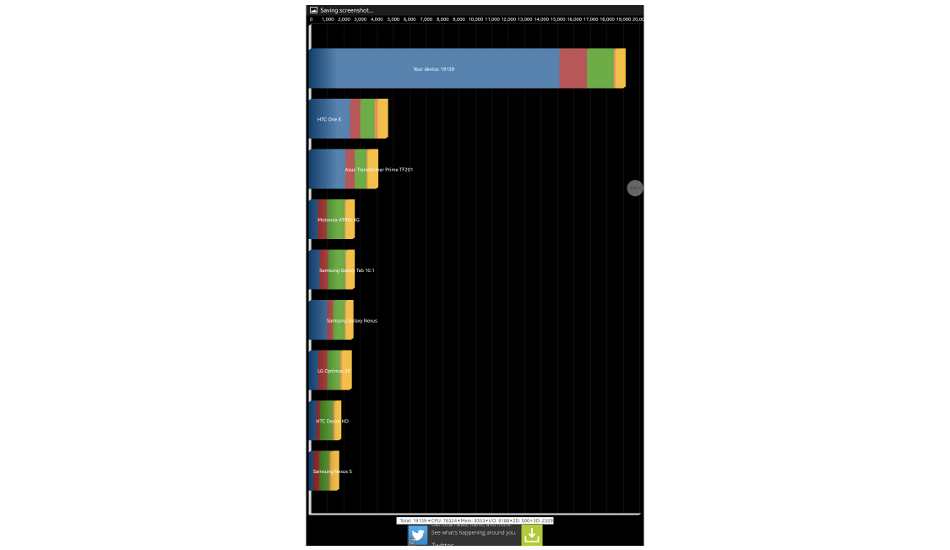 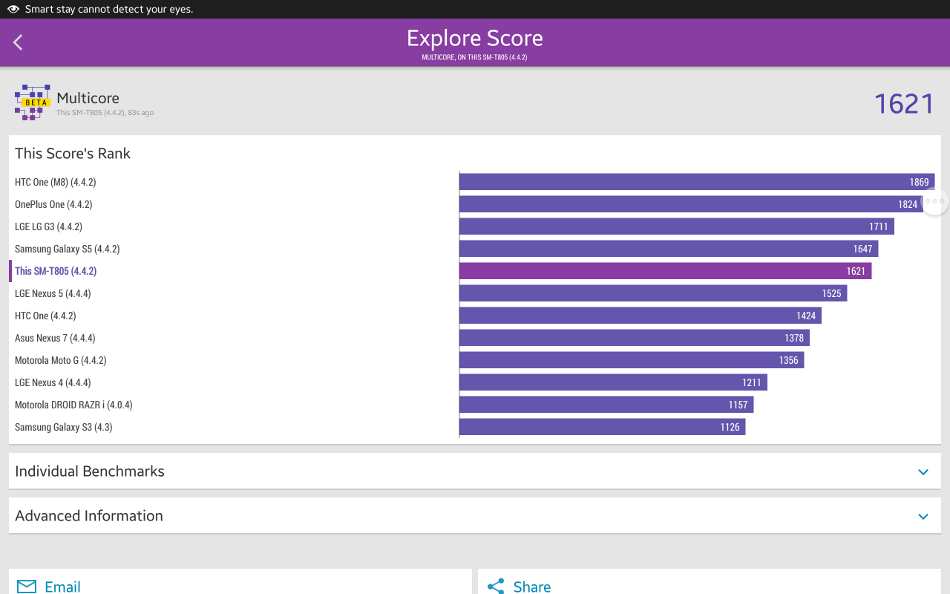 Storage wise too the tablet is second to none. It comes in 16 GB and 32 GB version. It has a micro SD card slot as well that can accommodate a card of up to 128 GB. 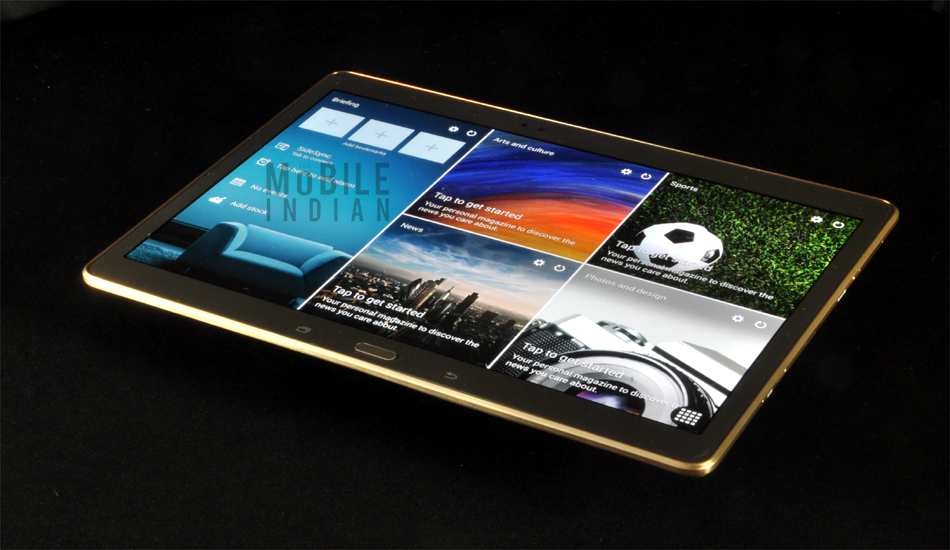 The Tab S 10.5 has a big display and an octa core processor. Naturally, it has huge power requirement. Samsung has wisely thus armed it with a huge 7900 mAh battery which provides superb back up. With normal usage, the tablet easily lasts couple of days. To give you some perspective, the tablet consumes about 15 per cent in one hour gaming while in one hour, it consumes about 10 percent charge. 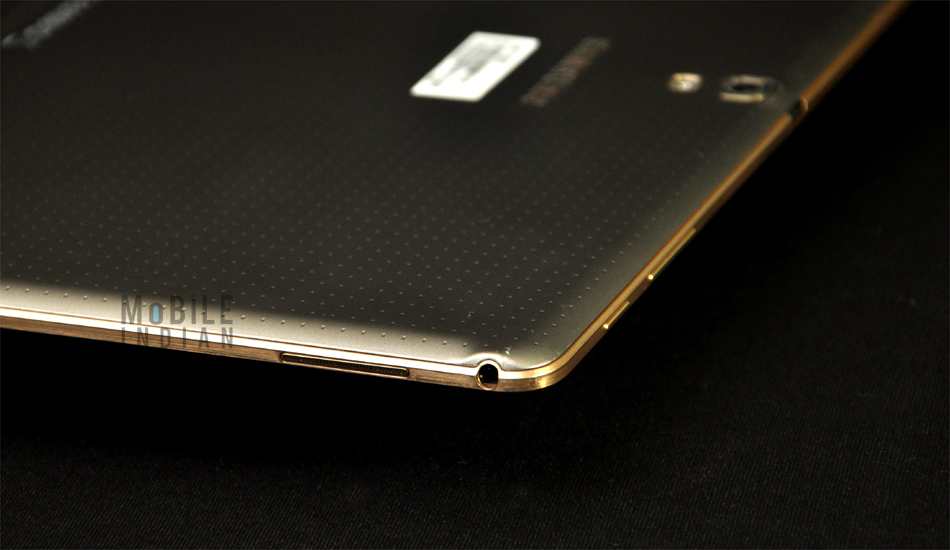 So even if you play for two hours and then watch two movies and browser for another two hour or so, the tablet will still have juice left to keep going.

The Tab S 10.5 has an 8 megapixel auto focus rear camera while in the front, it has a 2.1 megapixel camera. 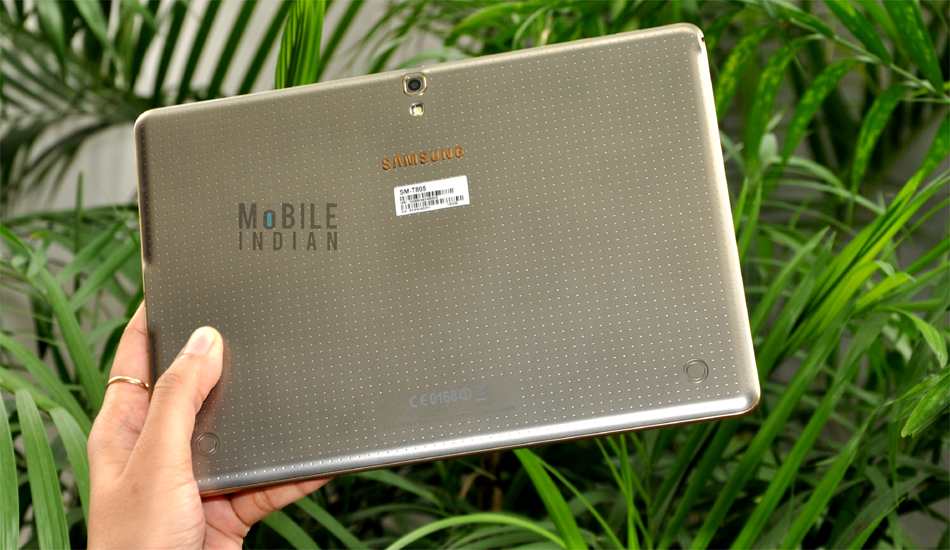 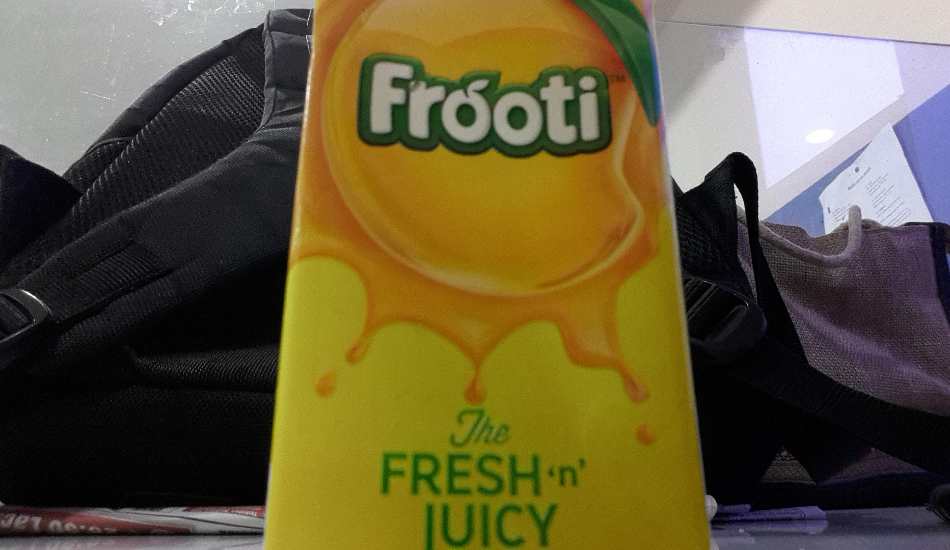 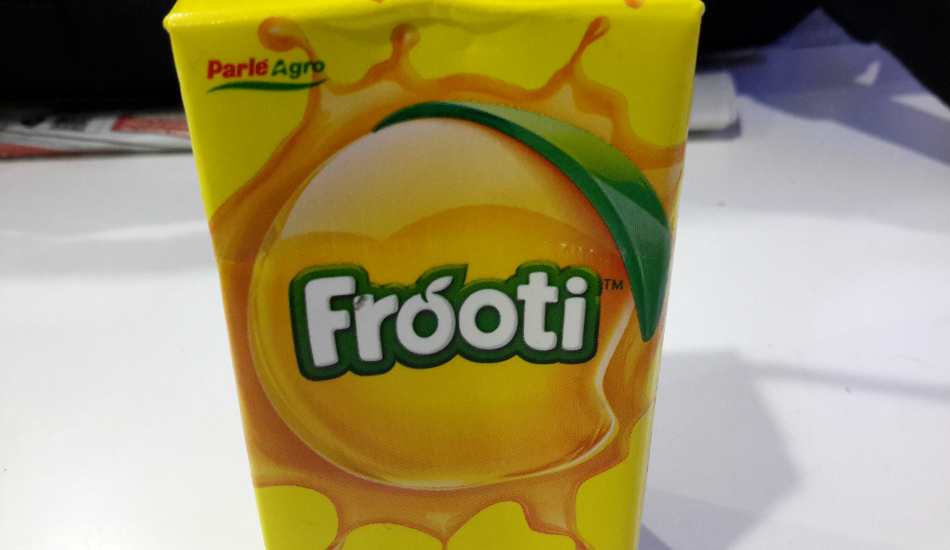 In the rear panel, there is an LED flash as well.

It is yet another area where the Tab S impresses. First of all, the Galaxy Tab 10.5 comes with a single micro SIM slot, allowing voice calling. Ofcourse it would look weird if it used for making phone calls like that of a regular mobile but the voice calling indeed is quite useful and you can always use a Bluetooth to make calls. 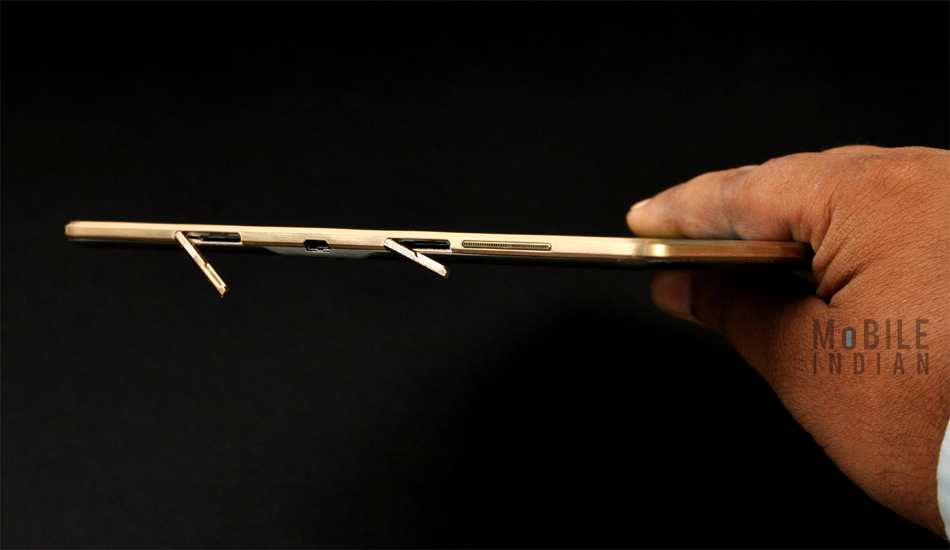 But the most important aspect is that the tablet comes with 4G connectivity and anyway in absence of 4G network, you can enjoy 3G connectivity. Besides, it has Bluetooth 4.0 LE version with A2DP. It has dual band WiFi connectivity along with WiFi hotspot and WiFi Direct feature. There is DLNA and an Infrared port. It has a micro USB 2.0 which acts as as MHL port as well. It also comes with a Download Booster feature that combines the bandwidth of your mobile internet with that of WiFi to increase the speed of download. 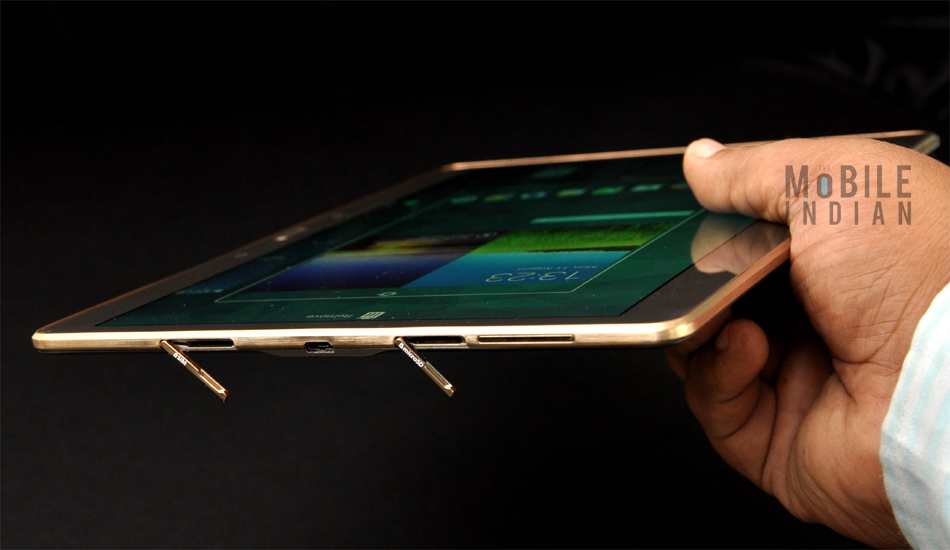 Besides, the Samsung Galaxy Tab S comes with SideSync 3.0 feature which allows it to be connected with a phone for easier data transfer. Once installed, you can see your phone’s screen on the tablet as well.

The Samsung Galaxy Tab S 10.5 is one of those rare devices that have almost everything that one could wish for in a tablet. It has a very user friendly design; display is awesome, and has a intuitive UI as well as a powerful processor. The battery back up is one of the best I have seen among tablets. So if you are looking for a 10 inch tablet and budget your not constraint, the the Samsung Galaxy Tab S 10.5 is highly recommended.