Samsung Galaxy M10 Review: Will it be able to make its presence felt? 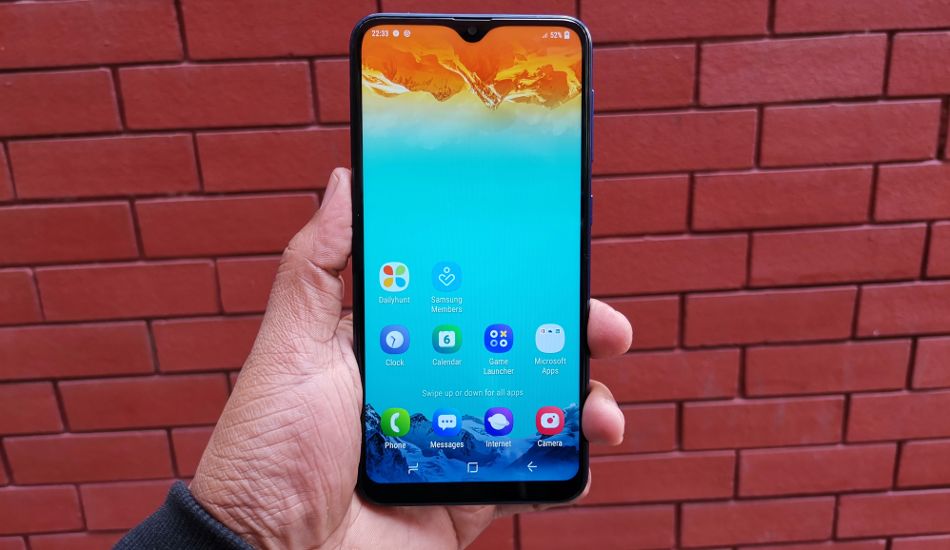 Does Samsung Galaxy M10 have enough to match the existing players who have already established themselves in the market in this price range?

Samsung had recently launched its budget Galaxy M10 smartphone in India in two variants. The 2GB + 16GB variant is priced at Rs 7,990 and the 3GB+3GB option comes with a price tag of Rs 8,990. The smartphone will be available on Amazon and Samsung website from February 5, 2019, in Ocean Blue and Charcoal Black colours.

With this budget smartphonelaunch, Samsung wants to take on players like Realme, Asus and Xiaomi. So, the big question, does it have enough to competewith the leaders in the budget segment? Let’s check out the review of Samsung Galaxy M10.

The striking thing in the Galaxy M10 is its design. The phone features a new Infinity-V display. The ‘V’ stands for the V-shaped waterdrop notch on the top. So, with this move, Samsung joins the notch display league. 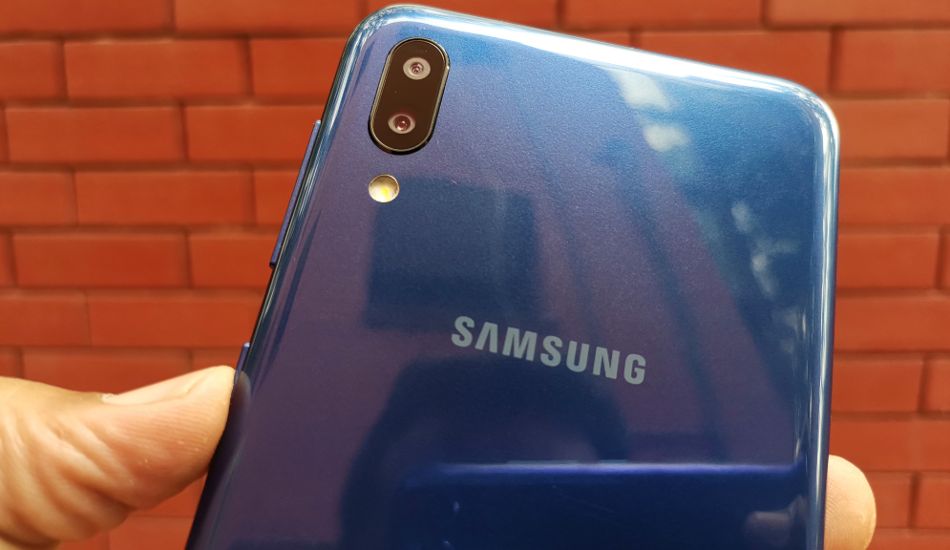 Samsung Galaxy M10 has a polycarbonate plastic body with plain glass finish giving an average look. It does not offer the gradient colour or glass-like finish like on Honor or Realme phones. The glossy back does accumulate fingerprints and smudges very easily. The phone has a slim build with curved edges.

The rear of the device has a dual camera with the LED flash. Just beneath it, one will find the Samsung branding. The top of the front features waterdrop notch featuring the front camera and just above it is the earpiece. At the bottom panel a micro USB port, a secondary microphone for noise cancellation, 3.5 mm headphone jack can be found.

The speaker grill is at the back of the phone. So if you are playing music with the phone kept down on a table, the sound gets muffled. On the right side, we have power on/off button and volume controls while the left has the 3-Slot SIM tray, which allows you to use two SIM as well as a micro-SD card at the same time. 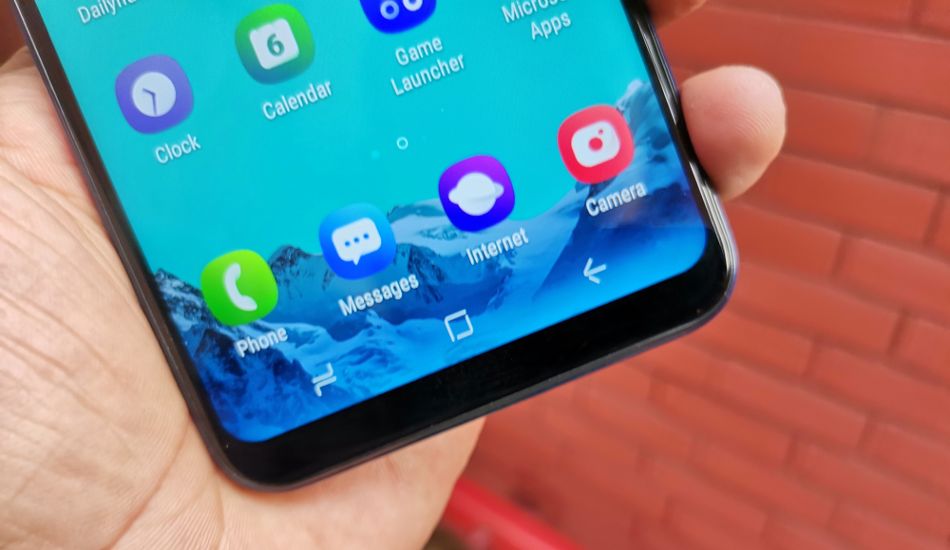 Now coming to display, the device features a 6.22-inch HD+ display with a screen resolution of 1520 x 720 pixels. In spite of a big display, the smartphone has a compact form factor thanks to its edge-to-edge display. During our review period, we found out that the display has good viewing angles and colours were punchy and crispy. Also, the touch response feels pretty smooth. While the screen is perfectly visible indoors, it might be a problem when using the device in outdoors. In outdoor conditions, you might want to turn off automatic brightness control to maximize the brightness. The phone also comes with Widevine L1 certification, which means you will be able to watch videos on popular platforms like YouTube, Netflix and Prime video in true HD quality.

The phone weighs160 grams and is quite comfortable to hold in hand. The phone measures at 155.6 x 75.6 x 7.7mm. One issue that some people may find in this phone is the absence of a fingerprint sensor. The phone only has face unlock technology for unlocking the phone which does just a decent job in good lighting, but in low light conditions, it was bad.

On the hardware front, the device is powered by a 14nm octa-core Exynos 7870 processor. The phone comes in different memory configurations including a 2GB RAM + 16GB storage option and 3GB RAM + 32GB storage variant. That said, the Galaxy M10 is providing an average processor in this price range. 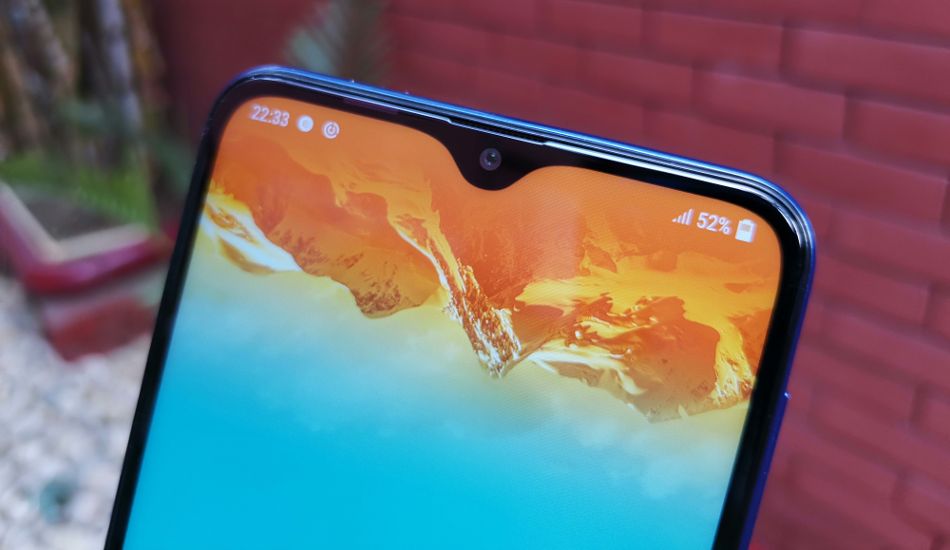 The Exynos 7870 was launched back in the year 2016 and is pretty old as far as chipsets go. The Exynos 7870 has eight Cortex A53 cores clocked at 1.6GHz. Looking at the sheer specifications, the device will face stiff competition with the likes of Asus Zenfone Max M2 and Xiaomi Redmi 6 Pro.

The variant we received for review has 3GB of RAM and 32GB of internal storage. On our 32GB variant, there was about 22GB of storage free, but onboard storage can be expanded further. When it comes to multi-tasking and it handles most of the daily tasks like surfing, streaming, social media etc. quite effectively and without many instances of lag. On clicking, the apps were launched smoothly within around 1-2 seconds. So as far as performance is concerned, we didn’t find any flaws in the day to day experience and the phone showed no signs of lagging while using. 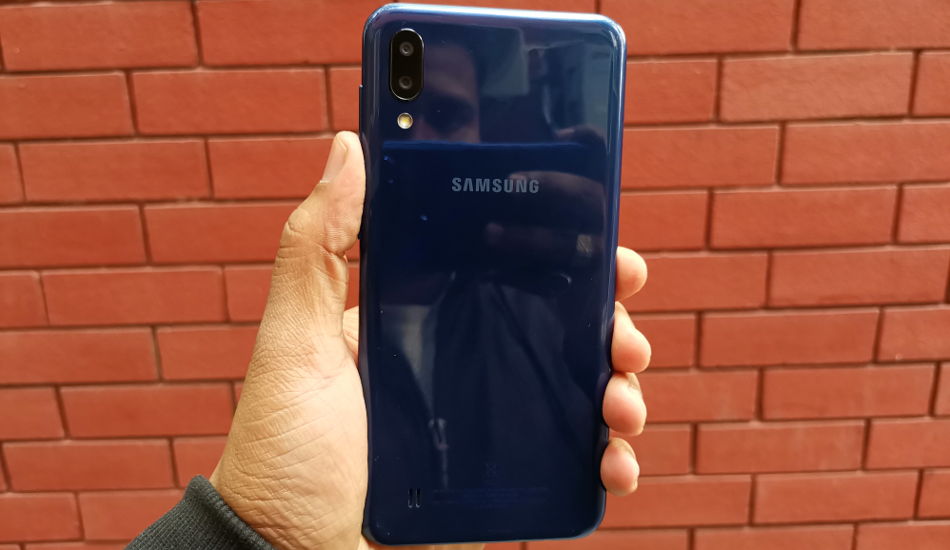 During our review period, we were able to play casual games like Candy Crush, Subway Surfer and Temple Run with ease. But the phone was not able to handle heavy games like Asphalt 8 and PUBG at even medium settings. The phone is not obviously made for the heavy gamers out there. If gaming is the priority for someone to buy a phone, probably he/she should look for other smartphones with a better chipset, preferably at a higher price range. But overall, the performance of this device is generally decent at the price point it has been made available.

On the software front, the Galaxy M10 runs on Android 8.1 Oreo, which is based on the company’s Experience 9.5 UI running on top of it. Samsung is using an older operating system which is disappointing as we expected to see new devices in 2019 to run Android Pie out of the box. But Samsung has already confirmed that the Pie update will be rolled out to the M10 in August.

It features an app drawer for accessing the apps. The pre-installed apps including Office, OneDrive, LinkedIn and FaceBook cannot be uninstalled. All you can do is disable them. 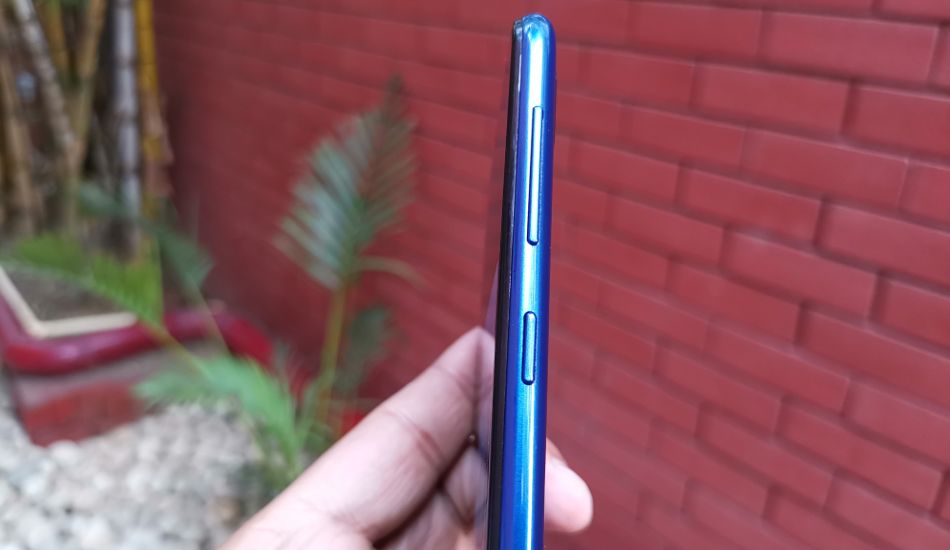 I am of the opinion that M10 has a cleaner UI, but it still has a long way to go.

The phone has lock screen Stories feature which shows you different images on the lock screen every time you unlock your phone. There is also dual-messenger feature on the phone as well which allows you to have two instances of apps such as WhatsApp or Facebook so you can use two different accounts on the same device.

The Samsung Galaxy M10 features a dual-camera setup at the rear with a combination of a 13-megapixel primary sensor with an f/1.9 aperture and a 5-megapixel secondary sensor with an f/2.2 aperture. With the secondary lens, you will be able to capture more area in a single frame. In the camera app one can switch between the standard field of view and an ultra wide field of view with a simple tap. For the front panel, there is a 5-megapixel f/2.0 selfie camera. 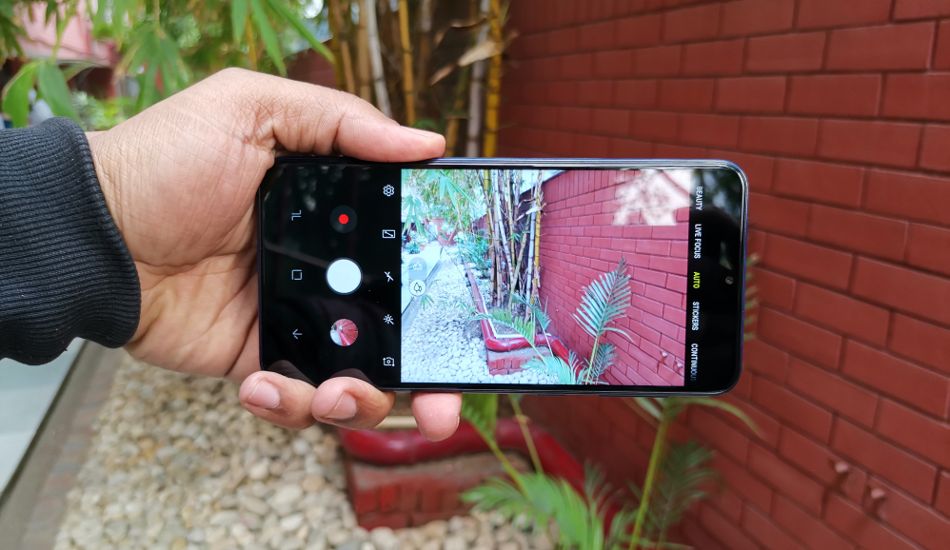 The company has kept the camera UI pretty simple and the camera has various modes like pro, beauty, live focus (portrait), stickers, continuous shots and panorama. One can also just swipe up or down to switch to the selfie camera. The camera performance of the Samsung Galaxy M10 in daylight was decent.

But in low lighting conditions, photos clicked came out to quite average and are high on noise and low on details. It takes a while to focus if one is clicking pictures in low light condition and for a perfect shot, you have to keep a steady hand. You can check out its camera test here and decide for yourself. 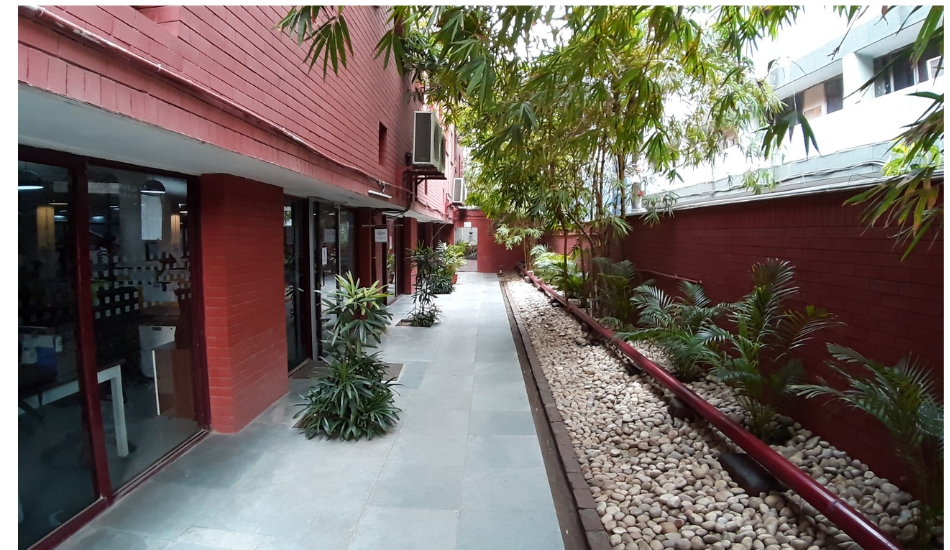 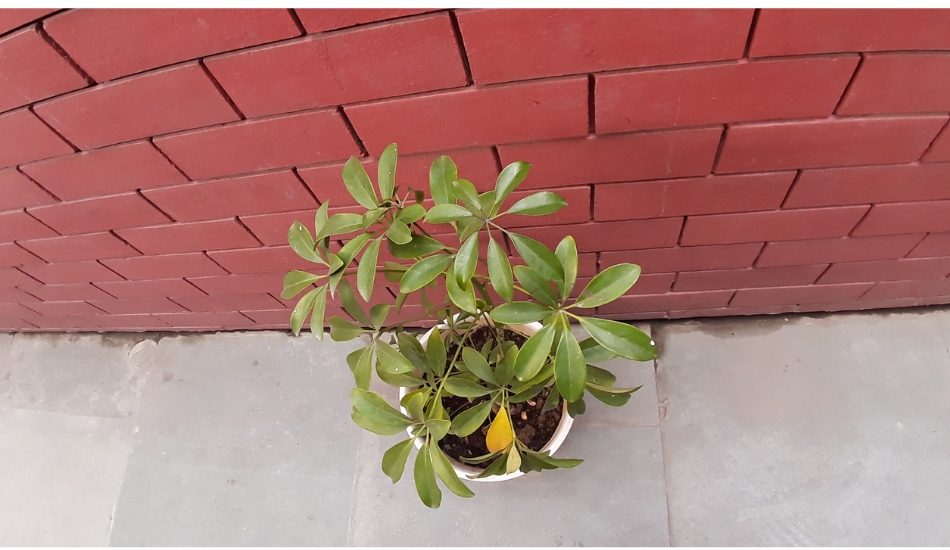 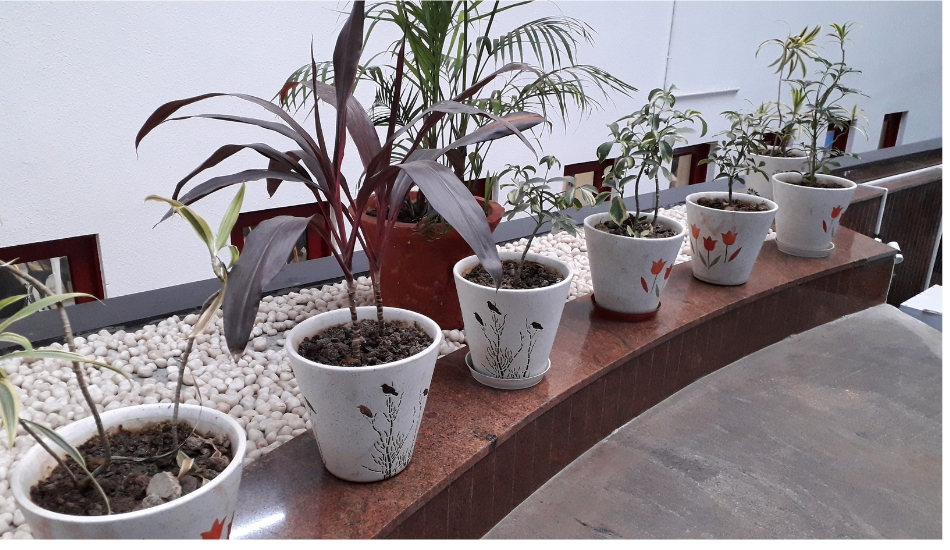 The phone does not have a dedicated night mode and, while you can use the Pro mode to improve on the image quality, you won’t be getting much better results out of this camera. The front camera does a decent job in capturing selfies when the lights are good, though the quality is reduced drastically. The Live Focus feature works perfectly fine and the phone is able to highlight the subjects properly. The wide-angle lens does a decent job in capturing a wider area, which is a good thing.

The camera app also includes Samsung Mall app which allows users to click pictures of the product they want to search and purchase or choose an image from the gallery to start shopping. Both the front and rear cameras are capable of recording full-HD video. The camera setup on the Samsung Galaxy M10 is acceptable for the price. Overall, it delivers decent camera performance at this price point.

Samsung Galaxy M10 is fueled by a 3400mAh battery but it comes without any fast charging support. At this price point, a USB-Type C port would have definitely helped the phone to stand out in competition. 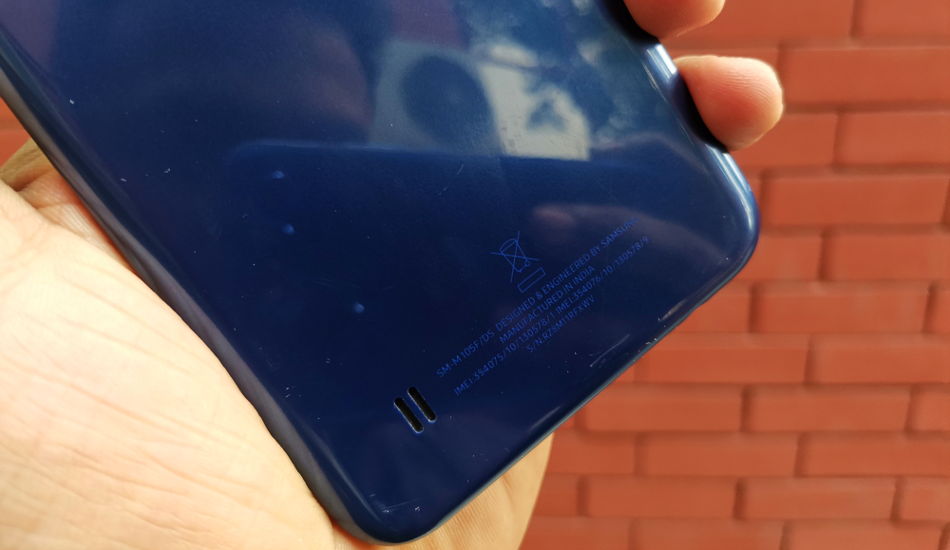 The battery on a full recharge can last one full day under normal usage which includes using social media, chatting on WhatsApp,music streaming, surfing the net,and taking calls. Depending on the user’s usage, the phone could last an average of one and a half days. However, charging is quite slow. In our testing period, the device takes around three to charge from zero to 100 percent.

Samsung Galaxy M10 comes with an impressive compact form factor, good display, average camera, Android 8.1 Oreo and decent battery life. It is a solid option for those who are looking for a well-built, modern-looking phone that does the basics, though it is not meant for serious gaming. At this price point, the phone goes right up against the RealMe C1, and Xiaomi Redmi 6 both of which are its strong competitors. If you do go for the Samsung Galaxy M10, we recommend you buy the 3GB RAM/ 32GB storage variant.