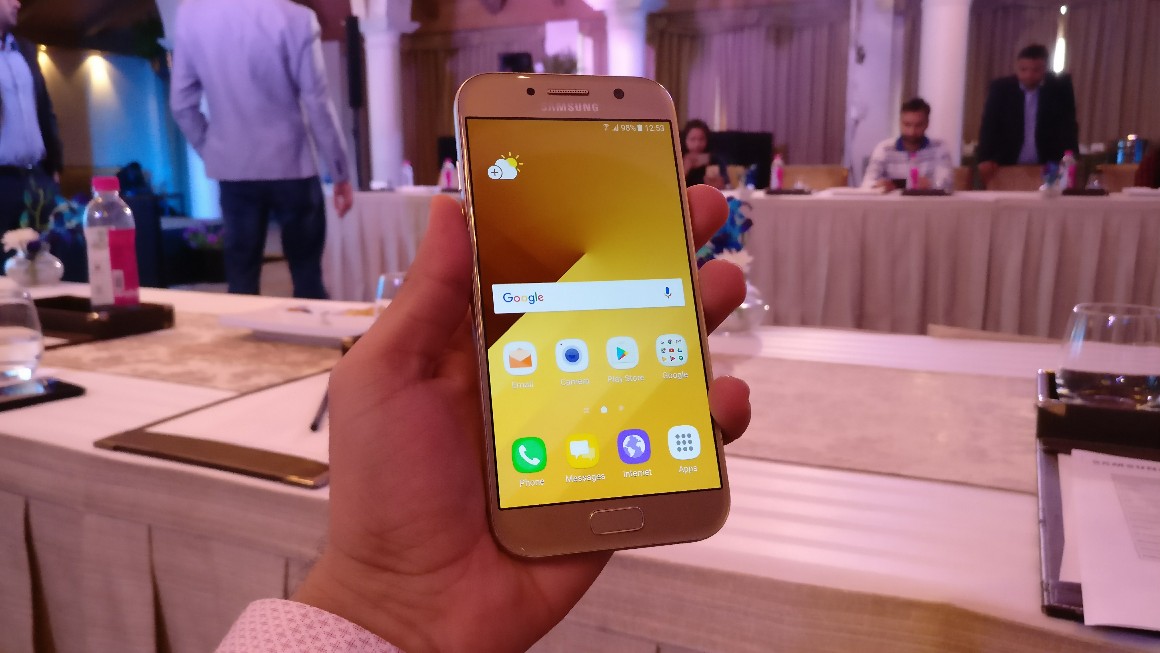 Both the devices are essentially the same devices except the screen size and battery capacity. We had the chance to use both the devices for a brief period of time and here are our thoughts.

Design and Display
The Galaxy A5 (2017) and A7 (2017) comes with a glass design with a metal frame around the edges. To give a symmetrical feel and look, Samsung has given a 2.5D curved glass both at the front and back of the device. Based on our first impressions, both the Galaxy A5 and A7 feels premium in hands but doesn’t offer a solid grip while holding it for long. Apart from this, the back of the device is a fingerprint magnet and you will find yourself cleaning the surface every now and then. For a quick physical overview, the power button lies on the right along with the speaker grill while the volume rockers sit on the left side of the device. The device comes with two SIM slots, one located on the left and one located at the top which also has a microSD compartment. The USB Type-C port, 3.5 mm headphone jack and the primary microphone is located at the bottom of the device while at the back we get the primary camera along with a LED flash. Up front, we get the earpiece up top with some sensors and the front camera sensor and just below the display is where Samsung’s trademark physical home button lies which also acts as a fingerprint scanner. 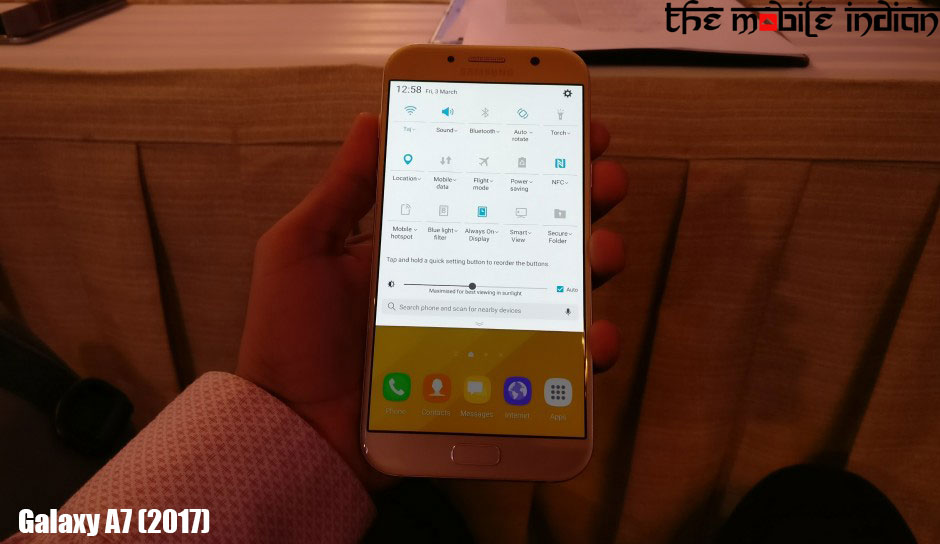 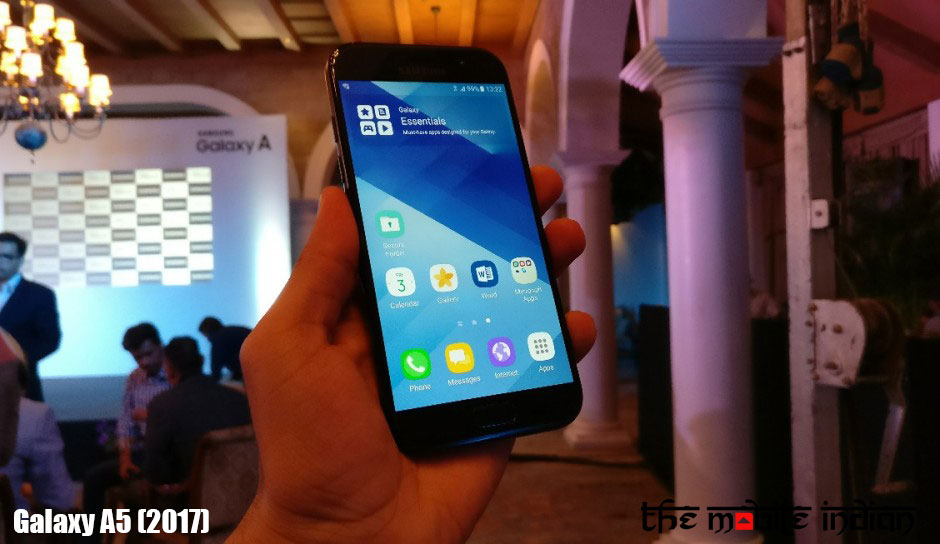 Well, judging a device’s performance in a short time of usage will be unfair. Nevertheless, the Galaxy A5 (2017) and A7 (2017) didn’t pose any issues during the time we had the device with us. Both the devices run on Android 6.0 Marshmallow, which might be a bummer for some but we expect Samsung to soon roll out Android Nougat update even though the officials didn’t give us any ETA (Estimated Date). For the internals, both the Galaxy A5 and A7 comes with a 1.9 GHz Octa-Core Exynos 7880 chipset coupled with Mali-T830MP3 GPU. Moreover, we get 3GB of RAM and 32GB of internal storage which is expandable upto 256GB via a dedicated micro SD card. There is nothing new in the software as both the devices come with Samsung’s on Touch UI skin on top of Android Marshmallow. Both the devices had some kind of bloatware which might be an issue given how heavy Samsung’s skin behaves on top of Android. In short, we will have to test both these devices thoroughly in order to come to a conclusion for the performance. As of now, it is so far so good. 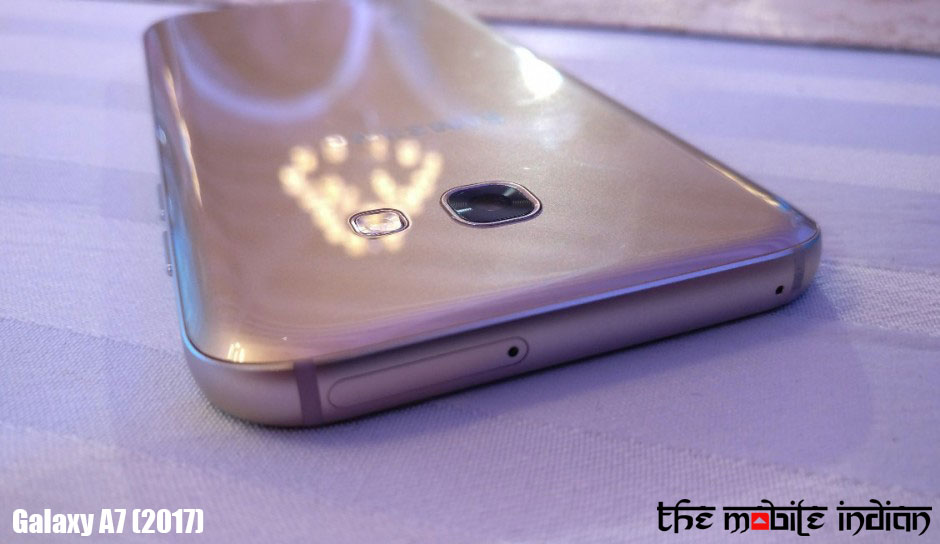 Samsung has a reputation of putting in some great cameras in their devices across all price segments. The camera on the Galaxy S7 and S7 Edge was rated one of the best in the business at the time of its launch. In 2017 Galaxy A series, Samsung has given in 16-megapixel sensors both at the front and back of the device with f/1.9 aperture and LED flash at the back and no 4K video recording as we get maximum 1080p video recording on both the devices from both the cameras. One of the nifty little features which Samsung has included in this year’s Galaxy A series is a floating capture button for easy selfies. This option would basically allow you to click selfies from any location on the viewfinder. Apart from this, Samsung has also given in gestures inside the viewfinder which would enable you to navigate between different modes with just a single swipe. In terms of performance, the cameras on both the devices did look promising in the first instance. The front-facing 16-megapixel camera also looked decent even though we tested it out in low lighting. Nevertheless, we would highly recommend you to wait for a detailed camera test to analyse the camera capabilities of this year’s Galaxy A series.

Battery, Connectivity and Water Resistance
Super AMOLED displays are also battery friendly in most cases and we expect similar kind of results here. The smaller sized Galaxy A5 comes with a 3000 mAh battery while the big brother, the Galaxy A7 comes with a 3600 mAh battery. Both the devices should grind you through the day, however, we will get the full picture only once we are done with the review. 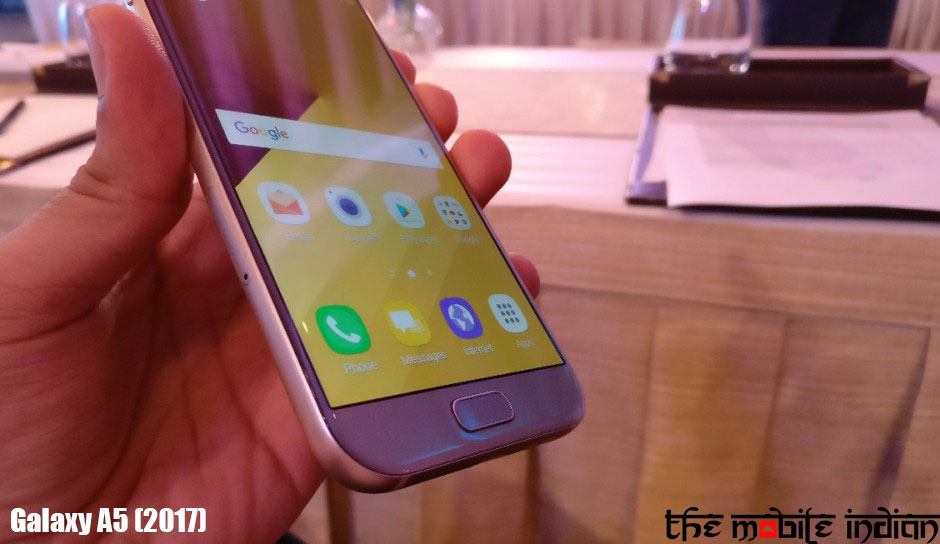 On the connectivity front, we get Wi-Fi 802.11 a/b/g/n/ac, Bluetooth v4.2, GPS, NFC, USB Type-C for charging and data syncing. We also get fast charging on both the devices.

Priced at Rs 28,990 and Rs 33,490, the Galaxy A5 (2017) and A7 (2017) seems to be a tad bit expensive but you get Samsung’s goodwill along with it. While we surely have a stiff competition in this price bracket, both the Galaxy A5 and A7 (2017) look promising. The IP68 certification is definitely a plus and Samsung’s long successful run in camera and display department is expected to continue here as well. But, this is not our final verdict. Stay tuned to our reviews about the smartphones for in-depth analysis.