The smartphone shares a similar set of characteristics with its elder brother. So, the question here is: Does it make a worthy option?

Samsung seems to be on a launching spree as the company has introduced three smartphones in within 24 hours. The company introduced Galaxy M30 yesterday evening and now, it has launched the Galaxy A50 and Galaxy A30.

We have already talked about the Galaxy M30 and Galaxy A50 in our first impressions, it is now time for the Galaxy A30. The smartphone comes with a price tag of Rs 16,990 and it will be available for purchase from both online and offline channels starting from March 02, 2019.The smartphone shares a similar set of characteristics with its elder brother. So, the question here is: Does it make a worthy option over Xiaomi Redmi Note 7 Pro which has also been launched today? We got the chance to spent some time with the device and this is what we think of it. 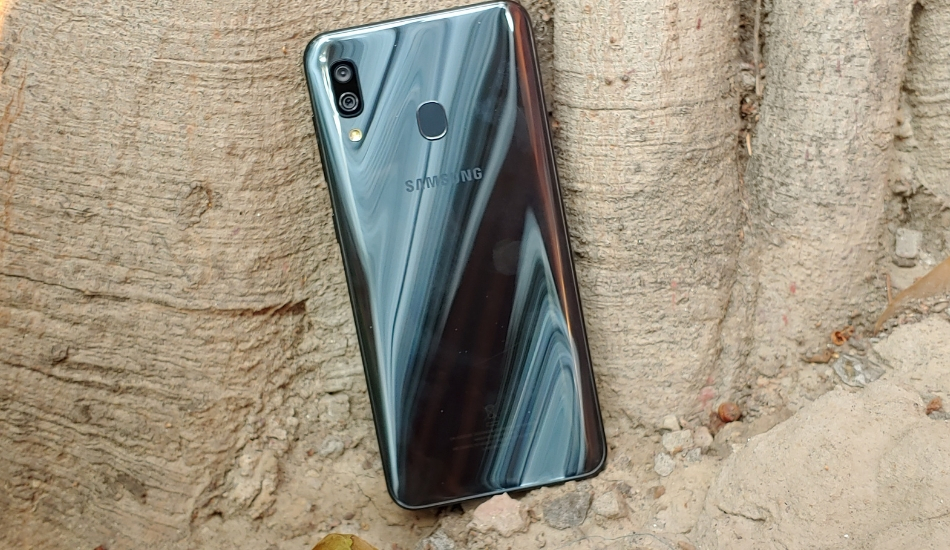 Starting with the design, the Samsung Galaxy A30 is built on similar lines with the Galaxy A50. You get a glossy finish at the back panel and the body is made with polycarbonate. It comes with a reflective finish, which is visible when the light falls on it. The front features an Infinity-U display, which is Samsung’s iteration of waterdrop notch.

Briefing about key design language, the right side of the phone comes with volume rocker and power on/off button, while left features dual-SIM slot and a dedicated microSD card slot. The base of the device features a 3.5mm audio jack along with USB Type-C port and speaker grille. The back panel of the phone comes with a dual-camera setup at the top-left corner and there is a fingerprint sensor as well. That said, the Samsung Galaxy A30 comes with a pretty standard design language at this price range. However, we liked the fact that it is sleek and comfortable to hold. However, the standard problem of smudges remains with this device as well. Check out the pictures of the Samsung Galaxy A30. 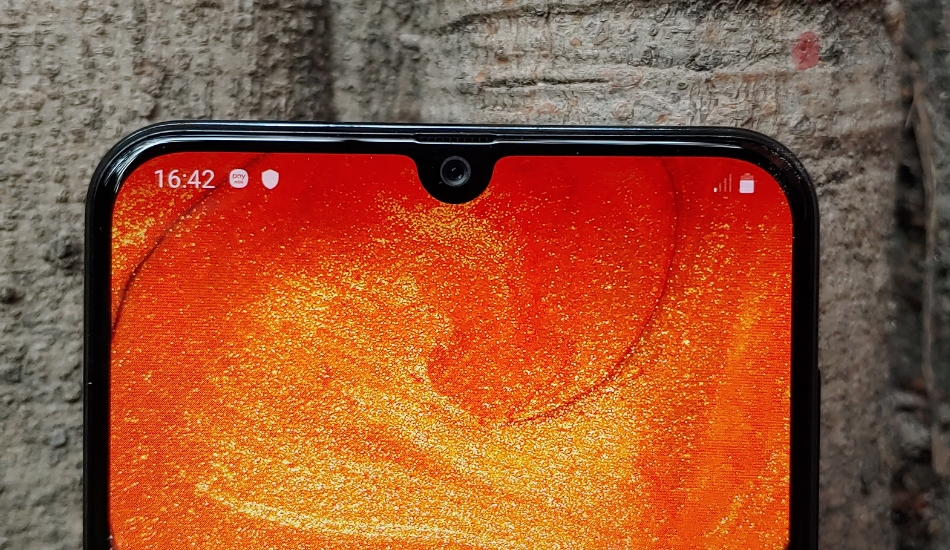 Coming to the display, the Samsung Galaxy A30 features a 6.4-inch Full HD+ sAMOLED display with a screen resolution of 2340 x 1080 pixels. The screen offers good colour reproductions with deep blacks. The viewing angles are decent enough, though we feel that the display is a bit reflective in nature.

On the hardware front, the Samsung Galaxy A30 is powered by an octa-core Exynos 7884 chipset, which is clocked at 1.8GHz. The phone is backed by a 4GB of RAM and 64GB of internal storage. The Exynos 7884 is a variant of the Exynos 7885, which was introduced in 2018. Although the performance of the device is yet to be tested out in different scenarios, however, judging by the specs sheet, the phone will face stiff competition with the Nokia 6.1 Plus, Vivo V9 Pro, Xiaomi Mi A2 and company’s own Samsung Galaxy M20. 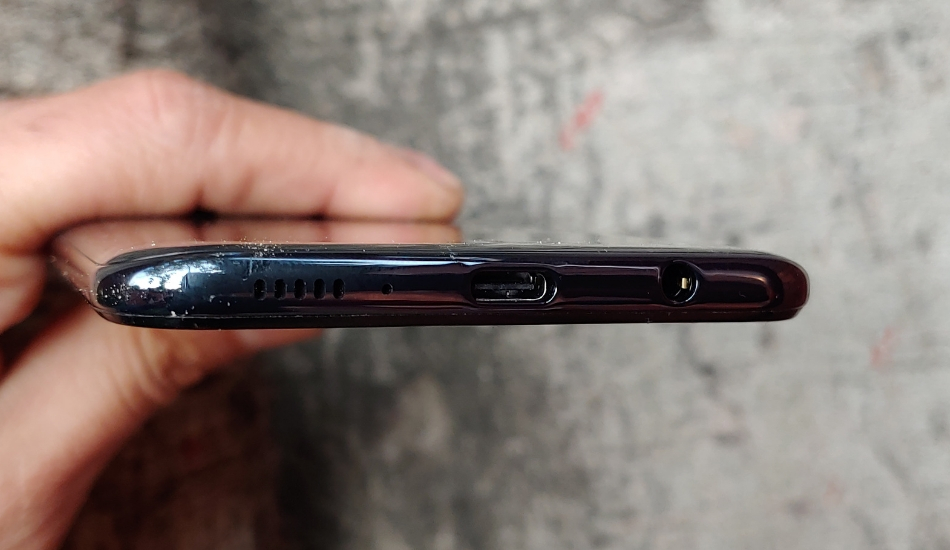 On the software front, the Samsung Galaxy A30 runs on Android 9.0 Pie with company’s OneUI running on top of it. The user interface is smooth in our initial testing and it would be interesting to see its performance when we start filling up the device with apps and other contents.

Talking about the camera capabilities, the smartphone is equipped with a dual-camera setup with a combination of 16-megapixel primary lens and a 5-megapixel ultra-wide angle sensor. For the front, there is a 16-megapixel shooter for selfies and video calling. 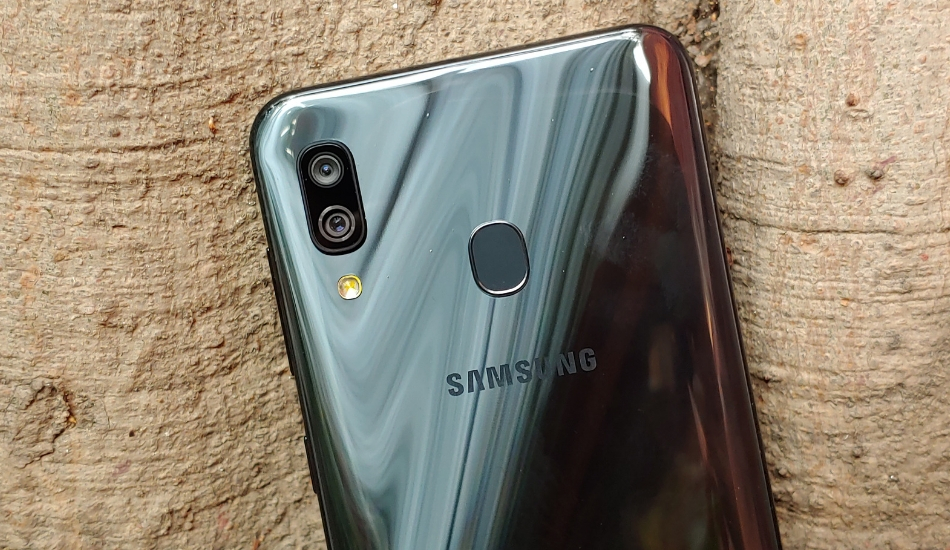 Coming to the battery, the phone is juiced up by a 4000mAh battery and the company is also offering 15W fast charger with this one. On the connectivity front, it is equipped with Dual 4G VoLTE, Wi-Fi 802.11 ac (2.4GHz + 5GHz), Bluetooth 5, GPS + GLONASS, NFC and USB Type-C port.

The Samsung Galaxy A30 seems to be a toned down version of the Galaxy A50, rather being a new smartphone. The phone comes with a similar design language sans the Prism finish you get in the Galaxy A50. The display looks good and the performance is yet to be tested out. As for the competition is concerned, it will be locking its horn with Xiaomi Redmi Note 7 Pro, Nokia 6.1 Plus, Realme U1, Oppo K1 and more.