Realme Narzo 20A Review: Is performance upto the mark? 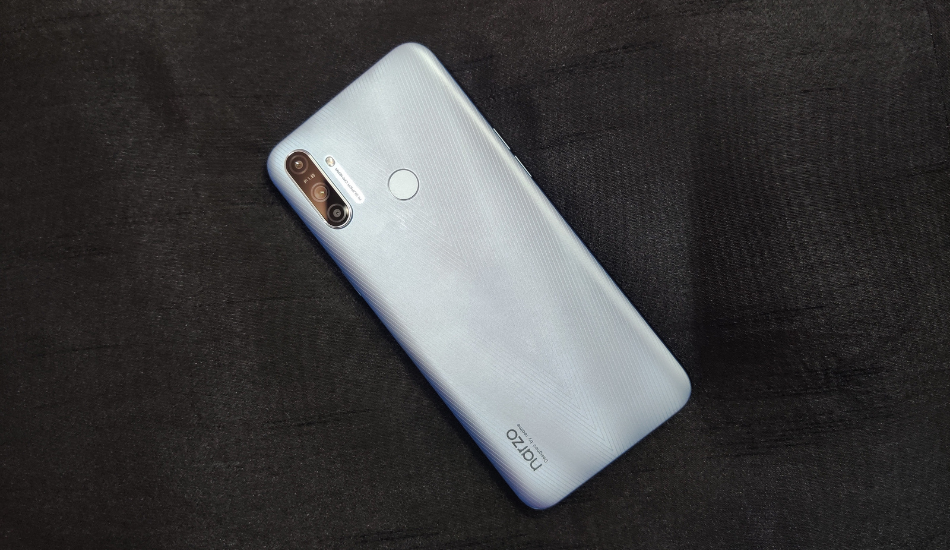 The Realme narzo 20A was launched a couple of weeks back at a budget price. Does it fare out to be a nice device? Take a look at our review to find the answer!

The Realme Narzo 20A was launched sometime back. The3GB/32GB variant is priced at Rs 8,499, while the4GB/64GB model costsRs 9,499. In the last few weeks, we have seen quite a few smartphones been launched in under Rs 10,000 segment. Is Narzo 20 A good enough to take on the competition? Let’s check it out, in our review. 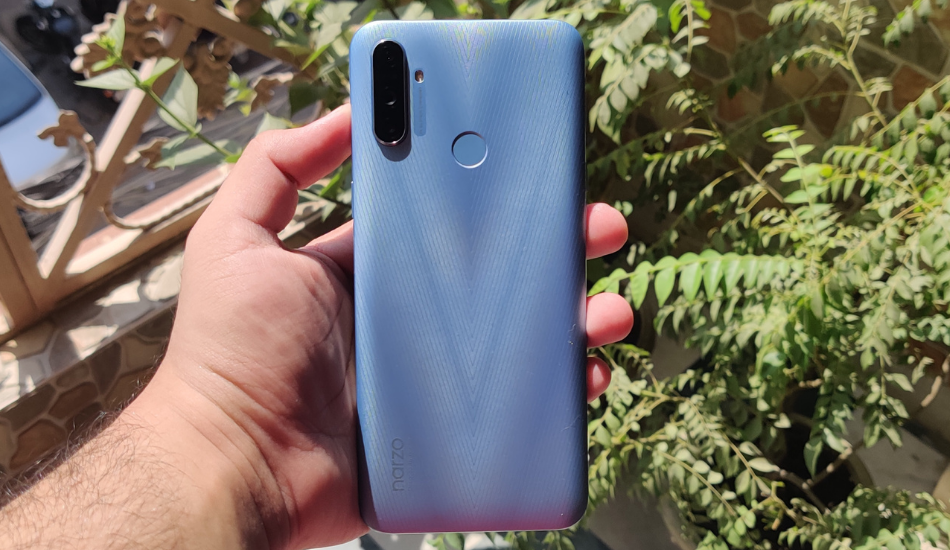 TheRealme Narzo 20A’s build is of plastic all around. On the rear, we have a ‘V’ pattern on the entire rear of the device also containing a fingerprint scanner and camera module with a triple-camera setup. There’s no premium feel when you hold it but the device feels light even though it has a huge battery. This also signifies the correctly done weight distribution. 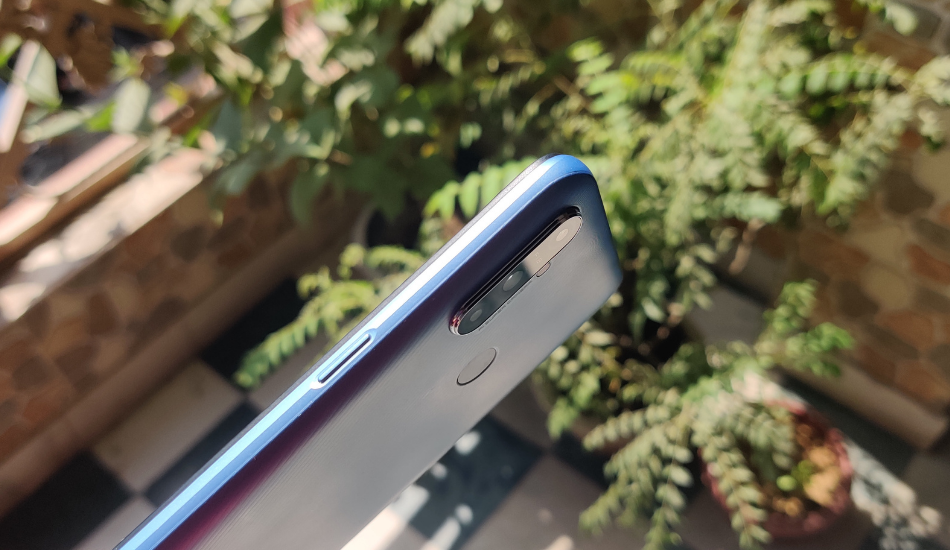 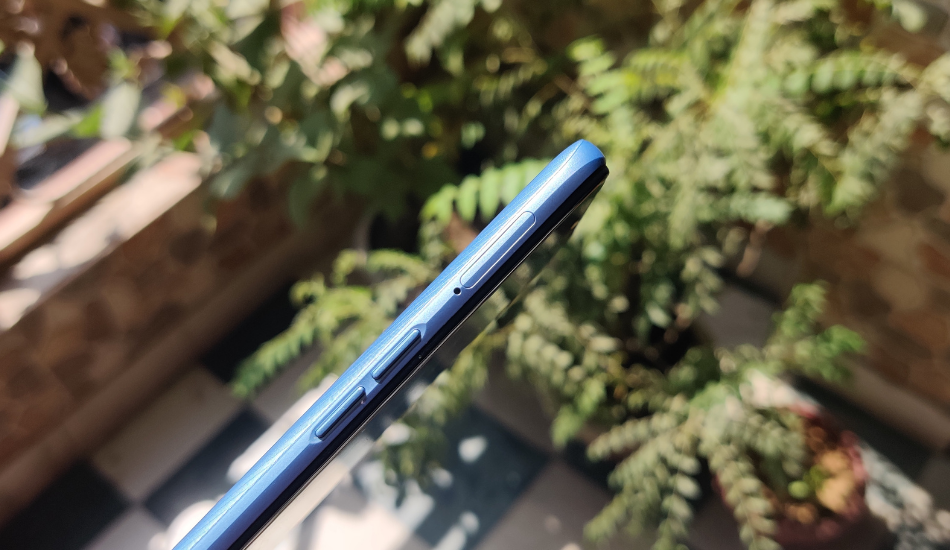 On the right of the smartphone, we have the power button whereas on the left we have the volume rocker and the SIM tray which supports Dual-SIM and a Micro-SD card of up to 256GB. On the bottom, we have a 3.5mm headphone jack, surprisingly a Micro-USB port which we also saw in the similarly priced Moto E7 Plus, a speaker and a mic.

There’s no point of providing a Micro-USB port in 2020 even if the device is in the budget segment as most of the tech ecosystem is now Type-C compatible. We had a similar complaint with the Moto E7 Plus and the same applies here.

The buttons of the device felt tactile and clicky. The fingerprint on the rear was quick and responsive and the speaker on the bottom was pretty good with no muffled noises and got loud enough. 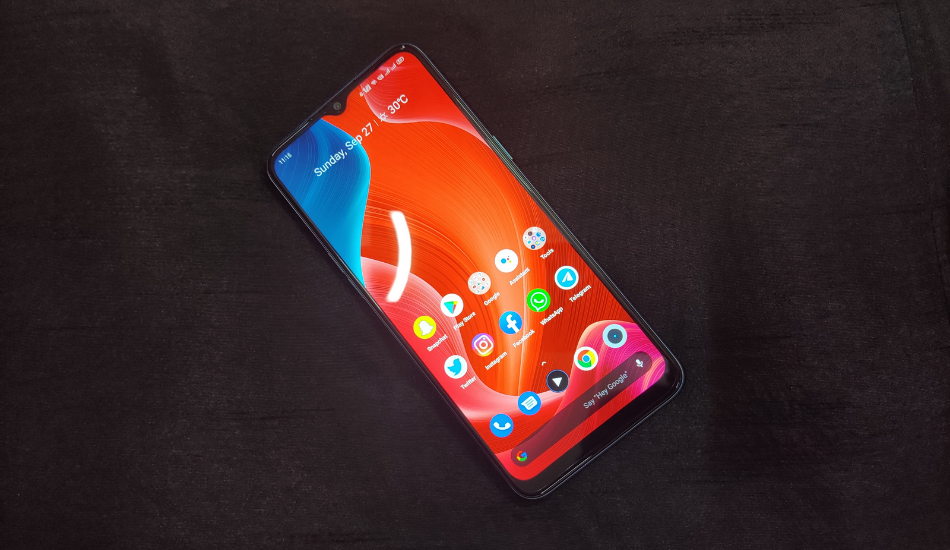 On the front, we have a 6.5-inch HD+ LCD display with a resolution of 1600×720 and a teardrop notch housing the front camera. The colours looked good, the sharpness of the text was also fine and the overall experience was satisfactory. 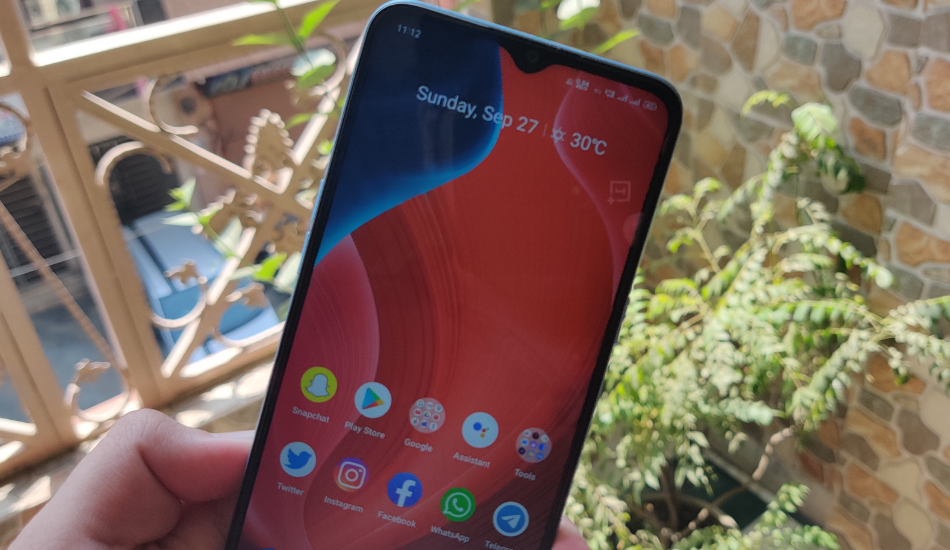 The device is powered by the Snapdragon 665 paired with 3GB/4GB of RAM and 32GB/64GB of storage. The device runs on Realme UI 1.0 based on Android 10 and is slated to get Realme 2.0 based on Android 11 in Q2 of 2021. The unit we got was the 4GB/64GB variant and the RAM management in the device was good. Out of the box, the device had around 50GB available and the rest was taken up by the system. But the storage shouldn’t be an issue as you can insert a microSD card of up to 256GB. 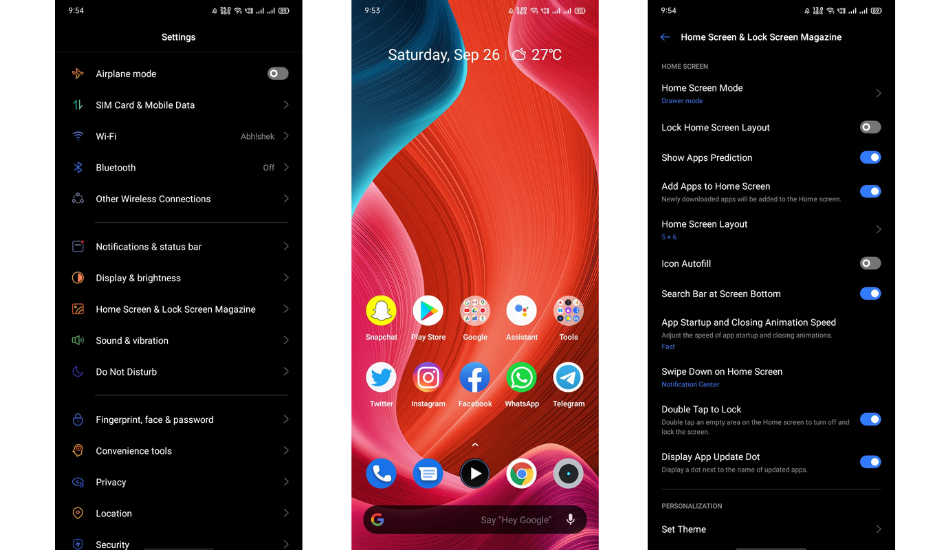 Coming to the performance, the app launches were pretty slow which is not what I had expected. Although the device has all the nifty features like the smart sidebar, game space, etc, which comes in Realme UI, the performance of teh Narzo 20A is below average As the device has a far better processor than the recently launched Moto E7 Plus, it was supposed to perform much better than it but sadly the software hampered the experience. The same Realme UI 1.0 performed exceptionally well in the Narzo 20 and Narzo 20 Pro, but in 20A, the app launches were slow, and I did face minor lags while performing day-to-day tasks like switching apps or browsing through Chrome, Facebook, etc. This happens mostly if the software isn’t optimized properly for the smartphone.

These were the issues I had faced but can be easily fixed with software updates. Gaming on the Realme Narzo 20A was great at medium graphics while playing Call Of Duty Mobile as I was getting 60fps constantly. Once you switch to highest graphics, the frame rate straightaway drops to 27-30fps but the game is still playable. While playing the Asphalt 9, the device struggled to cope up with high graphics but again, at medium graphics things looked okay and the device handled the game pretty well.

Narzo 20A has a 5000mAh battery which also supports reverse charging which means you can charge other phones with the Narzo 20A. The device supports 10W charging with the charger being provided in the box.

The battery life of the device was great. It gave me almost 7.5 hours of screen-on time with 25% juice still left on heavy usage. We can almost expect an hour and a half of more screen-on time which is amazing in my opinion. In my usage, I gamed for about 40-50 minutes, and in the 16 hours of total usage in the above picture, the stand-by time was around 6 to 7 hours in which I lost 1-2% of the battery. The rest of the usage includes browsing through Chrome, Facebook, Instagram, etc and watching some videos on YouTube. 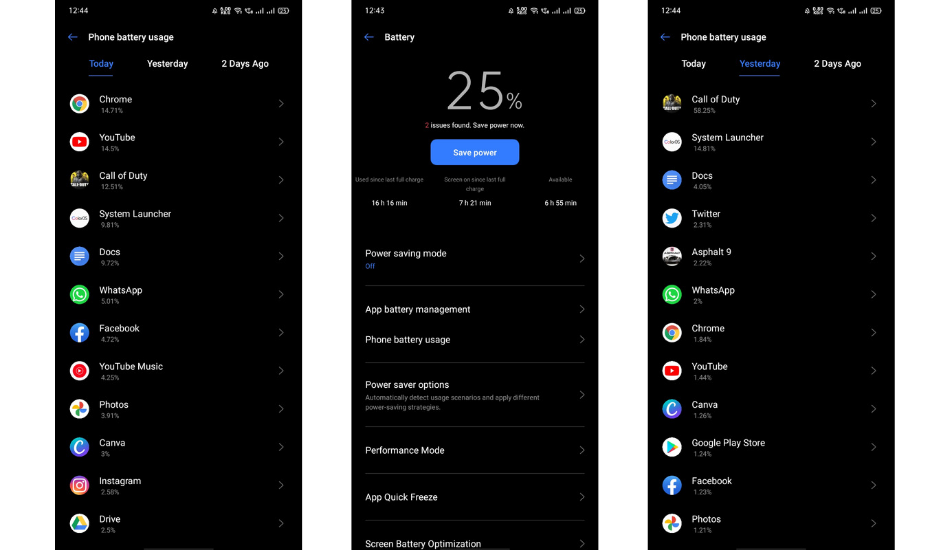 On days with light usage, the device can easily last more than a day and maybe even 2 days. The device took almost 2.5 to 3 hours to charge which in my opinion could have been faster with support for faster charging.

Overall, the device excelled in the battery department. 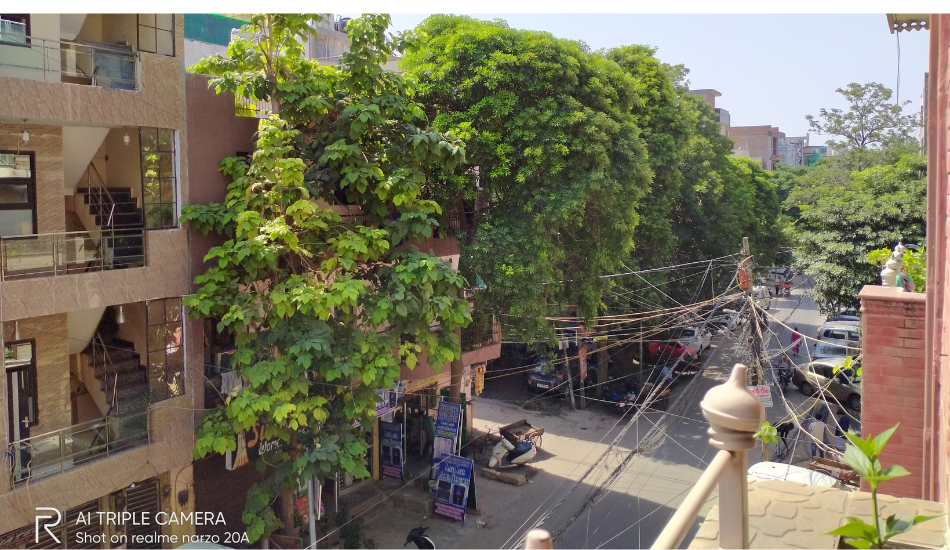 The photos from the device surprisingly came out to be good. Though it did change the colours of the tree’s leaves in the photo above but the dynamic range is good and the photo came out to be bright. Some details were missing when zoomed in but the photo was satisfactory. 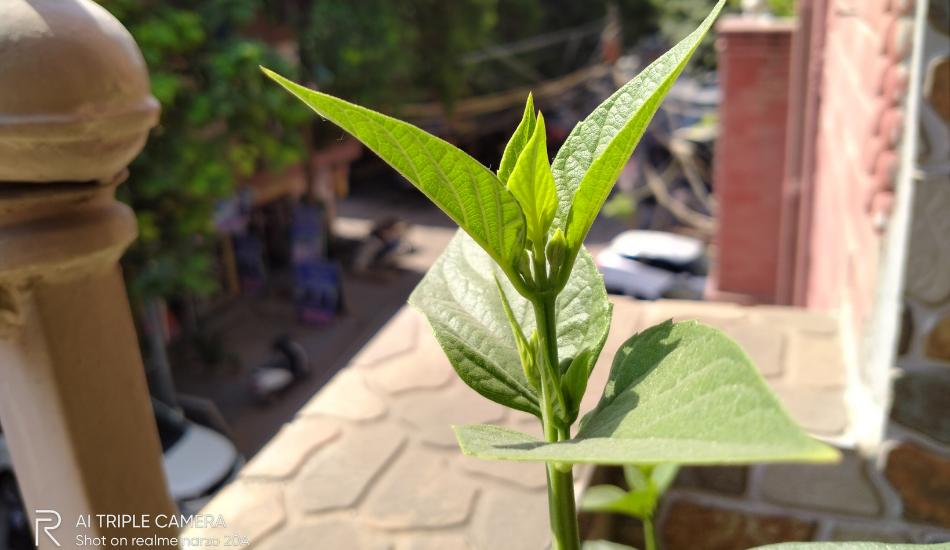 When clicking close-up shots, the photos had plenty of detail and a great bokeh effect. The colours did change a bit again, same as what the primary lens did, but the overall image quality was good. 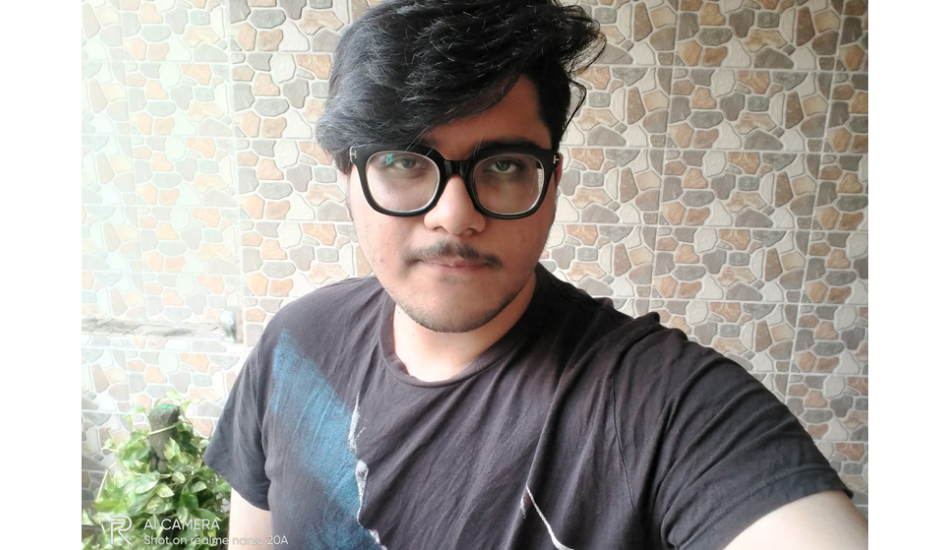 The colours in the selfies were natural when the photo was taken in broad daylight but the selfies did look soft and details were definitely missing. 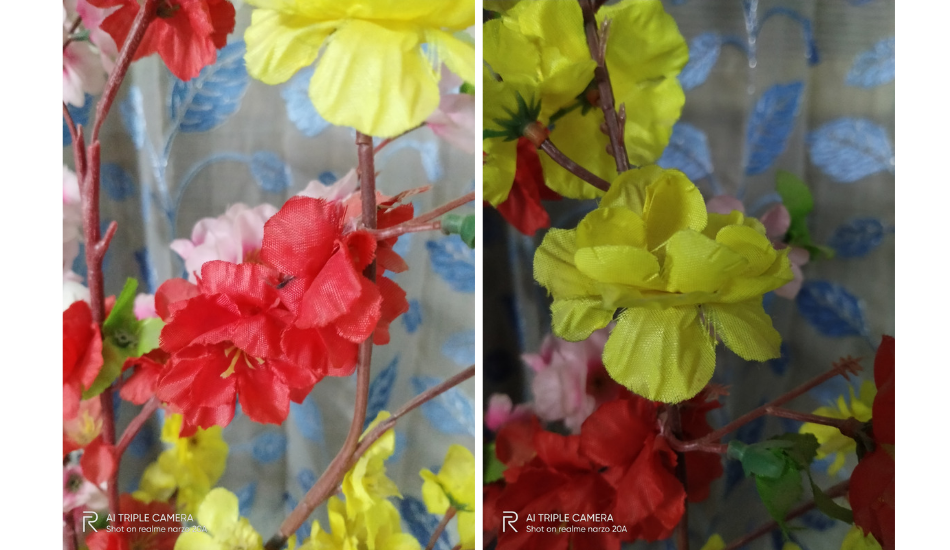 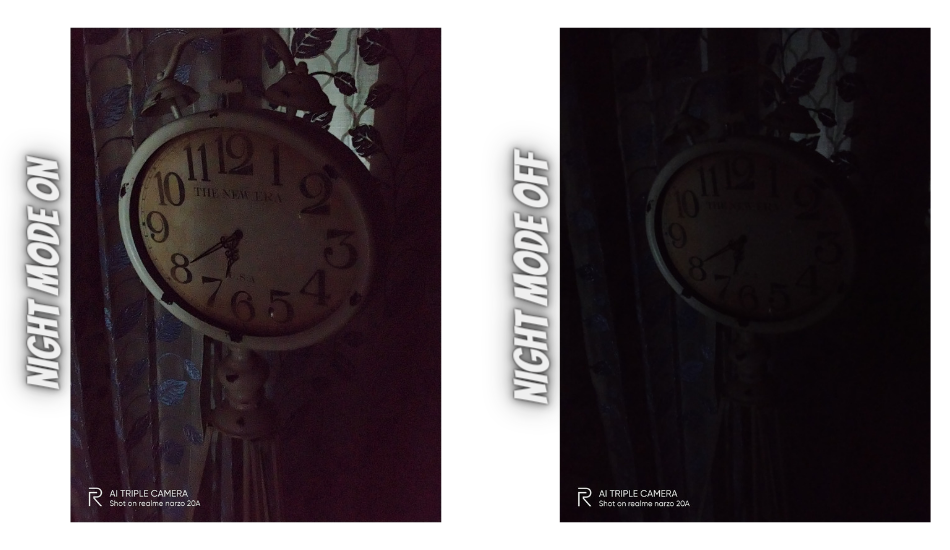 When clicking photos under artificial lighting, the device did struggle with details and focussing but the colours looked to be good. Night mode also worked as it should have, but as expected, the photo turned out to be noisy.

Realme Narzo 20A seems to be a decent smartphone but software needs an update. As of now, it is buggy and shows signs of lagging.