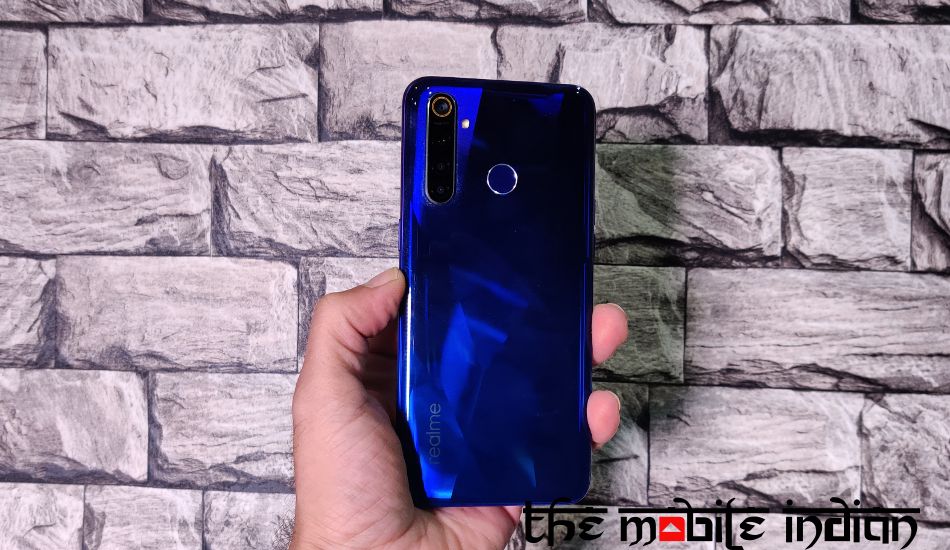 Does it make any sense to go for the Realme 5 Pro? We spent some time with the device and here are our first impressions.

The main USP of the latest device is its quad camera setup with 48-megapixel as primary sensor. With this, the company is strengthening its position in the budget segment by offering some standard hardware and camera specifications. The latest smartphone from Realme also features the Diamond-cut finish which we have seen in recently launched Realme 3i. So, does it make any sense to go for the Realme 5 Pro? We spent some time with the device and here are our first impressions.

Starting with the design first, the Realme 5 Pro is available in Crystal Green and Crystal Blue colour options. We have received the Crystal Blue variant for review and it certainly looked premium from all angles. With this phone, the company has brought back the Diamond-cut finish, which it introduced with the Realme 1 smartphone. Realme has added a glossy finish on the back of Realme 5 Pro with laser carving. The pattern gives a different colour when light falls on it with a 3D diamond finish. 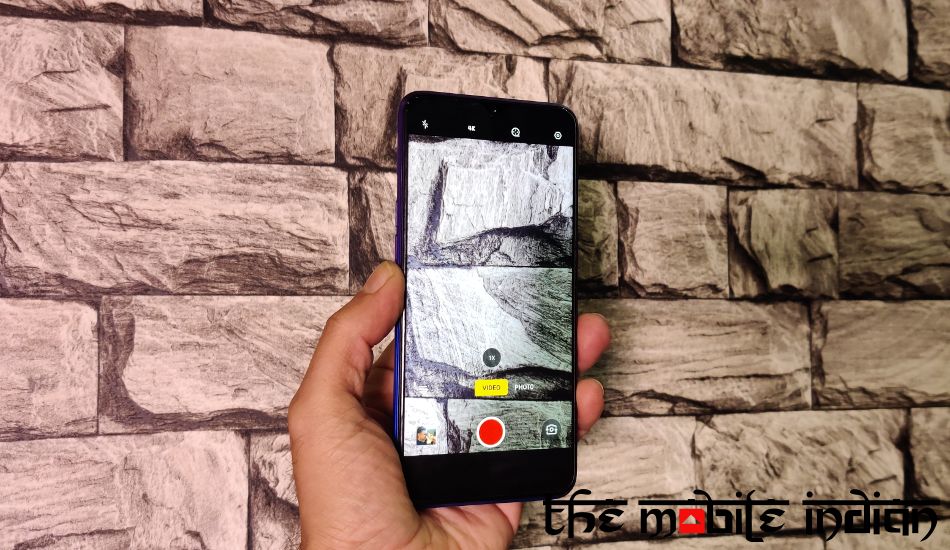 The phone features a waterdrop notch at the front housing front-facing camera and just above it is the earpiece. It features a quad camera setup at the back panel along with a fingerprint sensor. The right side features a power/off button, while the left features, volume controls and dual SIM + microSD card slot. At the bottom, we have a micro USB port, speaker grill, a secondary microphone for noise cancellation and 3.5 mm headphone jack.

Now coming to display, the device features a 6.3-inch full HD+ display with a screen resolution of 2340 x 1080 pixels with 90.8 percent screen ratio and Corning Gorilla Glass 3+ protection. The phone is 184 grams in weight and is quite light and comfortable to hold. The phone measures at 157 x 74.2 x 8.9mm. For unlocking the device, there is a fingerprint sensor as well as face unlock apart from regular PIN and pattern options. We found both of them quite fast in unlocking the device. 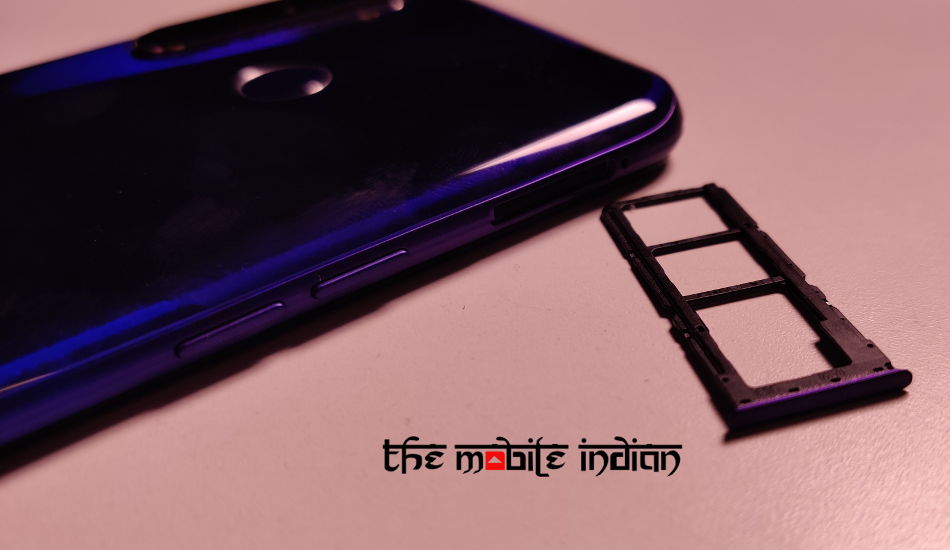 During our initial testing, we found the screen decent and the viewing angles are also fine. The display has good brightness and the colours are punchy, although reading in direct sunlight is an issue. We need to see how well the phone will perform during our review period. 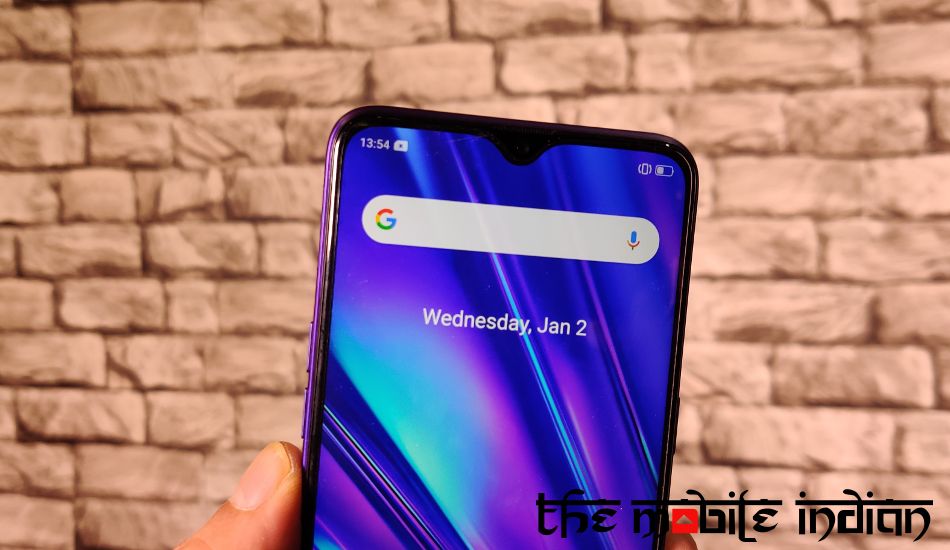 The Snapdragon 712 chipset is built on a 10nm process and it features six Kryo 360 high-efficiency cores operating at 1.7 GHz along with two high-performance Kryo 360 operating at 2.3 GHz. The performance of the smartphone is likely to be quite satisfactory as initially we did not find any issue opening apps. However, we will present an in-depth analysis of this new smartphone pretty soon.

On the software front, the phone is loaded with ColorOS 6.0, which is based on Android 9.0 Pie. The phone comes with some preloaded third-party apps like Opera News, UC Browser, Amazon Shopping, Paytm and more, all of which loaded fairly quickly. Thankfully all the preloaded apps can be uninstalled as per user requirement. The app drawer is also now enabled by default in this new Realme smartphone. Besides, there are also company-owned applications like music, video, phone manager, game space, game center and more. We will be discussing the user interface thoroughly in our review, so keep a tab on this space.

Realme 5 Pro: Things you should know!

The camera user interface has different options like Portrait, Photo, Video, nightscape, panorama, Expert, Time-Lapse, Slo-mo and ultra macro. During our brief testing period, we found out that camera output was quite average as the photos lacked detailing. However, we are yet to test the camera in different lighting conditions. Stay tuned with us for a detailed review later.

The Realme 5 Pro is backed by a 4035mAh battery with VOOC 3.0 fast charging which juices up the phone at 5V/4A. The battery will easily give you 1 day of backup. On the connectivity front, the phone features a 4G VoLTE, Bluetooth 5.0, GPS, GLONASS, Type C port and dual-SIM support. The phone measures 157 x 74.2 x 8.9mm and weighs 184 grams. As for the sensors are concerned, it comes with proximity, gravity, gyro, accelerometer and light sensors.

Realme 5 Pro surely comes with an interesting design language with Diamond cut finish at the back panel. The Quad camera setup at this price range certainly add some brownies. As for the competition is concerned, at Rs starting price, it is going to compete with the likes of Redmi Note 7 Pro. Stay tuned for our detailed review.