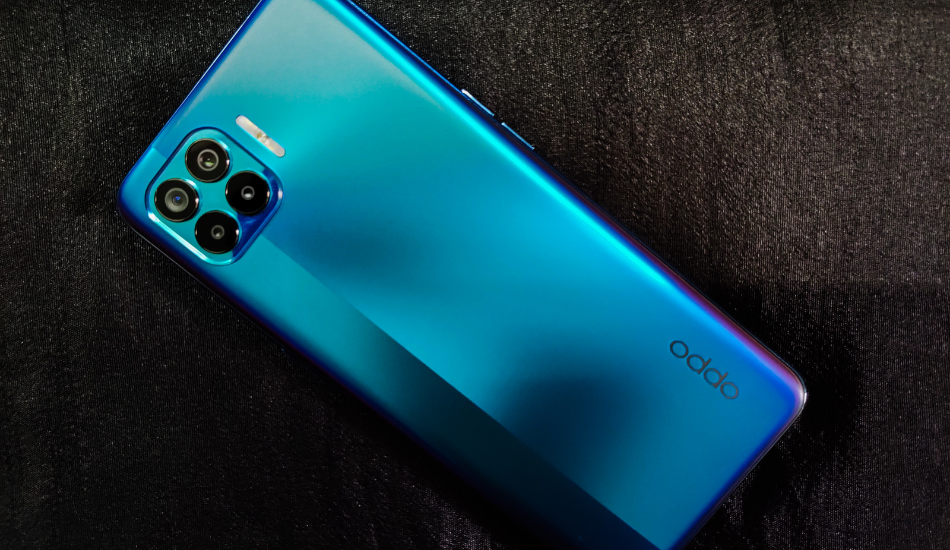 Oppo released a new device a few days back and we went hands-on with it. Take a look at our thoughts about the device as we review it in deep. 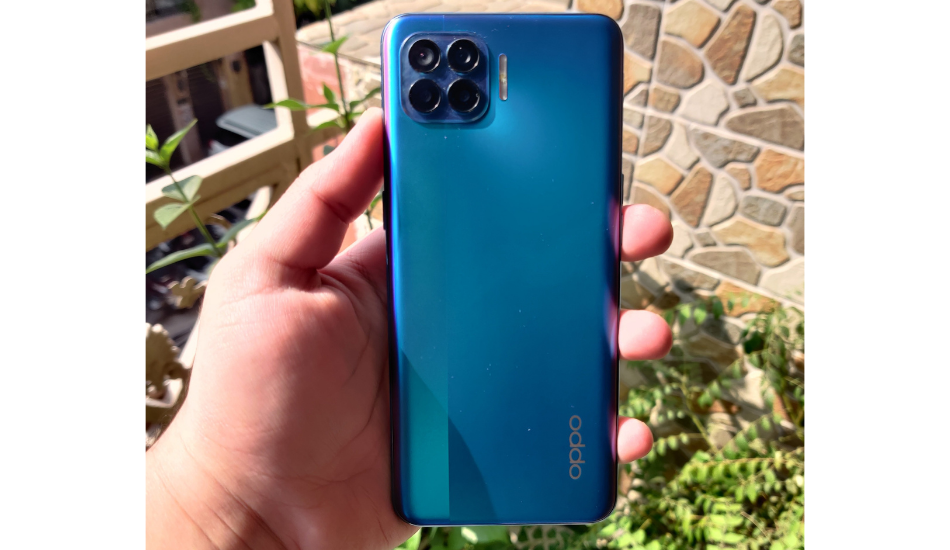 Oppo F17 Pro has a great design to be honest. The phone is super slim and easy to hold. Even though the back panel is made of plastic, it has a matte finish which really gives it a premium look and feel. I felt that the power and volume buttons felt a bit flimsy, at least on the review unit we got. They weren’t tight enough and didn’t give the exact feel I looked forward to. The four cameras on the back might remind you of iPhone 11 Pro Max, but there’s very little space between the camera lenses which makes it dust prone. Even though it’s a matte finish panel, it is a fingerprint magnet. Down below, there’s a 3.5mm headphone jack, Type-C port for charging, a speaker and a mic. There’s only a single speaker at the bottom which sounds really bad. It sounds really tinny and muffled, though it’s loud enough. We also get earphones in the box which is a nice addition. 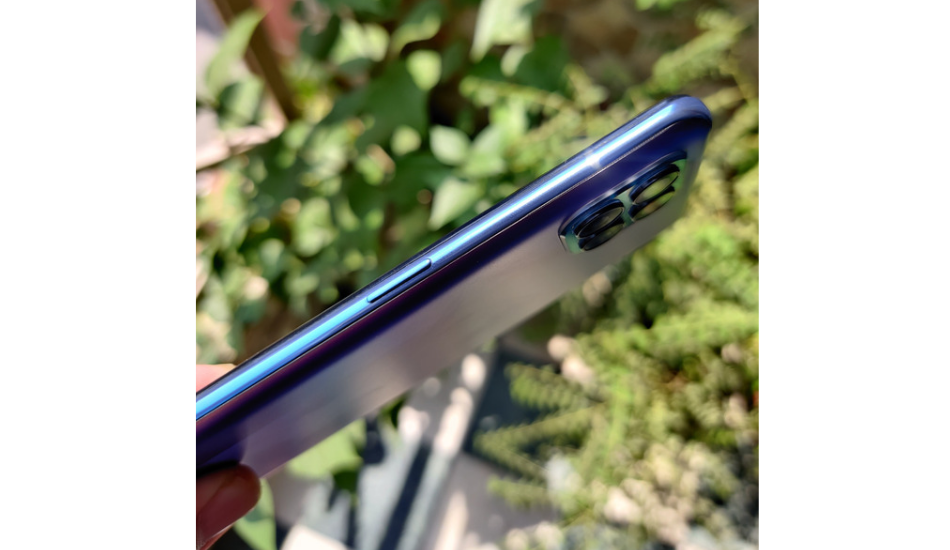 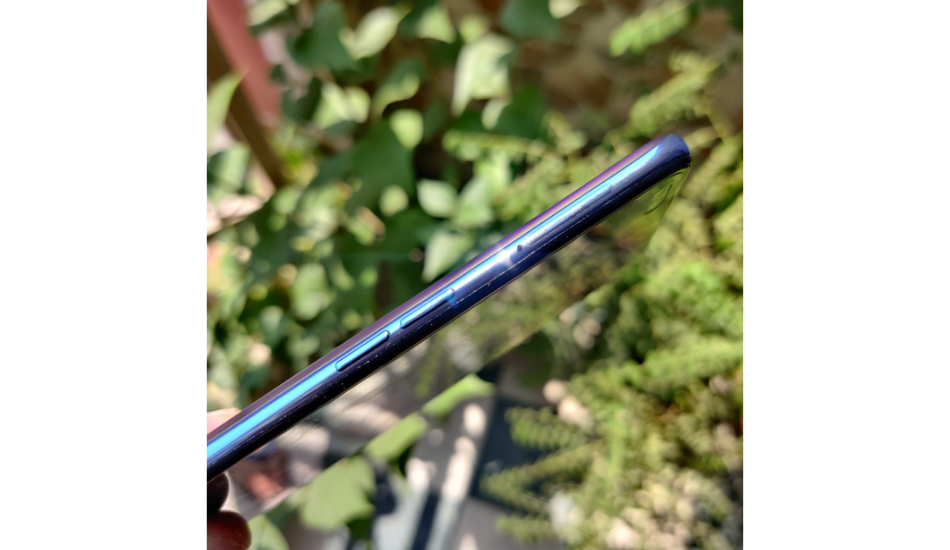 The Oppo F17 Pro has a 6.4-inch IPS Super AMOLED display with a resolution of 1080 × 2040. The display on this phone is really good. The colours were very accurate and vivid. Thanks to the AMOLED display, the blacks were really black. The text and all the elements on the display looked sharp. And there’s also an Always-on display feature, which has various styles among which you can pick your favourite. The viewing angles were good but it does give you a rainbow effect while looking through certain angles. What I think is missing in this display is a 90Hz refresh rate. At this price point, Oppo should have definitely offered a 90Hz display considering its competitors like RealMe are offering the same under the Rs 20,000 mark.

The device is powered by the MediaTek Helio P95 coupled with 8GB of RAM and 128GB of Storage which is expandable too. Out of the box, you’ll have around 114GB available out of 128GB. The rest is taken up by Oppo’s ColorOS and various Google Apps. The device does have bloatware apps and Opp’s own apps like Soloop, music player, Oppo Lab, Oppo Relax, etc. The sad part is, you cannot uninstall or disable these apps except Soloop.

The device runs on ColorOS 7.2 which is based on Android 10 and performance, for the most part, was above average. The app launches were fast, RAM management is great and I didn’t notice any unnecessary loading while switching between apps. What I did notice was a bit of lag throughout the system. The animations did become a bit choppy when I tried to switch through apps very fast. These are some issues which can be easily fixed with a software update. ColorOS is feature-packed. From App Cloner to Game Space, everything is present. Face Unlock is also present which is fast and recognised my face without any issues. The fingerprint scanner which is present under the display didn’t have any issues in recognizing my fingerprint. Though, I did feel it was a bit slow while unlocking. 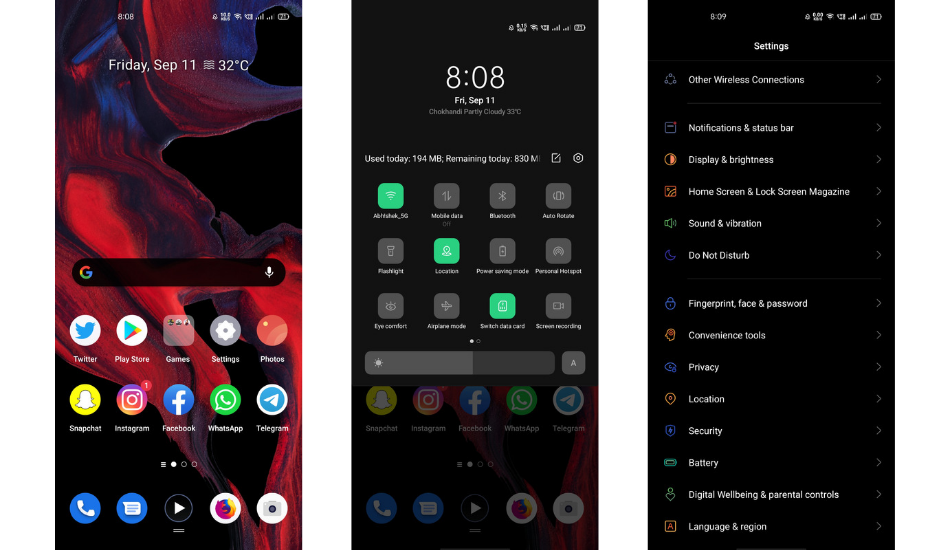 Talking about gaming, if you are a heavy gamer, you might be disappointed with the device. The first game I tried was Asphalt 9 on which I set the graphics quality to highest. The game was barely playable at high graphic settings. The frame drops were major and device lagged like anything. Responsiveness of the device to my commands also wasn’t good. But when I switched to default graphics quality, it performed well but with slight frame drops.

Surprisingly, the device performed well when I ran Call Of Duty: Mobile on maximum frame rate and graphics setting. There were minor frame drops though when a lot of action was happening on the screen, but for the most part, the device was responsive and handled the game well.

The device did become warm while gaming but I won’t consider it hot.

One more thing I would like to point out is the vibration motor. It is just a normal vibration motor which rattles like other mid-range devices and isn’t any better than others.

The Oppo F17 Pro comes with 4 rear cameras which includes a primary 48-megapixel camera, an 8-megapixel ultra-wide-angle camera, a 2-megapixel portrait camera, and a 2-megapixel monochrome camera. The shots we took from the phone turned out to be good when given enough light. The pictures clicked in broad daylight were good and looked sharp and the colours were really good and the dynamic range was great. But when switched to the wide-angle lens, the colours started to fade out very slightly and the photos got a bit softer and there was a noticeable fish-eye effect when using the wide-angle sensor. Also, the pictures came out to be noisy while using the wide-angle in artificial lighting. There was no shutter lag and taking pictures was a quick experience. 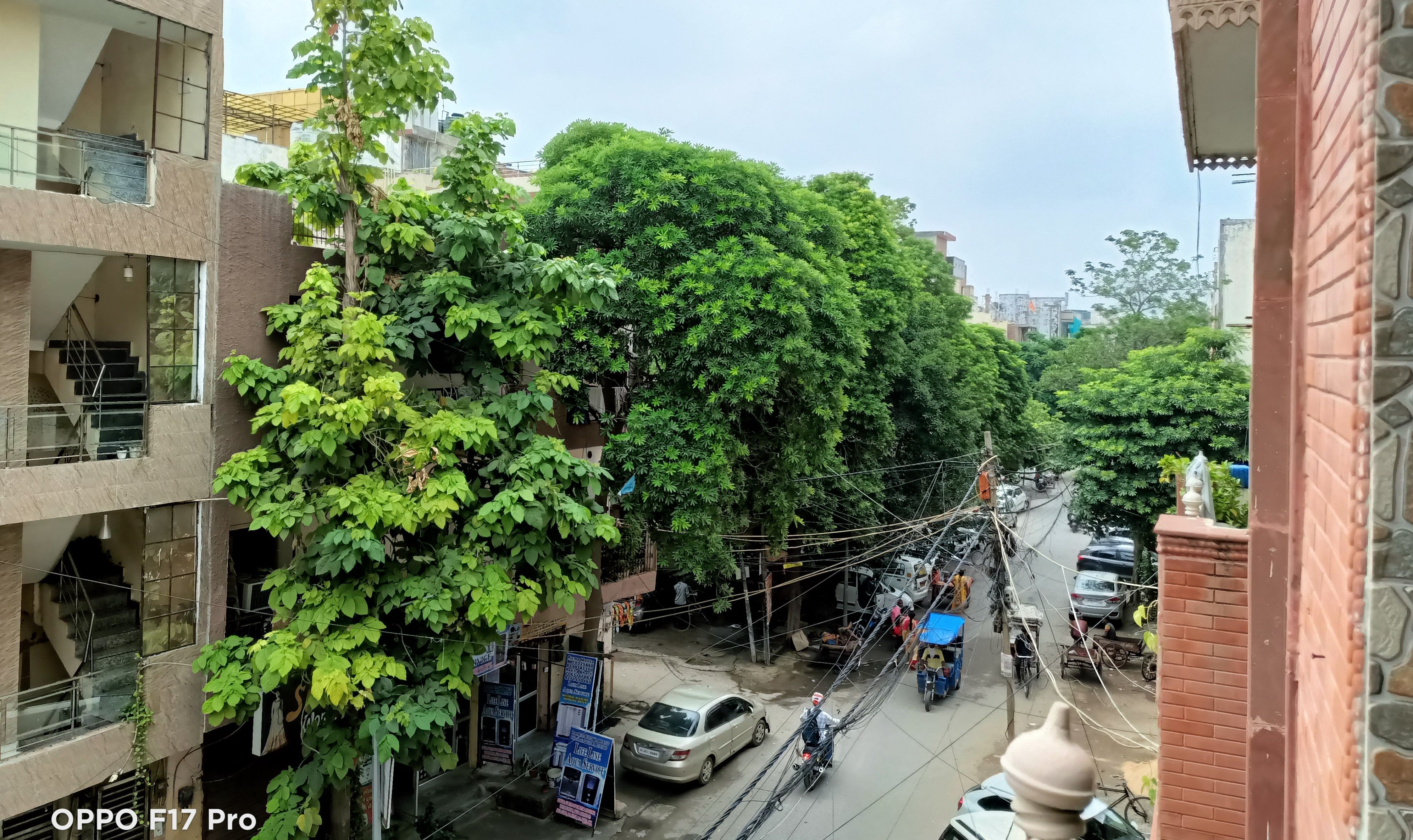 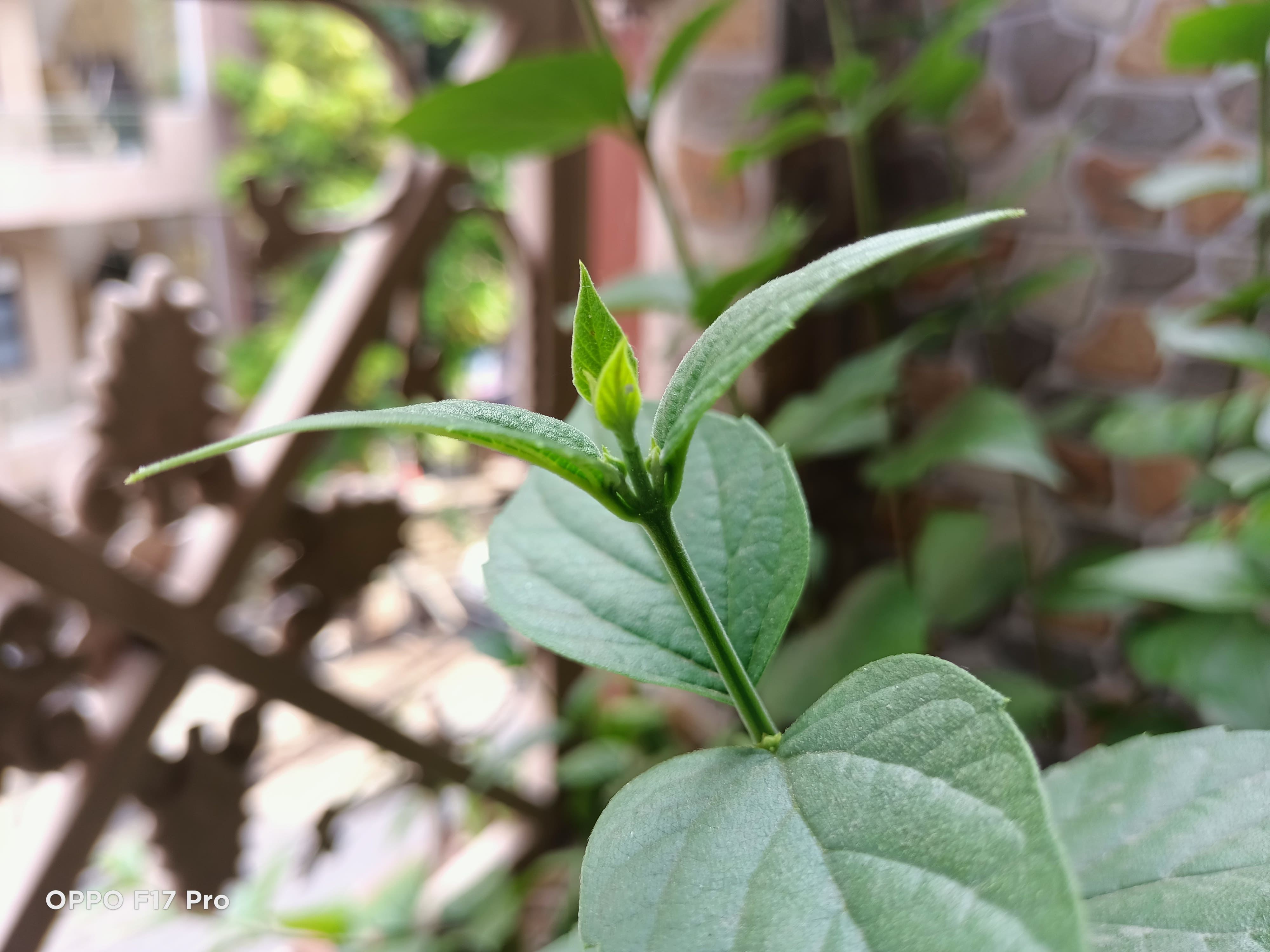 You can shoot videos in 720p, 1080p and 4K all at 30fps. Again, indoor videos were average but outdoor videos had accurate colours. You also have an option for live bokeh effect while shooting videos which works fine. Software-based stabilization is also present.

Coming to indoor shots in artificial lighting, the pictures turned out to be average. The sharpness in the images was missing and pictures looked soft. But the overall colours remained intact. 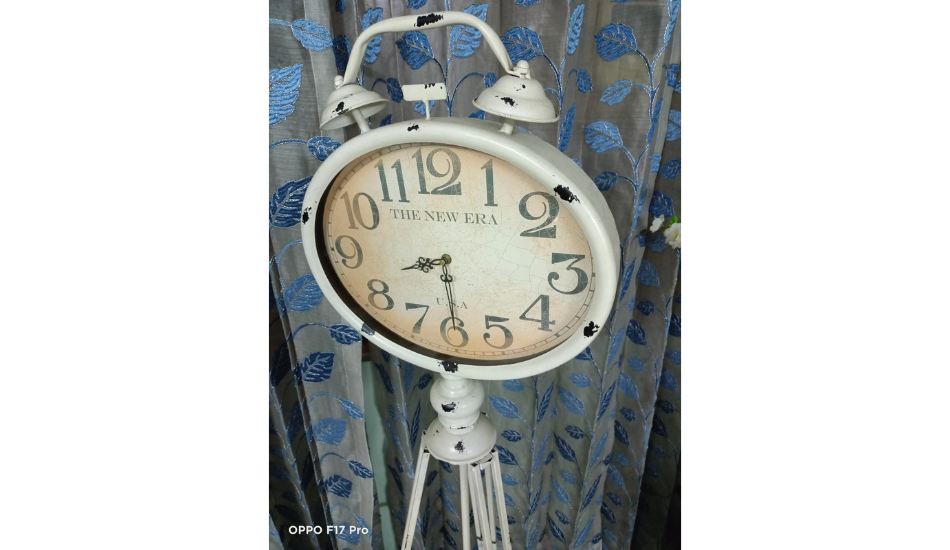 The AI Scene Detection feature can also help you get a great picture, where it just over-saturates the colours of the original image. This can be useful in some cases like when taking pictures of a landscape and the sky gets bluer, but not with indoor shots. It did fail to identify the scene once when I was taking the picture of a clock, but it identified the clock as ‘Food’.

Coming to the front camera, the selfies turned out to be good. The pictures were over-exposed and soft in some cases but were good enough. The colours looked natural. The secondary front camera comes into use when you take portrait selfie shots, and in my opinion, it does its work well. The edge detection in selfies was great, all thanks to the 2MP depth sensor. When taking selfies in artificial lighting/indoors, the colours fade out and overall quality drops severely.

The edge detection even in the pictures taken from the rear camera was good.

When you switch to the front camera for the first time, beauty mode will be turned ON by default which really messes up things. It softens the photo excessively and adds a lot of ‘White’ to the photos. The first thing you might want to do is turn it off which I did too.

Coming to the battery, the Oppo F17 Pro is backed by a 4000mAh battery that supports VOOC 4.0 30W fast charging. And let me tell you, the battery backup of this phone is one of its major strengths. I was easily able to squeeze out 5.5 to 6 hours of screen-on time with around 15 to 15.5 hours of total usage (including 6-7 hours of standby time where the battery drain was just 2%). And about 30-40 minutes of gaming is included in this total time where I played Call Of Duty Mobile on high graphics and Asphalt 9 on medium graphics. 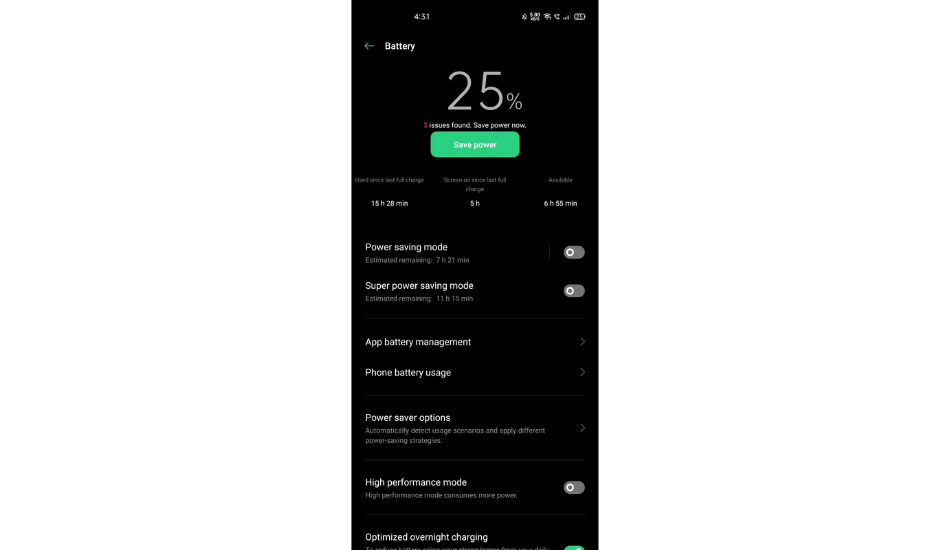 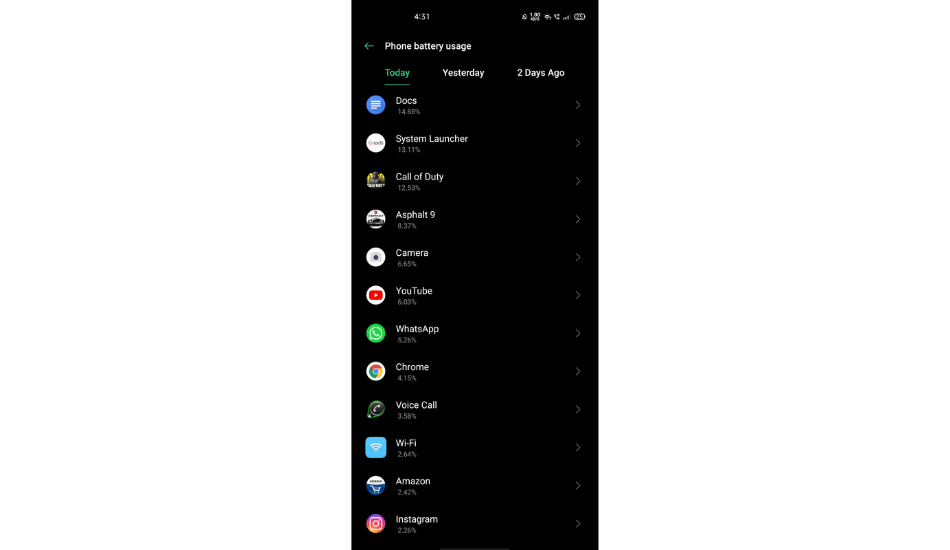 On a day where I didn’t game at all and most of the time was browsing, watching YouTube, writing some articles, etc, I was easily able to get 6 to 7 hours of screen-on time with the same amount of standby time.

When I put it to charge, the phone went from 25% to 100% in about 50 minutes which is insanely fast. The phone did warm up a bit while charging but never got hot.

Oppo F 17 Pro has more ticks than crosses. The design is super sleek and light, easy to hold and feels premium. The Display is super crisp with good colours and viewing angles. Though, a 90Hz refresh rate feels missing. Day to day performance is great and feels snappy. The cameras offer great photos in daylight but tend to struggle a bit in low light. The battery is good with fast charging that could charge your phone in about an hour. At a price of Rs 22990, the device is retailing on Flipkart. You should skip this phone only if you are a gamer and will do heavy gaming because the device does struggle to cope up while gaming at high graphics, but if you are in the market looking for a good overall package with good cameras, software and design, the Oppo F17 Pro is made for you.