The Nothing Ear (stick) is the third product from the UK-based brand. Does it have what it takes to compete with the alternatives? 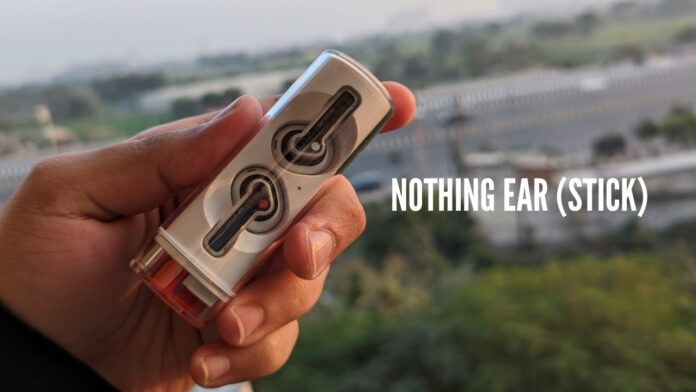 Making a name for yourself in today’s tech industry, especially if you are a new entrant, is a difficult path to tread on. Ex Co-founder of OnePlus thinks he can do it with his own brand Nothing that is nearly more than a year old and has three products under its name. Today we are going to talk about its third product, the Nothing Ear (stick), which seems to be an inferior product in comparison to Nothing’s first product, the ear (1).

As much as Nothing claims that the ear (stick) is a completely different product than ear (1), I think it is a nerfed version of the latter. Despite being inferior, can the ear (stick) justify the price tag of Rs 8,499 which is the same at which ear (1) was being sold? Let’s have a look.

Nothing wants to make its products look distinct in the market with a unique transparent design language. The play with design seems to be working for the brand as this type of design is consistent amongst all of its three products so far which is actually good.

The design of the earbuds of ear (stick) largely look the same as Nothing Ear (1), except for the silicone ear tips which have been replaced by plastic ones, making them half in-ear buds. The ear (1) was one of the most comfortable pairs of earbuds I ever wore as they had an in-ear design and the ear (stick) is quite literally the opposite.

The plastic ear tips are not made for my ear at least, and I often had difficulty wearing them in a proper manner. The earbuds often became loose, and I always felt like they were on the verge of falling out. I had to press them in while walking, let alone running. This also resulted in a lot of outside noise entering my ear due to which I always had to keep the volume near maximum levels.

While I was comfortable wearing them for longer periods when stationery, they aren’t the best ones to wear while working out or while doing some other activity with high body movements. Further, the buds are IP54 rated which means they should ideally withstand splashes of water and some dirt.

Coming to the case, this is where Nothing made a major change and shifted to a circular shape from a rectangular one. Moreover, the twisting mechanism to bring out the earbuds is actually very unique and cool.

The case can be twisted either clockwise or counter clockwise to open it. When it is closed, the Nothing branding on the opposite side is exposed to the touch. The case seems like a strong one and can withstand falls.

Apart from that, there’s a USB-C port on the right side alongside a button to reset the earbuds and get them into pairing mode. However, the case doesn’t have wireless charging, which is a bummer, considering we know Nothing can do it in this price range as it did with the ear (1). All in all, I feel this is an intelligent design for the case and is a step in the right direction in terms of innovation.

The Nothing Ear (stick) has 12.6mm dynamic drivers and supports AAC and SBC codecs. You get in-ear detection, Google Fast Pair and Microsoft Swift Pair support as well. Apart from that, the ear (stick) lacks active noise cancellation but does have clear voice technology for calls, thanks to its three-mic system.

Talking of audio quality, the Nothing ear (stick) seems to borrow it from its elder brother, the ear (1), except for less bass due to the design of the buds. The ear (stick) has decent instrument separation, and you can hear the vocals clearly.

The sound arc falls to the treble side with decent mids and highs. However, as there’s a good amount of sound leakage, the bass is on the flatter side. In other words, if you are a bass lover, you may not like the sound of the ear (stick). There’s so much sound leakage that I was comfortable listening to these, even at close to maximum volume levels.

Next, the company says that the engineers built a software algorithm named “bass lock” that detects how much bass is being sacrificed because of the shape of the ear and adjusts EQ accordingly. However, all of this sounds more gimmicky than practical.

The three-mic system on the ear (stick) does a pretty good job of throwing my voice to the other end. It picks up my voice really clearly, and the other end never complained of any disturbance. The mics do pick up background noise as well, but not to an extent where it can severely interfere with the call.

The Nothing ear (stick) comes with a good set of features, and it also includes touch controls. The touch controls are not like they were on the ear (1) but are totally different.

You can pinch on the stem once to play/pause, pinch twice to forward the track and pinch thrice to go back to the previous song. You can pinch and hold on the left earbud to lower the volume and do the same on the right bud to increase the volume.

There’s also an extra control called pinch twice and hold, which can be assigned to trigger the action of your choice. These controls worked well and also gave sound feedback when they were triggered.

The companion app for the ear (stick), called Nothing X, also has a really intuitive design. With all the animations and customisation, it is one of the best companion apps for earbuds I have seen, available both on iOS and Android. Further, Nothing now also allows you to customize the EQ via the app, which was a complaint I had with the ear (1) as they lacked this feature.

You can update the earbuds firmware via the app, customize the touch controls, and also enable a low-latency mode for better audio and video sync while gaming.

Coming to battery life, the ear (stick) is claimed to give 7 hours of playtime on a single charge and up to 29 hours with the case. These numbers seemed accurate during my usage of the ear (stick). However, at higher volumes and while calling, the battery life could decrease.