Here's the review for the Jabra Elite 85t TWS earbuds that are acting as AirPods competitors, but for Android. 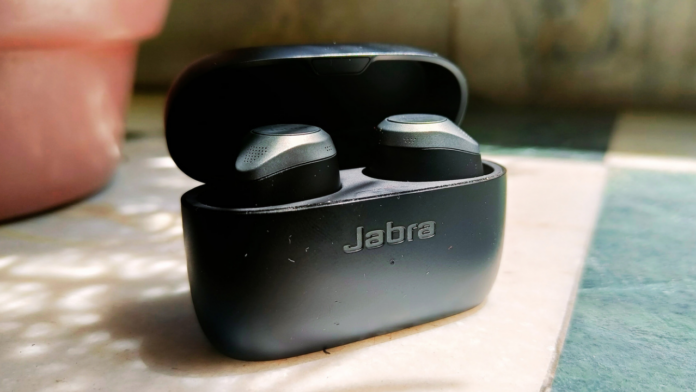 Truly Wireless Earphones have certainly made life easier for us audiophiles when it comes to decent audio quality along with being hassle-free. Now, these TWS earbuds come in various shapes, sizes, and most importantly, prices. The latest one from Jabra which has an ‘almost’ circular shape and are priced at Rs 17,999, is the Jabra Elite 85t. Jabra has always specialized in audio equipment and as a spoiler, the brand doesn’t disappoint with its TWS as well.

The design of the Jabra Elite 85t is nothing unique but is very small. It doesn’t have a stem, making it a little difficult to hold in hand, but once in-ear, it doesn’t even feel like you are wearing them. They fit very comfortably in the ear. Jabra has even equipped the buds with pressure relief vents, preventing pressure build-up inside the ear.

There’s a single button on each bud for controlling the tracks, volume (only during calls) as well as triggering the assistant. There’s a small light as well on each of the earbuds. However, I feel touch controls would have been much better. This is because to press the button, the earbuds have to be pushed inside your ear which gets uncomfortable at times.

The earbuds are IPX4 rated as well for water resistance. The case has the Jabra branding on the front with a cover-up top that opens smoothly. On the back, there’s a Type-C port for charging the case.

The case even supports Qi wireless charging so you can just place it on a charging pad for charging the earbuds. In addition, below the Jabra branding, you get a small light for telling you the charging capacity of the case.

The Jabra Elite 85t has 12mm drivers for audio and Bluetooth 5.1 for wireless connection. The earbuds support both SBC and AAC codecs along with adjustable ANC and HearThrougg functionality via a 6-mic system. Out of these 6 mics, each earbud has three of them. Further, there’s Wind noise protection, which worked very well during our testing of the Elite 85t.

The TWS earbuds even feature multi-device connectivity so you can connect two devices simultaneously and switch between them. Now, talking about the audio quality, it’s one of the best I have heard in a while when it comes to TWS. The sound is full and balances all the tones very nicely.

The soundstage is pretty good and the Elite 85t maintains the bass, the mids and the highs in a very balanced manner. You literally get to hear every beat with pop songs. The mids were detailed and controlled, while the highs were accurate as well. Songs with more bass again sound very well, and it would be a treat for bass lovers.

Furthermore, using the Sound+ app, you can adjust the equalizer settings to tune the audio to your liking. For example, I like the V-shaped equalizer setting more, and they worked very well with the Jabra Elite 85t.

You can set various presets and modes for the Elite 85t so you can quickly switch to the desired preset you have set for a particular situation, like when you are commuting or when you are working out. The app works pretty well with the Buds and has one of the easiest User Interfaces that one can use. Continuing further, the earbud also has auto play/pause and auto power on/off features.

Call Quality was as expected, crisp and clear on both ends. The other person could hear me clear without much background noise. I could hear them without any issues as well.

The charging time for the case stands at about 3 hours, from empty to full. The case can charge the earphones about 3-4 times if you use them with ANC. With ANC Off, the time increases again. As the buds support fast charging, you can charge them for about 15 minutes for an hour of usage.

Jabra has employed its dedicated ANC chip inside the buds to attain ‘Advanced ANC’ performance. Out of the three mics, each earbud uses two mics to achieve ANC and cancel outside noises.

And during my review of these earbuds, the buds showed me what Active Noise Cancellation really means. It does cancel out a considerable amount of noise, including people talking around you, engine noise, fan noise and more.

To compare, I had the latest Nothing earbuds with me. I know those earbuds cost a lot less, and there’s an obvious choice here in choosing which one does a better job. But during the comparison, I could really figure out how effective the Jabra Elite 85t are at reducing the sounds and noises around you. The Wind Protection algorithm also works without any issues and does an effective job.

The HearThrough mode does the opposite of what ANC does and amplifies the ambient noises. This mode also worked nicely with the voices of people being clear and sounding more natural. You can press the button on the left earbud to use HearThrough or Noise Cancelling. The app can also be used to cycle through these modes.