iPad Mini 6 was launched back in October this year and we have our thoughts after 2 months of usage. 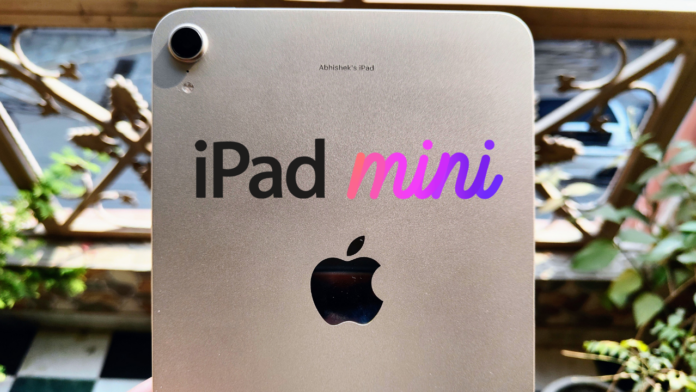 Touch ID can be hit and miss, Minor software characteristics

After 2019, for the first time, Apple updated its iPad Mini lineup with the iPad Mini 6.

The iPad Mini 6 launched in September, and the first sale was held in October. I pre-ordered the 256GB Wi-Fi Only variant of the iPad Mini 6 and got it on October 8th. After two months of usage, I have some thoughts as it’s my first iPad and I bought the device for multiple reasons, including my work, which involves a lot of typing, watching videos, playing music, and more. So let’s talk about it.

Starting with the in-hand feel, it’s what I expected, and that’s premium. It picks up the flat sides that were reintroduced with iPhone 12 series and the iPad Air and the iPad Pro also had. It has an aluminium unibody with a flat rear, and since I bought the new ‘Starlight’ colour because it was newly introduced, I was happy I decided to buy it because it looks… fresh.

The touch ID on the front of the iPad Mini 5 has moved to the top, integrated with the power button, just as Apple did with the iPad Air 4. Unfortunately, the touch ID doesn’t work very well when it’s dirty or has moisture. I often have to clean it up to make it work. When it works, it’s swift to recognise my finger and unlock the iPad.

The volume buttons have been moved to the top because the iPad Mini 6 supports Apple Pencil 2 and space had to be created to attach it.

Unfortunately, the iPad Mini 6 does not support the Magic keyboard which is a bummer. But the support for Pencil 2 is appreciated as it does make for a great experience when using it for certain features.

Interestingly, the buttons also change as per the direction you are holding the iPad Mini in. Meaning if you are holding it in the landscape, the button that turns down the volume increases the volume, which is a neat feature. Apart from the buttons, there are four speaker grilles on both sides out of which only two have speakers behind them as it’s a stereo speaker setup and not a quad one. At first, it sounded a bit odd when listening to music because I knew there were four grilles but only two of them were working, but again, I got used to it.

Talking about speakers, these speakers are one of the best I have listened to on any tablet. They sound full with a good amount of bass and treble. There is a 12MP camera above the display that’s barely noticeable. However, it has a 14mm ultrawide-angle lens and support for the Center Stage feature as well. At the bottom, there’s a USB-C connector for charging the tablet and not a lightning port. Moving away from Lightning to USB-C makes the tablet much more portable as it’s now compatible with a host of more devices.

Coming to the front, the bezels on the front do look a bit thick even though they are the same size as on the iPad Air and Pro. It seems so because of a smaller form factor. However, I got used to it pretty quickly and it doesn’t look so odd now. The screen size has been increased to 8.3-inches from 7.9-inches on the previous model and is an IPS LCD Liquid Retina display with a resolution of 2266×1488 resolution at 326 pixels per inch (ppi).

The display looks very good under indoor conditions. It has a peak brightness of 500 nits and gets plenty bright. You may face difficulty reading and viewing it when directly under the sun but otherwise, it looks decent. The resolution looks good with crisp and clear text and photos. Viewing angles are decent at best with a slight purple-ish tint when looking at it from extreme top or bottom. The display also has an anti-reflective and oleophobic coating and supports True Tone as well.

The iPad Mini 6 is powered by Apple’s latest A15 Bionic chip with a 6‑core CPU, 5-core graphics and 16-core Neural Engine. As far as performance is concerned, this tablet is a powerhouse. It handles everything you throw at it with ease. Be it gaming or a CPU heavy task, the iPad Mini 6 just gets through it like a beast. There were no lags or anything as such and even gaming on the tablet was as fun as I had expected it to be.

A small problem though, was the aspect ratio of apps. As the iPad Mini 6 features a new screen resolution and aspect ratio, some of the apps whose developers still haven’t corrected their code appear with black bars on the sides making it look odd.

I faced the same issue with Netflix but fortunately, the company was quick to fix the issue with an update that was issued. But games such as Call Of Duty Mobile and Rocket League Sideswipe still show these bars on both sides, making the overall experience odd.

Apart from that, system apps such as Apple TV+, Settings, Mail, etc all work fine. The animations and transitions in iPadOS 15 are very smooth, and the rest of the software is filled with all the bells and whistles Apple loads its products with.

The notification center can be accessed from the top while Quick Settings can be accessed from top right. Facetime video and audio calls work well. The center stage feature works really nicely when calling with FaceTime. With the cellular model, you can use FaceTime from anywhere anytime.

With the wi-fi model though, you’ll need a hotspot from your smartphone if Wi-Fi isn’t available when you need it. I didn’t get the chance to test out SharePlay with Facetime as of yet but that should also work well. Features such as Live Text in photos, App privacy report, Hide my Email also work as intended without any issues. App Switcher and Split View make multi-tasking super easy without any lags. One of the features I loved the most was Quick Note where you can swipe from the bottom right to just take a note and then swipe it back.

Notification Summary is another feature that enables you to view all unimportant notifications at a single time set by you. Apple’s browser Safari also gets Tab Groups, making the browsing experience easy.

Typing experience was fun too but as the screen of the iPad Mini 6 is comparatively smaller than iPad Air or the Pro, the keyboard takes up slightly more than half of the display when in the landscape which might make things difficult for one. Other than that, typing and browsing on this tablet is as good as it can get on other iPads. Watching videos is much better on the iPad Mini 6 than watching them on an iPhone or any other device.

The iPad Mini 6 has a 19.3-watt-hour battery which is claimed to last up to 10 hours of surfing the web on Wi‑Fi or watching video and up to 9 hours on the Wi-Fi + Cellular model. The tablet can easily last 3-4 days with very light usage. The battery life can easily drop to a single day and even less than 10 hours with heavy usage.

To conclude, battery life is close to what Apple claims and not more. Standby battery life was also super as I only lost 1% in a span of 7-8 hours while the tablet was on standby. In addition, you get a 20W USB-C power brick with the iPad Mini 6 that can take up to 2 hours to charge the device.

The iPad Mini 6 has a total of two cameras including one on the front and one on the back. The rear has a 12MP Wide camera with f/1.8 aperture that has Smart HDR, auto image stabilisation, and a Quad-LED true tone flash. On the front, there’s a 12MP Ultra Wide front camera, 122° field of view, f/2.4 aperture, Smart HDR 3 support and 1080p HD video recording at 25 fps, 30 fps or 60 fps.

These cameras are a big bump from the last iPad Mini. The back camera isn’t the best but can be used to click photos if you don’t have your phone around. The photos are not the sharpest and have some noise when clicked under artificial lighting or low lighting. Under good lighting and outdoor conditions, pictures come out to be decent with good details and sharpness, but not as good as those coming out from iPhones or other flagships.

However, the front camera works quite well with both selfies and while video calling. The ultra-wide sensor helps to cover a lot of area when video calling. Moreover, it clicks selfies with a natural skin tone.

Load more
The iPad Mini 6 is a great purchase for its price and is a true all rounder. Be it performance, cameras, display or anything else, the iPad Mini 6 excels in almost every aspect. iPad Mini 6 two months later: Can it get any better?