Honor 8 Pro Review: A Pro in almost every department!

The Honor 8 Pro has all the power and capabilities that give all the premium flagship devices a good run for their money.

Huawei’s sub-brand Honor has come with a new flagship smartphone known as Honor 8 Pro. Priced at Rs 29,999, the smartphone will be available on Amazon starting from July 10 for Prime members and the open sale will commerce from July 13. Going by the specs and attetion to detail on this phone, it looks like we have a new ‘flagship killer’ in town.

The Honor 8 Pro has all the power and capabilities to go head to heas with the premium phones. So what shoud you as a consumer know, before you make your choice. Lets find out.

Honor has a legacy of making some premium-looking smartphones, and the Honor 8 Pro builds on that. Be it premium quality built or some sturdy look, the Honor 8 Pro delivers it. Though from the front the device looks similar to the Honor 8, it is the back panel that now sports a matte metal finish as opposed to the glass finish which we have seen on its predecessor. This makes it look more durable and less fragile as compared to its predecessor. We got the Blue colour unit for the review, which is certainly a head turner (many people complimented the device during our commutes). 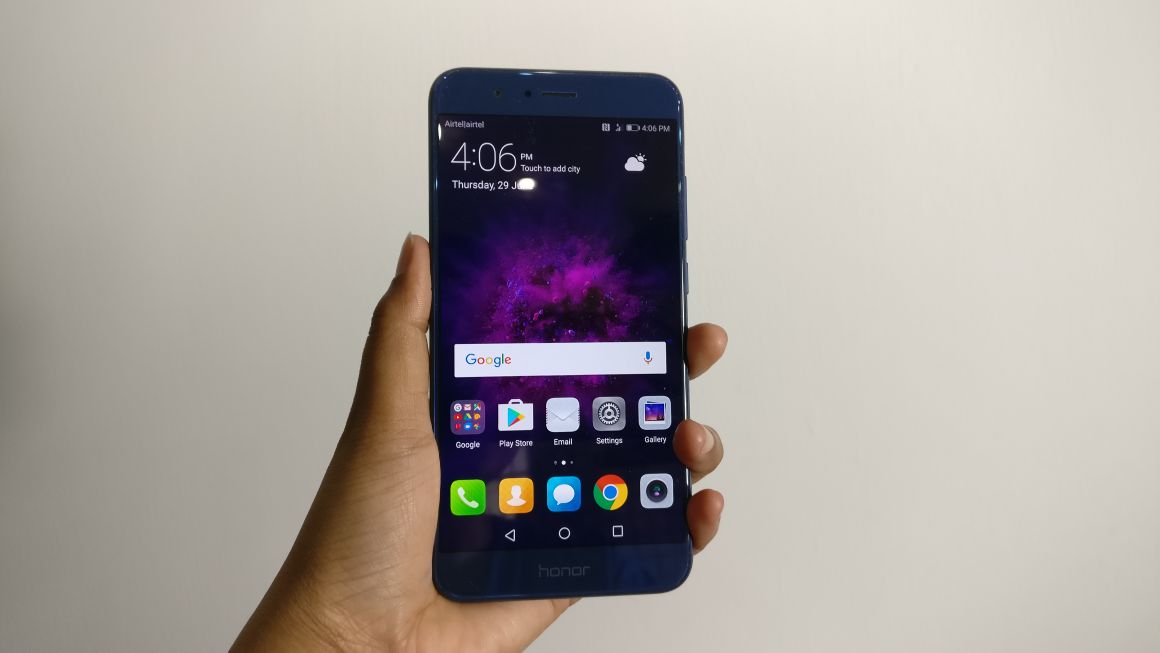 The smartphone is sleek at just 6.97mm thickness, which makes it slimmer than the OnePlus 5 (7.25mm thickness) and gives a distinct look (not like others, who are accused of secretly having a bite of Apple!). However, the smartphone weighs in at 184 grams, which is on the heavier side, and you can partly blame the 4000mAh battery for it. If that battery doesn’t compensate, then the front houses 5.7-inch screen with some minimal side bezels along with a front-facing camera, the usual array of sensors and earpiece atop, while at the base you have company’s logo. At the right, there are volume controls and power on/off button. We liked the fact that the brand has added some texture to the power button, which makes it easier to differentiate from the volume controls. The left houses the dual-SIM slot, while at the top, there is an IR blaster.

At the back, you will find a dual-camera setup at the top left corner of the device along with a dual LED flash, while the fingerprint sensor is placed at a top centre position, which is quite easy to reach. The fingerprint sensor is, indeed,fast and comes loaded with some nifty features (will talk more this later). At the base, you will find the headphone jack coupled with USB Type-C port and speaker grille. Overall, if you ask us, the smartphone surely gives a cool desirable look and is comfortable to hold, in spite of sporting a large screen. 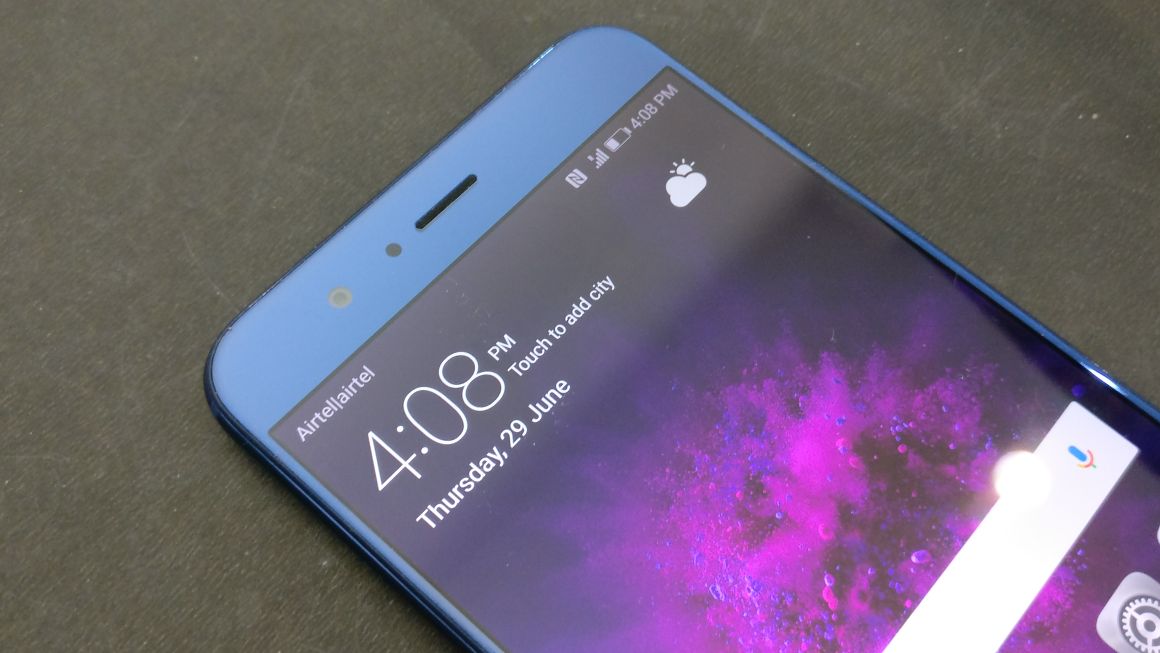 Talking about the display, the smartphone boasts a 5.7-inch QHD LTPS LCD panel with a screen resolution of 2560 x 1440 pixels and a pixel density of 515ppi. First of all, it is a welcome move that the brand has added a Quad HD display, which makes the screen super bright and it produces vivid colours. The blacks are deep enough, which is a welcome move. Whether it is watching movies or any other streaming content for that matter, it was a delightful experience. The colour temperature is adjustable, though the default settings work fine. Then there is an Eye Comfort Mode, which makes your eye less prone to blue light so that you can enjoy the late-night browsing. However, on the flipside side, the auto-brightness setting is rather slow to pick up. The device takes some time to adjust the brightness according to the surrounding, which can seem too long for its more hyperactive users.

Dual-camera does it magic!

Huawei was one of the early mover brands, which started the trend of dual-camera setup. And the latest offering has a similar implementation as we have seen in other Huawei and Honor devices. The camera comes with a combination of 12-megapixel sensors with one being used to capture RGB, while other captures details in monochrome. The smartphone also supports 4K recording at 30 frames per second and comes with an 8-megapixel front camera for selfies and video calling.

The camera is pretty much similar to what we have seen in the Honor 8 and Huawei P9, which is not a bad thing as both the smartphones came with some good camera performance. The smartphone can take some well-detailed shots when the lighting is perfect, and if you are shooting with the monochrome mode, the photos came out to be well detailed, and the contrast and dynamic range is quite impressive, though in some indoor shots we felt the camera is highlighting a bit more than usual. 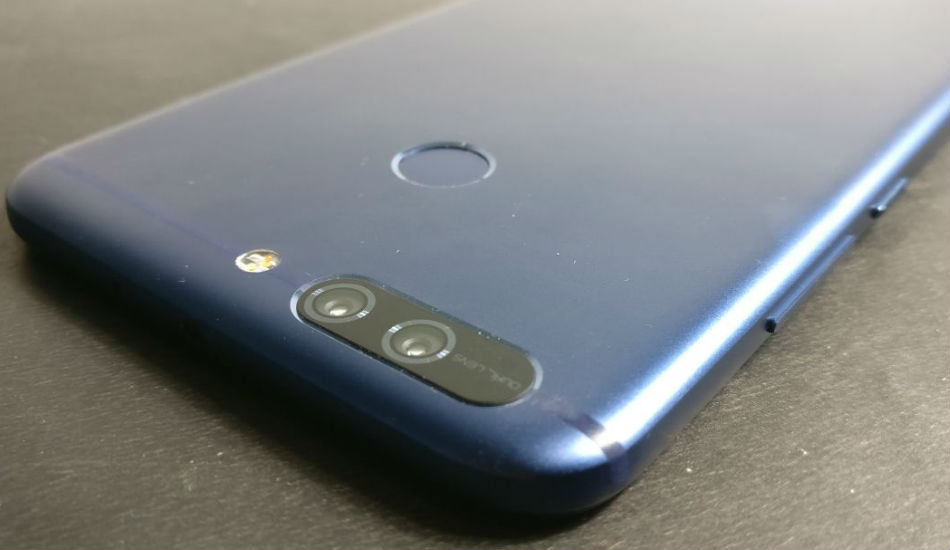 The dual-camera setup is used to improve the low-light performance of the device, as the monochrome sensor capture more light and the RGB captures a picture with colours. The camera, in post processing, uses the information from the monochrome photo to enhance the colour one. Though it might sound a little nerdy, the implementation is good. The photo took some good low-light shots, though in some photos noises were noticeable and the monochrome sensor once again managed to deliver some amazing output.

The camera also comes with a wide aperture mode, which lets you capture an image with different aperture settings. This helps in creating a bokeh effect to the photo. One can change the aperture according to their need afterwards as well. However, the effect has its share of hits and misses. To start with, the subject is sometimes not correctly highlighted, and in a situation which has a narrow depth of field, the output does not look ideal. 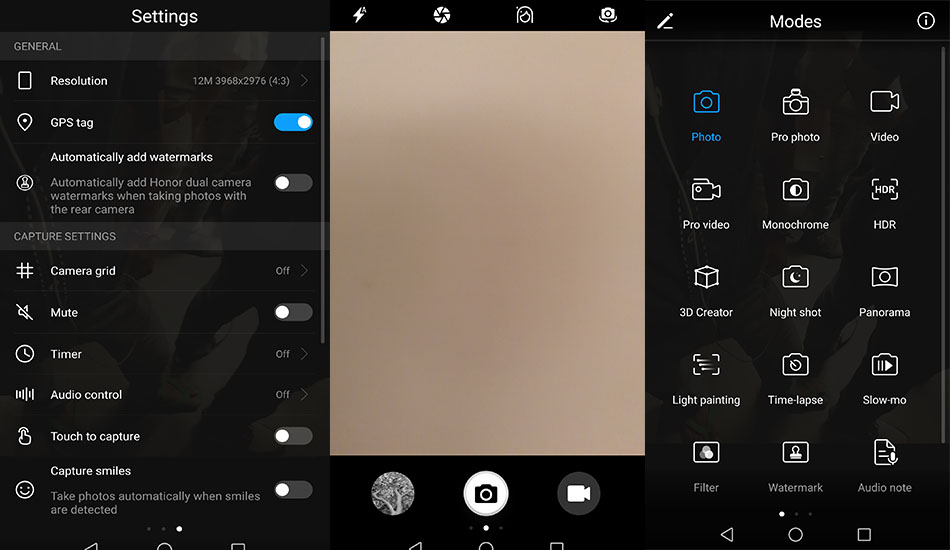 The camera UI is pretty clean and comes loaded with different modes including Pro, video, Pro video, Monochrome, HDR, 3D Creator, Night shot, Panorama, Light painting, Time lapse, slow-mo, filter, watermark and so on. These modes are fun to use, especially, the light painting, though you need to have a proper tripod to shoot the light trails. The front camera does a decent job in most of the lighting situations, though during low-light the image came out to be grainy. Overall, the camera performance is pretty good, and at least the brand has not tried to copy other’s features (you know, what we mean!).

The device is powered by company’s in-house Kirin 960 octa-core processor and is backed by a 6GB of RAM and 128GB of internal storage, which can be further expanded up to 128GB via microSD card slot. The phone is juiced by a 4000mAh battery and on the connectivity front, the smartphone support 4G, Wi-Fi 802.11 a/b/g/n/ac, Bluetooth 4.2, dual-SIM and an infrared sensor.

The Honor 8 Pro sports a similar processor which is found in Huawei P10 Plus and Huawei Mate 9 and the performance is comparable to Qualcomm’s top-of-the-line Snapdragon 835 processor. That said, the smartphone is fast to operate when it comes to daily tasks like browsing, streaming and so on. The phone handles most of the tasks you throw at it without breaking a sweat and you can thank a massive 6GB of RAM for that. 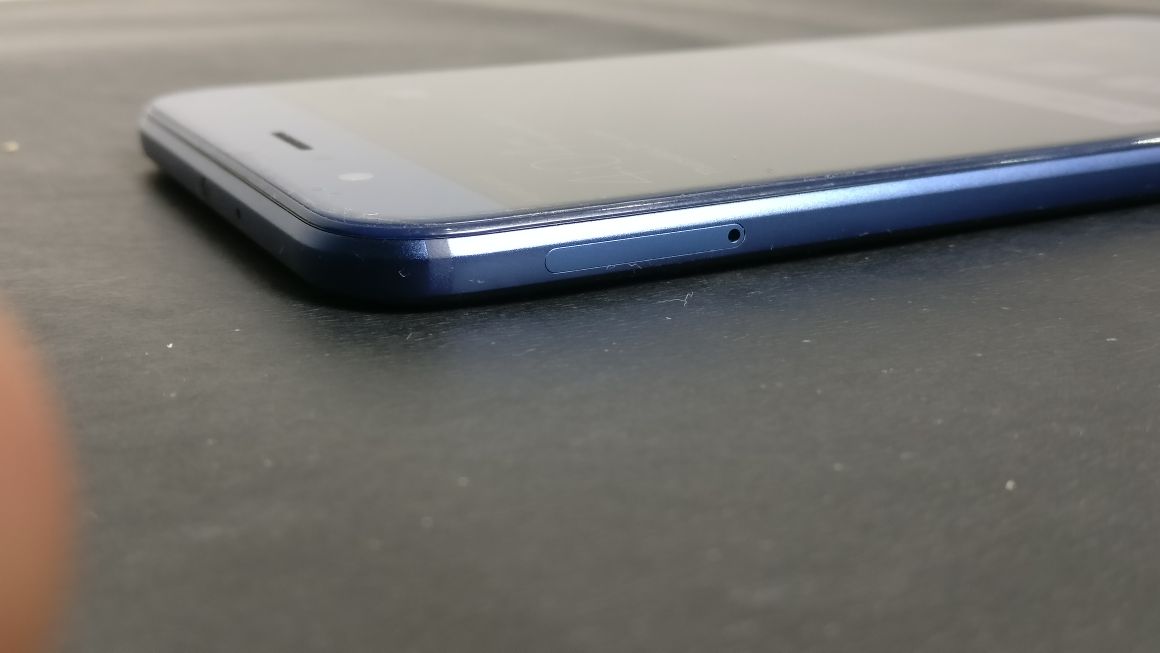 On the gaming front, the phone handles the casual games like Subway Surfers, Angry Birds and Temple Run 2 quite effectively and the graphic-intense games like Assassin’s Creed: Pirates, Injustice 2 and Asphalt 8: Airborne, ran smoothly without any noticeable lags or frame drops. However, one persistent issue we found in this device was of over-heating. This is particularly noticeable when you are using the camera app. During our review period, the device tends to heat up fast when we were, for example, recordings a video or clicking photos for some time. Also, while playing some high graphics games, the device tends to heat occasionally. But other than this, the smartphone is fast and smooth to operate.

The battery backup is pretty average. During our review period, the smartphone hardly lasts a day with normal use which includes calling, streaming net and using dual-SIM networks. But when you switch some gears, the battery depletes at a faster rate, and during power usage, which includes non-stop gaming and video playback, we found out the smartphone gives almost 4 to 5 hours of battery backup when it is charged approx 70 percent. 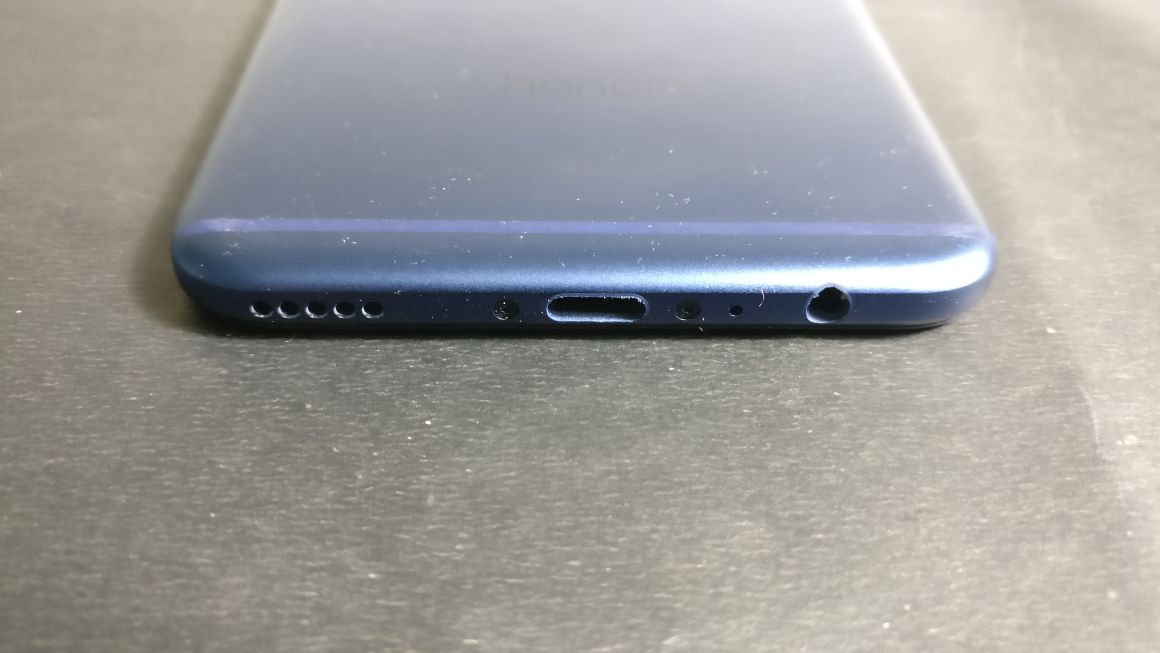 The phone takes around 2 hours and more to get fully charged. The average performance can be caused due to the higher display resolution. However, there some power modes to extend the battery backup, though minutely. The UI promptly asks to close the power hungry apps, which is a good thing, but we think the performance of the battery could have been better. Other than this, call connectivity is good, and we faced no major call drop or loss of quality during our review period. The speaker output is adequate, but don’t expect too much from it.

The Honor 8 Pro runs on Android Nougat with Huawei’s new EMUI 5.1 on top. The Emotion UI 5.1 is probably one of the best EMUI so far. The user interface is now lighter and faster as compared to previous versions. The user interface now comes with minimum bloatware, and we liked the fact that the company has given the option to choose between standard layout and an App drawer. A good move, indeed.

Navigating between the apps and screens is a delight, and it is quite smooth as well. One can also change the navigation keys according to their wish. Swiping from left to right will open a page shows app suggestions and news from Flipboard. One can also search for an app by swiping down from the home screen, which is a welcome move. 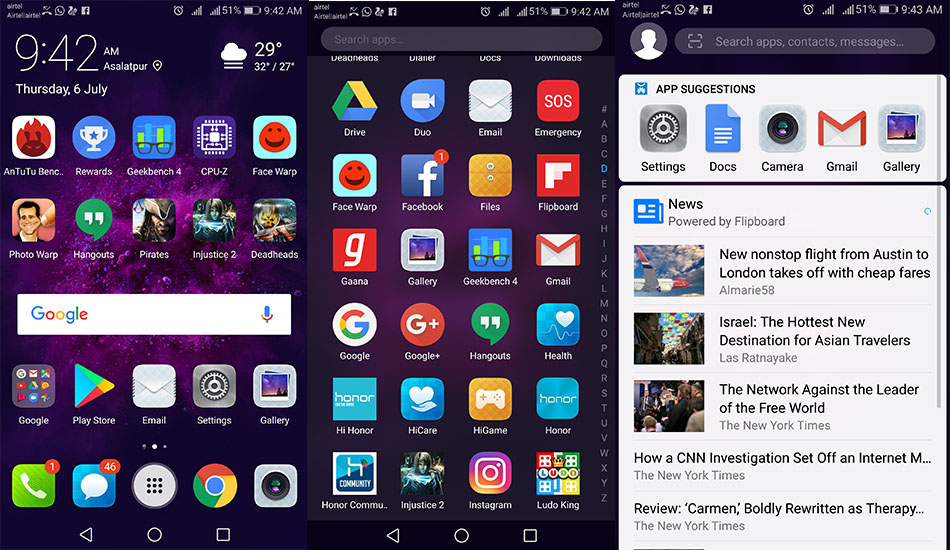 The company has also added a floating dock, which makes it easier to navigate, while the motion control brings lots of interesting features like flip to mute, pickup to lower ring volume. Then there are knuckle features through which one can different functions like draw O with a finger to take screenshots, draw a straight line on the display to enter into the split-screen mode. 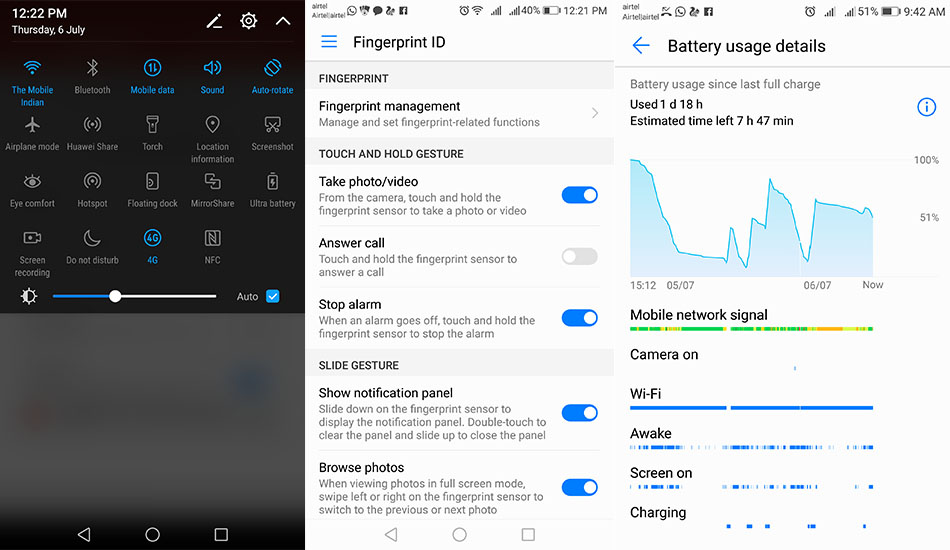 Then there is a Phone Manager app, which takes care of all the optimisation of your smartphone. Through the app, one can manage permissions of certain apps, scan for a virus (powered by Avast), setup app lock and more. The team behind EMUI 5.1 has added a host of new interesting features both on the foreground and at the background, which is well is reflected in the latest user interface. So, if you want to try a user interface different from stock Android, then EMUI 5.1 will not disappoint you.

To wrap up, the Honor 8 Pro is probably one of the best Honor devices so far. The device looks premium and distinctive enough for a mid-premium smartphone. The QHD display offers some really good output, though the auto-brightness could a pain for some. The dual-camera setup works well and the EMUI 5.1 has been improved. Overall, the smartphone has all the ingredients to give the flagship killer a run for its money.