Gionee A1 Plus review: A masterstroke or a failed attempt?

Priced at Rs 26,999, the smartphone comes loaded with a massive 6-inch screen coupled with dual rear cameras and a large 4550mAh battery. But will it be enough to give stiff competition to its arch rivals? Let’s find out.

Bulky and heavy in nature Camera could have been better User Interface needs optimisation
Gionee is, indeed, one of the first Chinese brands that entered the Indian smartphone market, and banked heavily on the retail segment. However, with the advent of other Chinese players, we saw Gionee going a step behind. However, with the launch of its latest Gionee A1 Plus, the company is ready to take a head-to-head competition with other offline players like Oppo, Vivo and Samsung.
Priced at Rs 26,999, the smartphone comes loaded with a massive 6-inch screen coupled with dual rear cameras and a large 4550mAh battery. The specifications look promising and the 20-megapixel selfie camera is interesting. But will it be enough to give stiff competition to its arch rivals? Let’s find out.
Sturdy yet a bit bulky design, big display
The Gionee A1 Plus is carved out from the same skin which the A1 was made. This simply means that both of the devices look identical from the front minus the large screen in A1 Plus. Coming to the large screen, it can be a bit uncomfortable to operate for some people. The device is quite thick with 9.1 mm thickness and it does feel heavy with 226 grams. When you compare Xiaomi Mi Max 2 and Gionee A1 Plus, the former turns out be sleeker and lightweight as compared to latter in spite of sporting a much bigger screen (6.44-inch) and battery (5300mAh). It is also priced Rs 10,000 less than the latter. 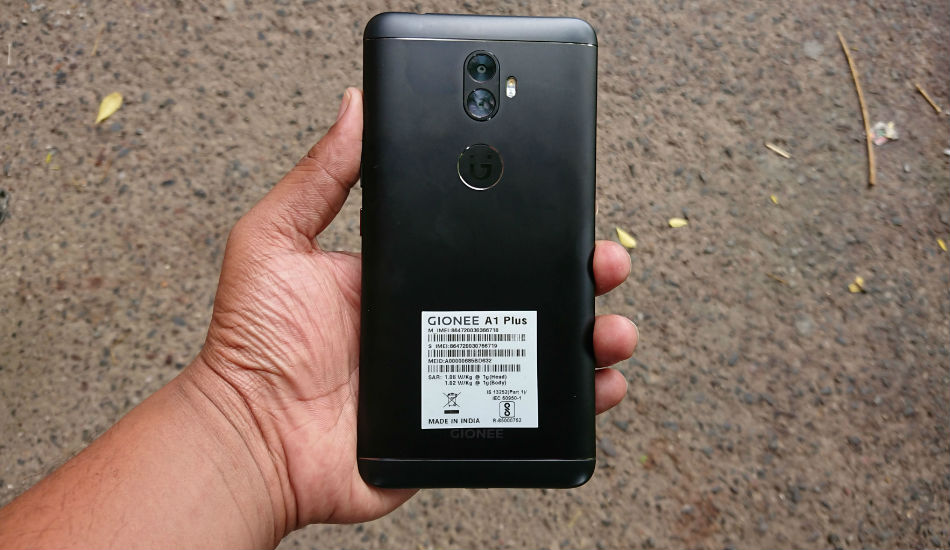 The front sports a large 6-inch display with some minimum side bezels, while at the top you will see a front-facing camera which is accompanied by an earpiece and usual array of sensors. At the base, there is a home button, which also acts as fingerprint sensor flanked between a recent menu and back buttons. The buttons can be changed in the Setting menu. The right houses volume controls and power on/off button and we liked the fact that the power button has a red outline to distinguish it from volume controls. Moving on, at the left side, one will find a dual-SIM slot, while at the top there is a headphone jack. At the bottom of the device, there is a micro USB port flanked between two speaker grilles.
Moving to the rear panel, one can see a vertically aligned dual-camera setup along with dual-tone LED flash at the top-centre position and just right beneath it is company’s logo, which some might confuse with a fingerprint sensor. The silver-coloured antenna lines run across the top and bottom of the device. Overall, the smartphone does look sturdy, but it is quite heavy and a bit bulky, which makes it difficult to operate sometimes. 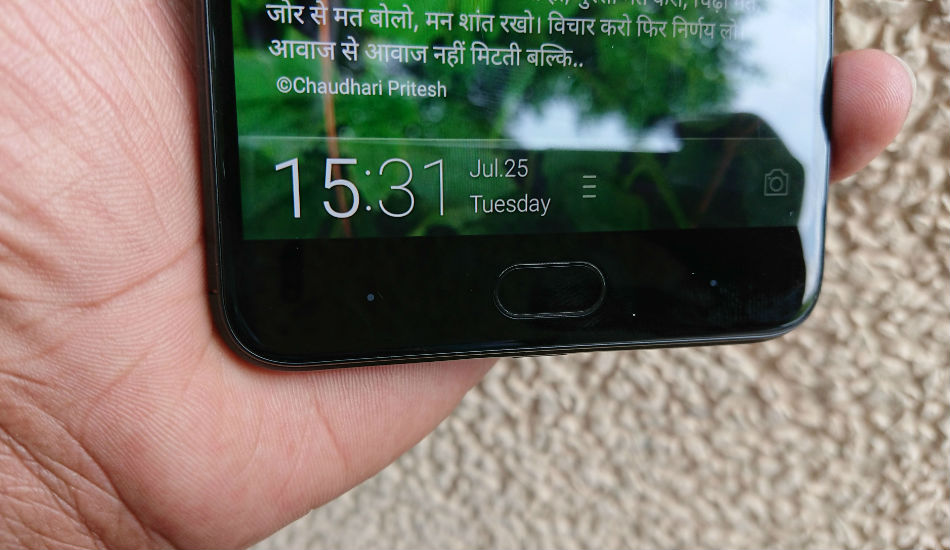 Coming to the display department, the Gionee A1 Plus sports a 6-inch Full HD display with a screen resolution of 1920 x 1080 pixels, which is protected by a Corning Gorilla Glass. Despite the said protection, we found out that the display was prone to scratches, so it is advisable to use a screen guard. The IPS LCD display is quite sharp and gives some punchy colours. The screen is bright enough for outdoor usage and viewing angles are good as well. However, the auto brightness is a bit slow to adapt to the environment and sometimes you feel that the brightness is too much, especially for an indoor condition.
Camera is the main focus, or is it?
Gionee A1 Plus flaunts dual rear cameras, which comes with a combination of 13-megapixel with autofocus, F2.0, 1/3.06 inches, 5P lens, flash and a 5-megapixel for creating bokeh effects. It features a 20-megapixel front-facing camera with fixed focus, F2.0, 1/2.8 inches, 5P lens, selfie flash. 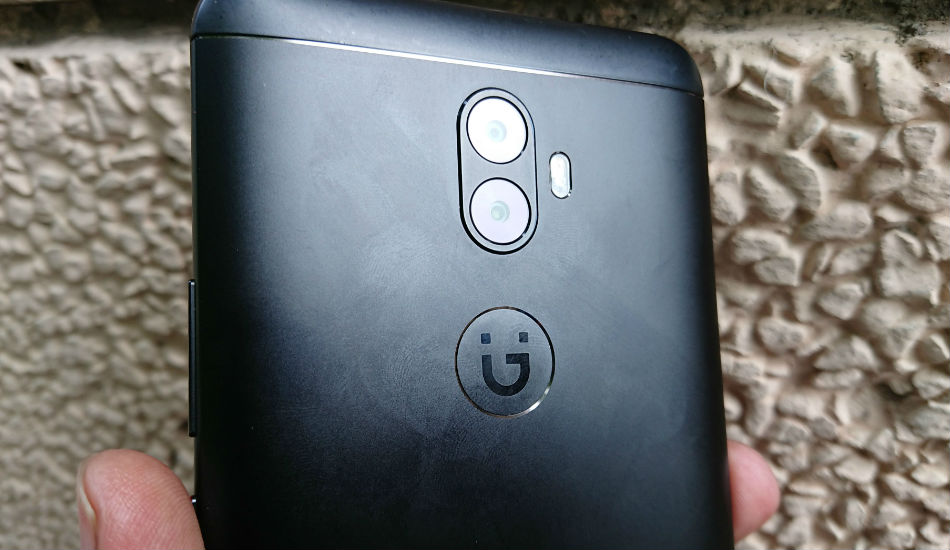 The performance of the camera came out to be a mixed bag one. Though the smartphone was able to take photos with some good detailing in broad daylight, in some photos colours were bit washed out. There is a portrait mode, which should ideally create a bokeh effect by highlighting the subject and blurring out the background. However, the results implementation is not as perfect as we have in other handsets. We felt that the effect is not properly highlighting the subject, which is not a good thing, especially at this price point.
Coming to the low-light photography, the phone has its shares of hits and misses. The photo came out to be decent, however, noises and graininess were quite prominent. The selfie camera does a decent job and it took some well-detailed shots in the broad daylight. The selfie camera also comes with a Bokeh Selfie mode, which does a decent job during our testing period.
Big on battery, not-so-big on software
Another major highlight of the device is the 4550mAh battery. We quite liked the battery performance of the device as it lasts almost one and a half day of normal use. If you are a power user then you also can expect some amount of battery remaining in this one at the end of the day. Further, the device comes with an 18W ultrafast charging technology, which the company claims can charge the device up to 2 hours. True to its words, we found that with the help of fast charging, the smartphone can be charged within 2 hours of time, which is a welcome move. Also, one can charge other devices through reverse OTG cable, which is again a good thing. 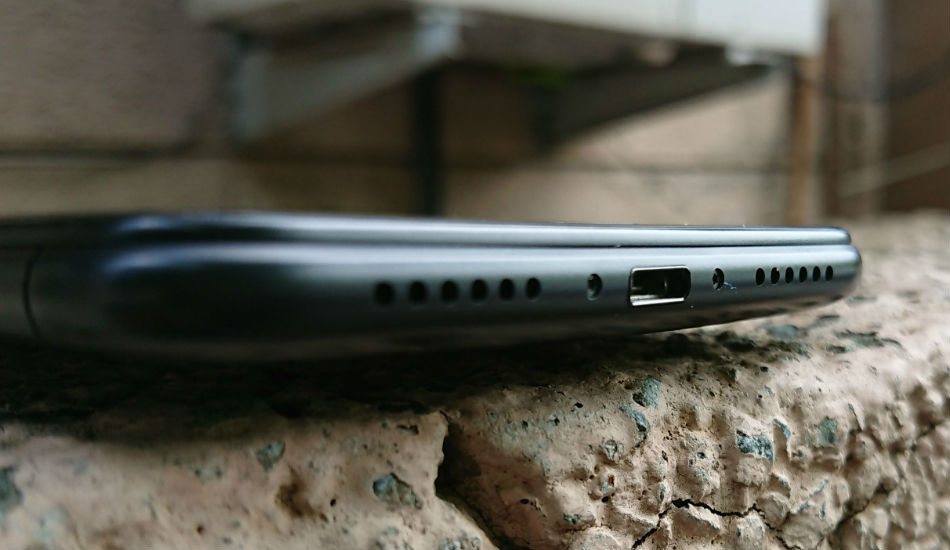 Coming to software part, the device runs on Android 7.0 Nougat with company’s Amigo 4.0 running on top of it. This is one department Gionee need to seriously look at. The user interface is quite heavy and needs some optimisation. The transitions from one screen to another feel a bit slow. Swiping down will open the notification tray while swiping from the bottom will open Setting shortcuts, which makes it a bit complex for a new user.
And yes there is no app drawer, which means that you need to scroll on the home screen to find an app. However, there some smart gestures through which one can pick up a call, pause an alarm etc. Then there is Edge Bar feature which allows you to see certain apps shortcut by sliding your finger to the left or right on the home key. One can add their favourite apps to it as well, which is a welcome move. The Suspend button is particularly useful as it is basically a floating button which has back, home and lock buttons along with the ability to squeeze the screen size. But when you compare with other manufacturers, it sure looks a bit old in use.
Modestly specced, performs decently
Gionee has been always criticised of not using a Qualcomm chipset and one can complain the same for Gionee A1 Plus. The smartphone is powered by an octa-core MediaTek Helio P25 processor along with 4GB of RAM and 64GB of internal storage, which can be further expanded up to 256GB via microSD card slot. On the connectivity front, the smartphone offers hybrid dual sim, 4G with VoLTE, WiFi (802.11 a/b/g/n/ac), micro-USB port, Bluetooth 4.0, and GPS/A-GPS. 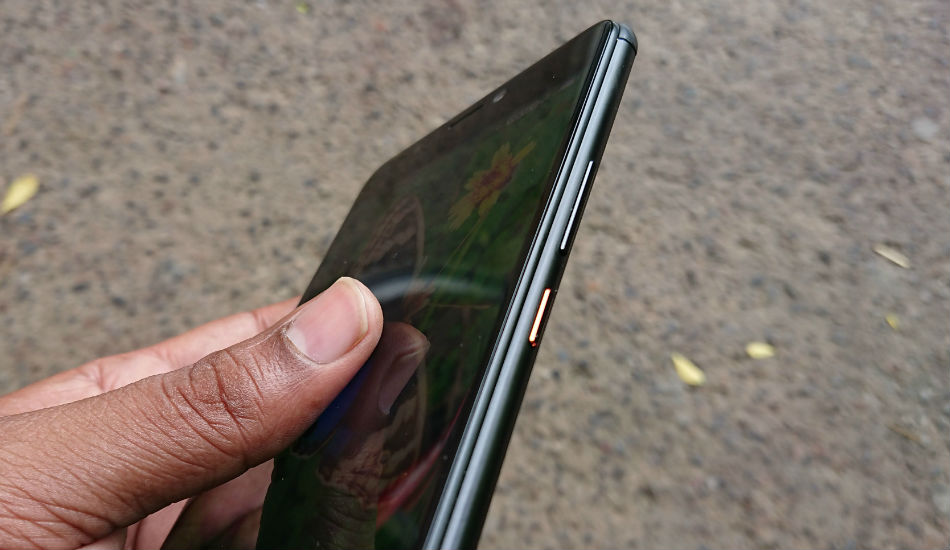 That said, the company has tried to give some interesting specs sheet but ends up with a standard one. The smartphone performs most of the daily tasks like browsing, calling, social media, music and more, quite effectively and multitasking is smooth, all thanks to the 4GB of RAM.
On the gaming front, the phone is able to handle most of the casual gaming like Subway Surfers, Temple Run 2 without breaking a sweat, but when it comes to graphic intense games like Mortal Kombat X, the phone shimmers a bit. Other than this, call connectivity is good and so is earpiece volume. The speaker grille output is pretty decent and you also get a bundled headphones, which works just fine.

To sum up, the Gionee A1 Plus has its share of hits and misses. Though the smartphone looks sturdy enough and features a good display, it is quite heavy and bit bulky in use. The smartphone performance is pretty decent. The battery backup is quite impressive but camera output could have been better.