It's time to rid the planet form the alien invasion in this interesting and addictive alien hunting game.

Repetative Not appropriate for sower devices

We have always been fascinated by aliens and extra-terrestrial creatures that how will they look and what will they do whenever we come across them. Well there have been numerous games, videos and even movies made on alien creatures and all of them always show these poor little things rain havoc on our cities. So much that whenever now aliens are being talked of, people always say that they will come and kill us and take over our plants, movies like ‘Paul – The Alien’ and ‘ET’ are exceptions though. 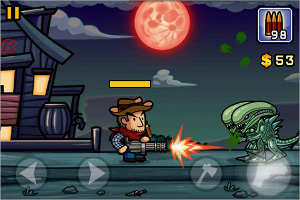 Well the game we are talking here about is yet another game where the aliens are in the bad role and the human guy is killing them to save earth. As mentioned, you will play as Rowdy (Fictional Name) – the cowboy who has no other job but to kill the aliens who otherwise will kill Rowdy. The towns and cities have already been swept clean by these aliens and as you progress you will find aliens harder and harder to kill. But there is hope as Papa Jones (again fictional) still owns a weapon shop which is open for business, supplying Rowdy with the necessary ammo to kill the intergalactic critters.

Overall a very nice game with great graphics and even better concept that promises hours of fun and game play. You get to upgrade weapons and buy ammo with the money you get per alien kill. The money that you get per alien kill also increases as you proceed. The game surely requires some amount of strategising as well in order to progress as you cannot just go ahead and kill the aliens and progress. 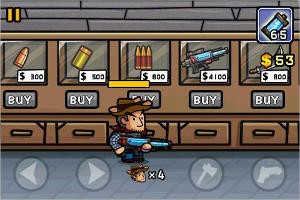 The game gives you five lives and no health upgrade option while a stage is on, so if you die you will loose one life and it is only when you reach Papa Jones’s shop you will be able to patch those wounds with a medic’s kit.

The overall quality and the sound effects of the game are great and you will not be annoyed, though the repetitive music is a bit irritating.

This game requires an Android OS 2.1+ device with a multitouch screen. You can download the Alien Invasion application on your Android device manually or can also visit the Android Market to do the same. Alternatively follow this link.