There are some phones which have some limit on the number of home screens they can have, but the installation of Go Launcher EX removes that limitation.

Good as home screen CustomisableUsers can always go back

Not themable yetStarted with a small collection

Go Launcher EX is an app for home screen replacement, which replaces the native launcher of the Android phone including the original Froyo, Gingerbread Android launchers, HTC’s Sense and Motoblur. The app is available free of cost and is meant to provide lots of customisation options and themes for the home screen of the Android smartphones. Users also have the option to download GoWidgets, including Message GOWidget, Contacts GOWidget and Calendar GOWidget. 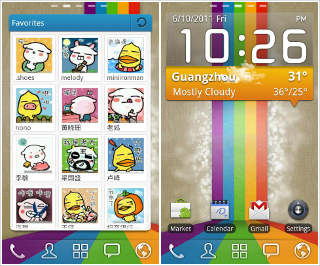 The only problem with the Go Launcher EX is the widgets themselves are not themeable. So even if the users have their favourite theme installed, chances are the colour scheme of the widgets (such as clocks or calendar on the home screen) may not work with it since they look exactly the same. At the same time, the look of icons can be changed as per the users’ need. There are some phones which have some limit on the number of home screens they can have, but the installation of Go Launcher EX removes that limitation.

There also comes a dock on-the-screen feature which can be scrolled by the users to access the shortcuts of up to 15 apps. There are other aspects of the app which can be customised as well including the status bar, hiding icon labels, increasing the grid size etc.

The app Go Launcher EX gives the users the feeling of being in control of their Android experience &#151 a big reason why such apps are popular among the Android smartphone users.

The app allows the users to back up their configurations which make them feel free to tinker with the home screen, and if they don’t like it, they can always go back to the earlier backed up home screen. In the beginning, the app started with a small collection of themes which has grown big now and there is a virtual flood in the market with numerous themes, of course of different qualities and many cost you some bucks as well.