Guided View takes panel by panel viewing approach for reading comics and the app packs a comic store with library of over 13,000 most popular digital comics.

Comics have always been the favourites across age categories. With the advent of smartphones, comics have also took a turn to satiate the thirst of digital consumers. Digital comics which provides visually rich pictures also suits the readers who want a more interactive and interesting reading experience.

The Comics app is one such application that offers several graphically rich comics in digital format for iPhone, iPad and iPod touch. Developed by ComiXology, the app comes with built-in store that enables the users to purchase the digital version of popular comics.

The interface of the app is quite uniform like that of an App store where one can see more of comic book covers here instead of App icons. Five basic options at the bottom of the App screen &#151 Featured, Popular, Browse, Purchases and Downloads are self explanatory. 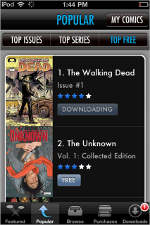 Out of these five, Browse option allows you to search for your favorite comic series via search for which you may have to manually enter the name. Alternatively, you can browse the store by Series, Publisher, Genre, Creator, Story Arcs and special Free Comics section.

Most interesting part of this app is the comic reading experience that has been devised using the Guided View technology. For the first time, the app will offer you a quick tutorial on how to go about reading the comics in the app.

The app takes user from one panel to another via animated transition instead of loading full scanned copy of the comics. For several other image readers, when you have scanned copy of a comic then you will have to zoom and swipe your finger across the screen several times to get a fairly visible view of a page. That’s what is guided view. 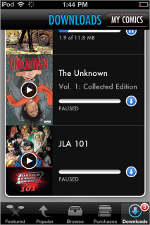 With Comics App, the comic page goes through an animated transition and the time of the same can be set in order to suit one’s need &#151 from Immediate to 1 second. Navigating through panels is simple right to left for next panel and left to right for going to previous panel.

At any point you can simply tap to get the options and tap on the pages option to jump between pages instead of swiping randomly between panels.

The core reason for choosing this app is the Guided View interface that takes comics reading to a totally different level. Users are guided through the panels in a manner that carries the continuity of the story from one panel to another. Also if there is a bigger panel, the app focuses on the speech bubbles in the panel and frames the graphics accordingly.

The Comics app is meant for every one &#151 from comic book lovers to the first time comic readers. It’s a totally different and amazing experience reading the comics on the large screen of iPad. The best part of it is that the books purchased via the app are also viewable in the web interface at the comics.comixology.com.

Currently the ComiXology store offers over 13,000 comics books in its library along with the new releases. With number new series coming in, this is one good app must have for any comics and graphics art lover. The most recent version of Comics App for iPhone, iPod touch and iPad requires iOS 4 or higher.