Users just have to make sure their Android device runs Android 2.2 or later version. Apps can be moved to an SD card through settings in Froyo as well, but that is cumbersome and App 2 SD has an easier interface.

Frees up internal storage Easy to use UI

Works on Android 2.2 and above

The Android app ‘App 2 SD’ frees up internal storage on your Android phone by moving apps to the SD card.

Since all the apps cannot be moved to the SD card, App 2 SD will tell you which apps can be moved and which cannot. 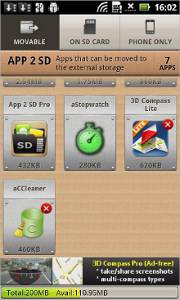 Users have to select Move to SD, and if the app is already in the SD it can be moved back by pressing the Move to Phone button. How much of the phone’s internal storage is being used can be checked at the bottom of the app’s screen.

Users just have to make sure their Android device runs Android 2.2 or better. Android has a native function that allows this function through the settings, but that is cumbersome whereas this app allows users to do the same through an easier interface.

The app also runs in the background, and whenever users install an app which can be sent to the SD card, they are informed in the notification bar.

The main options of the app include a list of movable apps, the option to move one or all apps to the SD card, clear app cached files with one tap, show the size of used apps, show total/available storage, list non-movable apps and more.