It is not only an action game, it can also be termed as a racing, RPG as well as puzzle game.

There are many types of games on the Google Play Store for Android smartphones and tablets, but most of them offer only a specific type of gameplay. For instance, Need For Speed is a racing game while Temple Run is a role playing game, which comes under the action/adventure category. There are also puzzle games.

Anger of Stick 2 combines all these genres into one. It has a normal game mode and survival mode where it plays like an action game; in which you have to beat your opponents and move forward. There are several stages and weapons too. There is a Doodle Runner mode, which is basically a running game while in the Jump Jump mode, it is both a puzzle as well as an action game.â€¨All in all, it’s a complete game and the most innovative one on Google Play.

It isn’t just about the multiple genres of the game, the gameplay in Anger of Stick 2 is also quite bewitching and will hook you for hours. In the normal game mode, you as the Stick hero, go out and fight unknown enemies with some deadly Kung Fu stunts. All in all, there are 130 combat moves! There are weapons too – from swords to heavy machine guns – which kill enemies easily. As you advance while killing enemies, you earn money and can buy weapons – like UZI, M1911, Grenade Launcher, Spas-12, SG550, Remington-870, Flamethrower, Ray-gun, Mini-gun, Bat, and the Sword. These become essential as you progress in the game as stronger and more skillful enemies come to beat you to death. 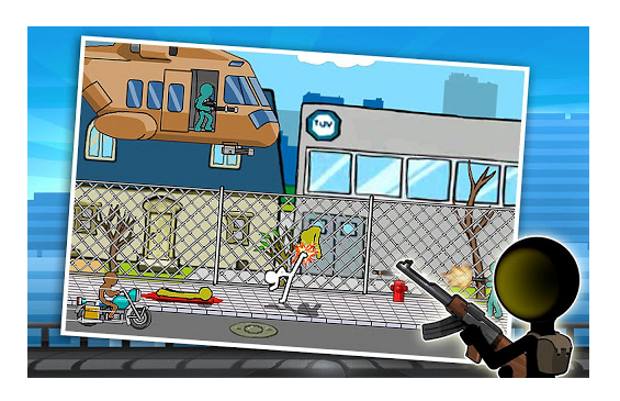 Also, there is a Helicopter and a Robot in the game, which you can operate. In the normal game mode, there are several stages with increasing difficulty. But if you think you are a better fighter and want a different environment, go to the Survival Mode, which is just mayhem. 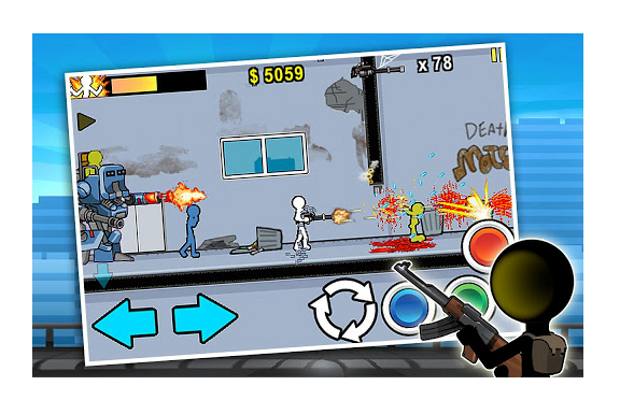 Opponents are tough and skillful and kill you from a distance even before you realise.If you are done fighting and want a puzzle, go the Jump Jump mode. Here you will see horizontal lines constantly scrolling from upwards. So you have to climb up and run as the lines come to the end of the screen and vanish. If you don’t climb up you will die. But it isn’t just about climbing up – enemies also come in your way and you have to beat them else they will kill you.

There is a simple Doodle Runner mode as well where you have to run while avoiding obstacles by high jumping, long jumping and sliding. On the way, you can collect coins too. All in all, the Anger of Stick 2 has tons of adventures and provides hours of fun for which you don’t have to pay even a penny. Thus it is not surprising that it has been given a 5 star rating by more than 30,090 users.