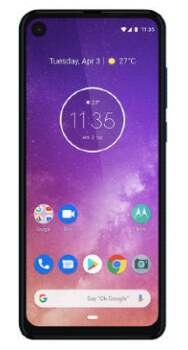 The Motorola One Action features a 6.3-inch (1080×2520 pixels) Full HD+ LCD with 21:9 aspect ratio and a screen-to-body ratio of 84 percent. It is powered by 2.2 GHz Octa-Core Exynos 9609 processor coupled with 4GB of RAM and 128GB of storage, which can be further expanded up to 512GB via micro sd card slot. The phone features a rear-mounted fingerprint scanner

On the camera front, the phone is equipped with a triple-camera setup, which comes with a combination of a 16-megapixel with 117-degree ultra-wide angle lens along with a 12-megapixel primary sensor with LED flash, f/1.8 aperture and 2.0µm Quad Pixel technology and a 5-megapixel depth sensor with f/2.2 aperture. For selfies and video calling, the phone is equipped with a 12-megapixel snapper with an aperture of f/2.0.  Motorola One Action runs on Android 9.0 (Pie) and is part of the Android One program. It is fueled by 3500mAh battery with 10W charging.