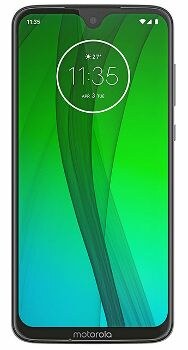 Moto G7 comes with a 6.2-inch Full HD+ display with a resolution of 1080 x 2270 pixels and pixel density of 403ppi. The display is protected by Corning Gorilla Glass 3 and comes equipped with Qualcomm Snapdragon 632 octa-core processor with a clock speed of 1.8GHz. The phone has a fingerprint sensor on the back and is splash resistant with its P2i water-repellent nano coating.

The has 4GB of RAM and 64GB of internal storage, which can be further expandable upto 512GB via microSD card slot. The device runs on Android 9 Pie operating system and gets its strength from 3,000mAh non-removable battery with 15W Turbopower charging support. It also has Face Unlock feature.