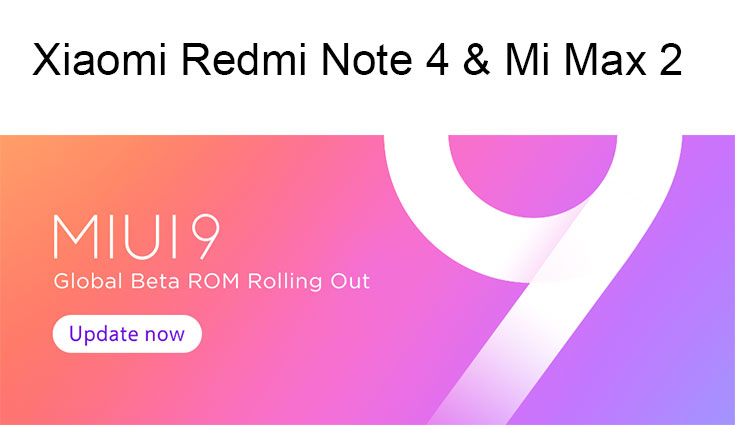 Xiaomi announced that the update will start hitting the devices in phases with Redmi Note 4, Mi Mix 2 and Mi Max 2 being the first ones to receive it.

Xiaomi Redmi Note 4 is the most sold smartphone from Xiaomi in India and when it comes to updates, the Chinese giant isn’t compromising at all. After making the Global MIUI 9 ROM official last week in a Global launch in India, Xiaomi has now started rolling out the MIUI 9 update for Redmi Note 4X and Redmi Note 4 (in India). Xiaomi announced that the update will start hitting the devices in phases with Redmi Note 4, Mi Mix 2 and Mi Max 2 being the first ones to receive it. Recently launched Redmi Y1, Y1 Lite, Redmi 4, Mi Max will receive it sometime in Mid-November and other will receive it in December 2017.

Note that, this MIUI 9 ROM is actually called as Beta Global Stable which means that it is more of a Beta version beingnearly stable than a fully stable ROM. So the OTA update might take some time to reach you as Xiaomi will be testing this update with a bunch of users first. Once they get a green signal from there, Xiaomi will then begin the OTA rollout for everyone.

At the moment, the update can be flashed via fastboot, a full guide to which can be found here. Also, you can get all the download links for MIUI 9 here

Talking about MIUI 9, Xiaomi has finally added split-screen functionality which would now allow you to use two apps simultaneously. Adding a pinch of smartness to the UI, the new MIUI 9 comes with smart image search, smart assistant, and smart app launcher. Also, notifications are now bundled and ‘Quick Reply’ has finally made its way to MIUI. Even though a lot of Xiaomi smartphones came with Android 7.0 Nougat out of the box, some of the features which were native to Android Nougat didn’t get incorporated due to MIUI being a completely different Android experience.

Further, Xiaomi has stated that MIUI 9 significantly bumps up the performance metrics of all the devices which receive it. So much so that it can now compete with Stock Android which is still considered the most fluid Android experience. Redmi Note 4 has been lauded a lot in India and till August 2017, the company had already sold 5 million units of the same. With MIUI 9 first out for Redmi Note 4, Mi Mix 2 and Mi Max 2, you now have another reason to buy these smartphones.