Xiaomi Redmi S2 confirmed to be launched on May 10

The Xiaomi Redmi S2 will be the company's first smartphone under new Redmi S series.

Xiaomi has today officially confirmed the launch date of its upcoming Redmi S2 smartphone. The smartphone will be announced on May 10 in China under a new S series. The Xiaomi Redmi S2 will be the company's first smartphone under new Redmi S series.

The company has released a post confirming the launch date on its official Weibo (microblogging website) handle. The teaser shows Chinese actor Liu Haoran holding the Redmi S2 phone and mentioning the launch date as May 10. Also, the Redmi S2 is advertised as a selfie phone. So it is now expected that the new Redmi S series might feature selfie-centric smartphones. 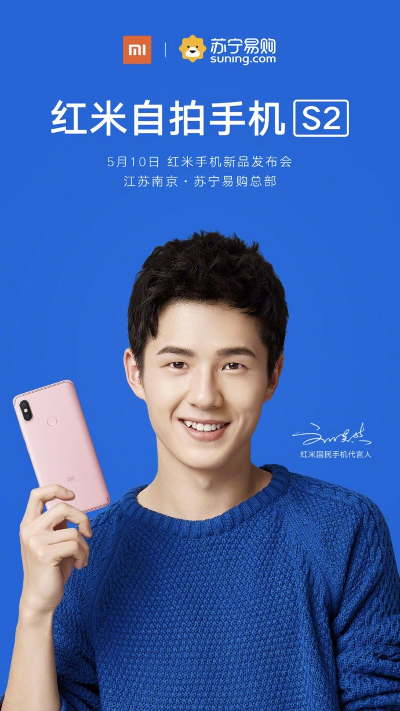 As per earlier reports, the Redmi S2 is said to be coming with a 5.99-inch HD+ featuring 1440 x 720 resolution and two rear cameras including a 12-megapixel primary sensor and a secondary 5-megapixel sensor. There will also be a 16-megapixel front-facing shooter for selfies. Besides, it is expected to have the MIUI 9 user interface based on Android 8.1 Oreo operating system. There's a rear-mounted fingerprint sensor as well.

Xiaomi Redmi S2 is also expected to come in 2GB, 3GB and 4GB RAM versions with 16GB/32GB/64GB internal storage - all with a 2.0 GHz octa-core Snapdragon 625 processor. Ther will be also an option to expand the storage using a microSD card.  A 3080 mAh battery is expected in the phone which is granted to come with 4G VoLTE, Bluetooth, WiFi, GPS/A-GPS and a micro USB port like most Android phones.

Rumours say that the Xiaomi Redmi S2 might be priced at 3,999 VND in Vietnam which is approx. Rs 8,340. After China's launch, the mid-range Android smartphone is also expected to be launched in India later this month.